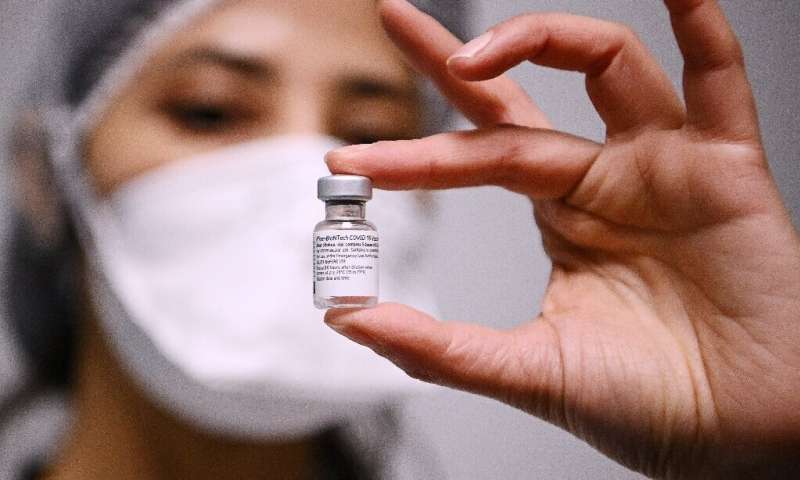 Roughly one in a hundred thousand people who received the Pfizer-BioNTech COVID-19 vaccine have had severe allergic reactions, US health officials said Wednesday while stressing that the benefits of immunization greatly outweigh the known risks.

The data comes from the Centers for Disease Control and Prevention, which documented 21 cases of anaphylaxis after administration of a reported 1,893,360 shots from December 14 to December 23.

“This averages out to a rate of 11.1 anaphylaxis cases per one million doses administered,” senior CDC official Nancy Messonnier told reporters.

By comparison, flu vaccines cause about 1.3 anaphylaxis cases per million doses administered, and so the rate of anaphylaxis for the Pfizer vaccine is roughly ten times greater.

Messonnier added that anaphylaxis cases were still “exceedingly rare” and it remains in people’s best interest to take the vaccine, particularly in the context of the COVID-19 pandemic that is a far greater danger to their health.

“A good value proposition for someone to get vaccinated is their risk from COVID and poor outcomes from COVID is still more than the risk of a severe outcome from the vaccine,” she said.

The 21 cases ranged in age from 27 to 60 years old, with a median age of 40, and all but two were treated with epinephrine.

Nineteen of the cases (90 percent) occurred in females, and the median onset time of symptoms was 13 minutes, but ranged from two to 150 minutes.

Four (19 percent) of patients were hospitalized, including three in intensive care, and 17 (81 percent) were treated in an emergency department. All but one was known to have been discharged home or recovered at the time of the study, and there were no deaths.

The US has so far authorized two vaccines for emergency use—one developed by Pfizer and the other by Moderna.

Both are based on cutting-edge mRNA (messenger ribonucleic acid) technology and authorities have attached similar warning labels to both, which advise that people who have a known history of allergic reactions to the vaccines’ ingredients avoid taking them.

People who have a severe reaction to the first dose are also asked to not take a second dose.

Messonnier said that investigations were underway to determine what may be the cause of the allergies.

There is not enough data yet to know what the rate of anaphylaxis is for the Moderna vaccine, which was authorized in the US a week after the Pfizer shot, or whether a significant difference between the two vaccines will emerge.

One preliminary hypothesis for the reactions is the presence of the compound polyethylene glycol (PEG), which has never before been used in an approved vaccine, but is found in everyday products including laxatives, shampoos and toothpastes.