Why Covid is not over, even if worst of pandemic is: 2022 hits ‘tragic milestone’ of ONE MILLION virus deaths, World Health Organization says… with a fifth in the US

World hits ‘tragic milestone’ of one million Covid deaths in 2022, the World Health Organization has confirmed.

Nearly 6.45million deaths have been reported to the WHO since the virus was first detected in China in late 2019.

Dr Tedros Adhanom Ghebreyesus, head of the UN agency, said the world could not claim that it is ‘learning to live with Covid’ when the virus death rate is still high — despite having ‘all the tools’ needed to prevent deaths.

Vaccine industry experts said ‘a very real human tragedy’ was behind every death and urged people not to ‘become numb’ to the toll of the pandemic on people, families and communities

The WHO called on nations to take action to impose ‘proportionate’ Covid curbs to limit transmission, continue to offer tests and sequence positive samples, rollout access to life-saving drugs and boost vaccination drives.

Countries worldwide continue to dish out Covid jabs and have launched booster campaigns ahead of an expected surge later this year. And scientists remain on the lookout for mutations in the virus through surveillance schemes.

But most countries have eased or lifted restrictions such as mask-wearing and social distancing and limited access to tests due to the success of vaccination campaigns and the emergence of the milder Omicron strain.

Global cases are currently a fifth of the Omicron winter peak, although the figure has been impacted by a reduction in testing. However, UK surveillance data today showed that infections have are in decline. 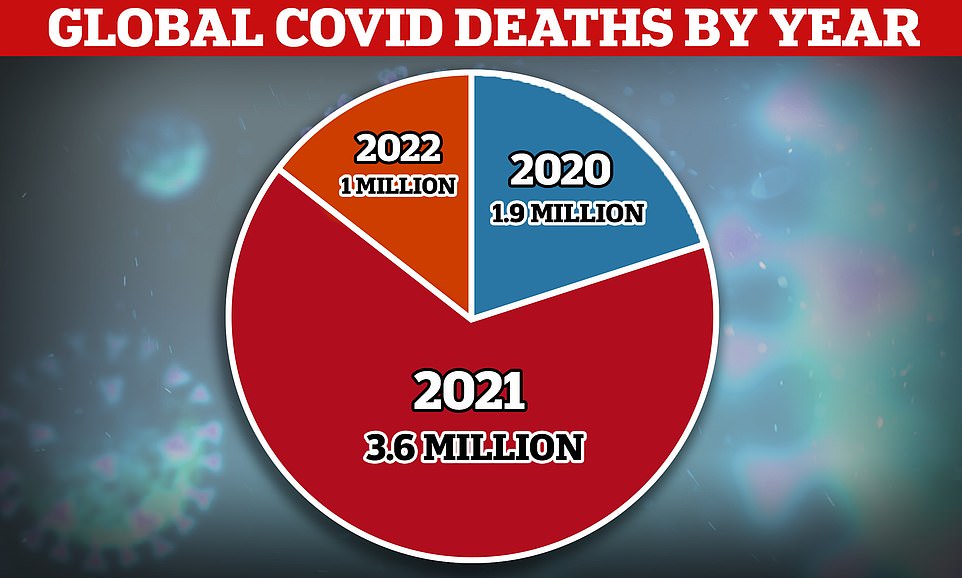 The graph shows the number of Covid deaths logged by year. Nearly 2million were registered in 2020, with the rate doubling to 3.6million in 2021. One million have been logged in the first eight months of 2022 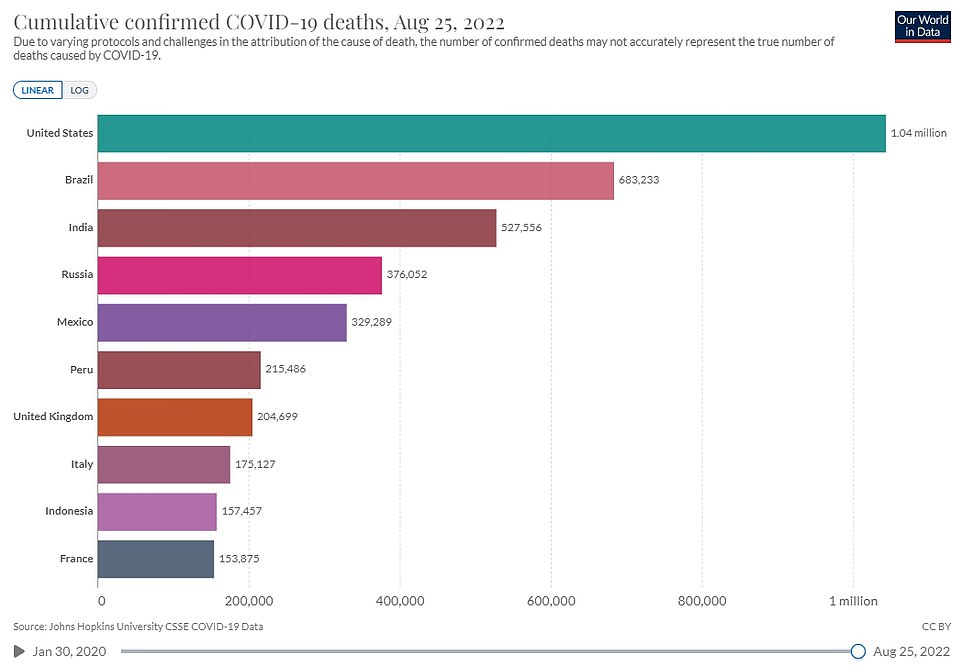 The World Health Organization confirmed more than one million people worldwide had died with Covid in 2022. Figures from Oxford University research platform Our World in Data show the vast majority of fatalities were logged in the US (1million), followed by Brazil (683,233), India (527,556) and Russia (376,052) 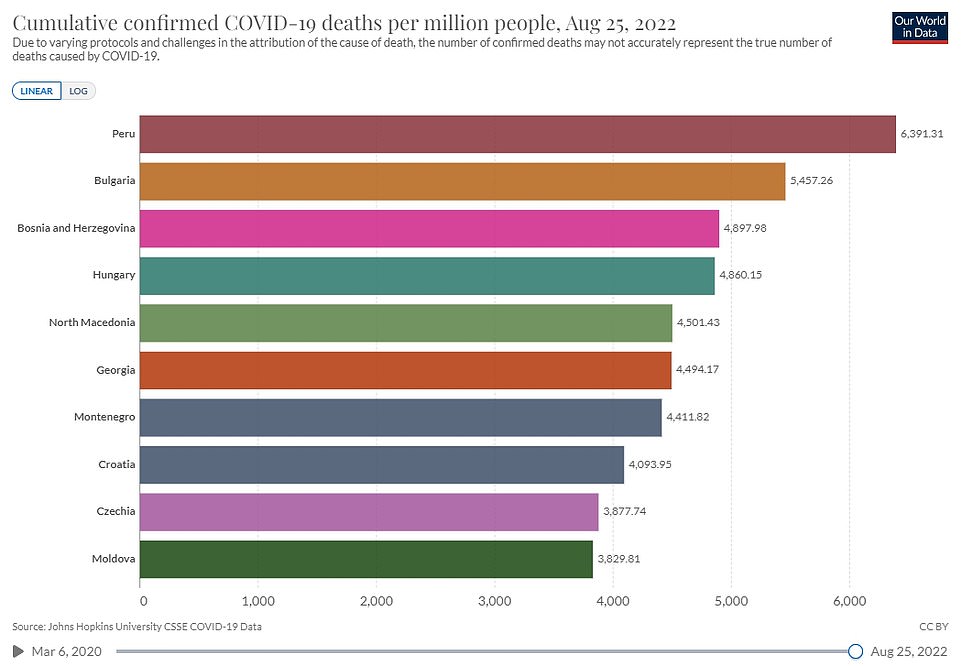 Our World in Data figures show that

Dr Ghebreyesus said: ‘This week, we crossed the tragic milestone of one million reported deaths so far this year,’ he told a press conference.

‘We cannot say we are learning to live with Covid when one million people have died with Covid this year alone, when we are two-and-a-half years into the pandemic and have all the tools necessary to prevent these deaths.

‘We ask all governments to strengthen their efforts to vaccinate all health workers, older people and others at the highest risk, on the way to 70 per cent vaccine coverage for the whole population.’

He previously urged countries to have vaccinated 70 per cent of their populations by the end of June.

But 136 countries failed to reach the target, of which 66 still had coverage below 40 percent.

Dr Ghebreyesus said only 10 countries had less than 10 per cent coverage, most of which were facing humanitarian emergencies.

He said: ‘It is pleasing to see that some countries with the lowest vaccination rates are now making up ground, especially in Africa.

‘However, much more needs to be done. One-third of the world’s population remains unvaccinated, including two-thirds of health workers and three-quarters of older adults in low-income countries.

‘All countries at all income levels must do more to vaccinate those most at risk, to ensure access to life-saving therapeutics, to continue testing and sequencing, and to set tailored, proportionate policies to limit transmission and save lives.’

Dr Derrick Sim, managing director of the Gavi, an international vaccine alliance to boost access to the world’s poorest countries, said one million deaths in 2022 was a million too many.

He said: ‘Behind each statistic is a very real human tragedy, and as… the world deals with competing priorities, we cannot become numb to the toll the pandemic is having on individuals, families, and communities.’

More than 593million Covid cases have now been reported to the UN health agency.

Despite testing rates dropping sharply in many countries, around half of all cases were reported this year.

The Omicron variant accounted for 99 per cent of virus samples collected in the last 30 days that have been sequenced and uploaded to the GISAID global science initiative.

Of these, the BA.5 group of Omicron sub-variants remain globally dominant at 74 percent.

‘There is increasing diversity within BA.5 descendent lineages, with additional mutations in the spike and non-spike regions,’ the WHO said.

Covid is STILL shrinking: Cases fall by another 15% in England to lowest level in two months, major testing survey reveals

England’s Covid infections have continued to fall to their lowest level in two months, a major testing survey revealed today.

Office for National Statistics (ONS) analysts estimate around 1.2million had the virus on any given day in the week ending August 16. Cases were down 15 per cent on the previous week.

Infections also fell in Scotland, Wales and Northern Ireland, while also dropping in every age group and region in England.

Statisticians said cases ‘continue to head in the right direction’, with the lowest levels seen in school-age children, who are on their summer holidays.

Sarah Crofts, head of analytical outputs for the Covid Infection Survey, said: ‘Infections continue to head in the right direction across all of the UK and are now at levels similar to those last seen in mid-June.

‘Rates remain lowest in school-aged children and we will closely monitor the data to see how the return of schools in September may affect this.’