Let them eat cake! 3/4 of Brits say it IS acceptable to bring treats into office as they lash out at food tsar’s ‘joyless’ warning that it’s just as bad as passive smoking… so how calorific really is a slice of Colin?

Cakes are brought into offices to celebrate practically anything, from birthdays to leaving-dos and even the relief of reaching 3pm on a Friday afternoon.

But sharing a celebratory sweet treat among colleagues was today controversially compared to being as harmful as passive smoking by the Government’s food tsar.

Even Rishi Sunak hit back at the warning, with the PM’s advisers revealing that he was ‘very partial’ to a slice of carrot cake.

Leading experts today hit back at the parallels drawn to the toxic effects of second-hand smoking, arguing that cake ‘is simply a type of food’ which can be enjoyed in moderation. But they insisted it should not be a daily treat.

Servings of cakes sold on the High Street — like M&S’ loved Colin the Caterpillar — can contain more than 450 calories and 60g of sugar, MailOnline analysis shows. 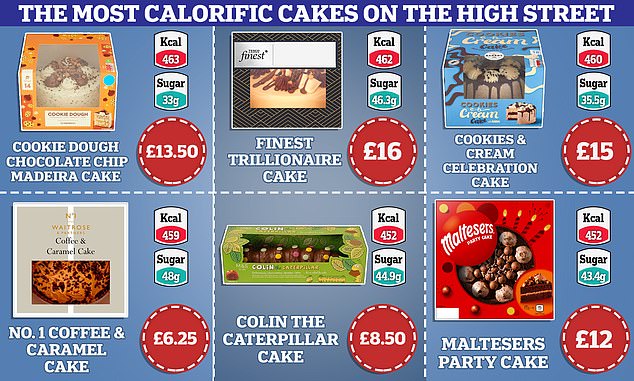 MailOnline looked at 160 cakes available on the high street shows that. The most calorific option was Sainsbury’s Cookie Dough Chocolate Chip Madeira Cake (top left). Tesco’s Finest Trillionaire Cake was also among the worst offenders (top middle). A Cookies and Cream Celebration Cake at Asda (top right) has 460 calories per 100g and 48g of sugar. The most calorific option at Waitrose is the Coffee and Caramel Cake (bottom left). At M&S, the least healthy cake is its famous Colin The Caterpillar Cake (bottom middle). Available at Asda, Sainsbury’s and Tesco, the Maltesers Party Cake (bottom right) is also one of the least healthy options 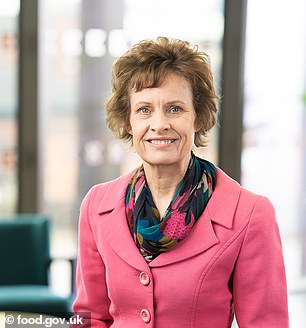 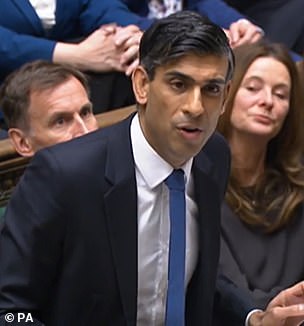 Professor Susan Jebb, chairwoman of the Food Standards Agency, says bringing cake into work is as harmful to colleagues as secondhand smoking. But Rishi Sunak’s spokesperson said the PM believes that personal choice should be baked into our approach 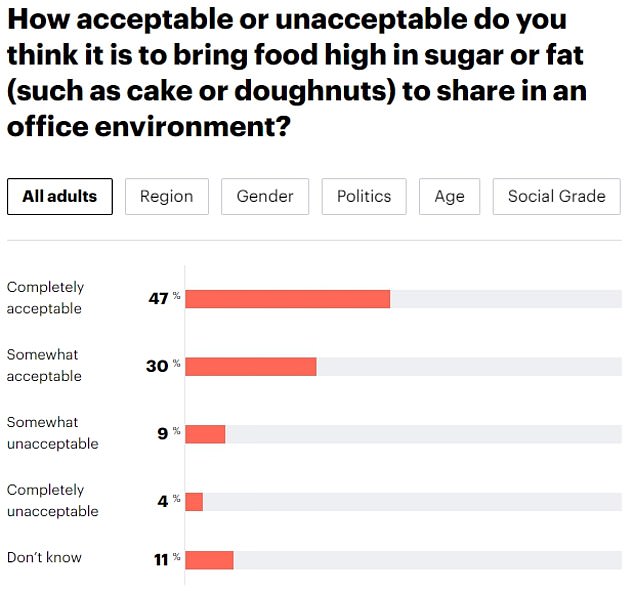 Professor Jebb told The Times: ‘If nobody brought in cakes into the office, I would not eat cakes in the day.

‘But because people do bring cakes in, I eat them. Now, okay, I have made a choice. But people were making a choice to go into a smoky pub.’

Professor Jebb noted the two situations were not identical — but warned the effects of smoking caused harm to others ‘and exactly the same is true of food’.

But she added: ‘With smoking, after a very long time, we have got to a place where we understand that individuals have to make some effort but that we can make their efforts more successful by having a supportive environment.

‘But we still don’t feel like that about food.’

Mr Sunak pushed back against the comments.

Asked what he made of the suggestion that office cake and passive smoking were comparable, the PM’s official spokesperson said: ‘No. The Prime Minister believes that personal choice should be baked into our approach.

‘We want to encourage healthy lifestyles and are taking action to tackle obesity, which has cost the NHS £6billion annually.

‘However, the way to deal with this issue is not to stop people from occasionally bringing in treats for their co-workers.’

Mr Sunak’s press secretary added that he is ‘very partial to a piece of cake’ and most enjoys carrot and red velvet cake.

Aides underlined the message by bringing in cupcakes for journalists at a briefing after the weekly PMQs session.

‘Unless you take cake to work and smash into the faces of your colleagues, I fail to see how it could be like passive smoking,’ another Twitter user said.

Others accused her of being ‘bitter that no one brought cake into the office’ for her birthday.

Professor Jebb’s comments also sparked social media backlash with Brits, who said comparing cake at work with exposure to cigarette smoke as ‘joyless’. ‘Unless you take cake to work and smash into the faces of your colleagues, I fail to see how it could be like passive smoking,’ another Twitter user said. Others accused her of being ‘bitter that no one brought cake into the office’ for her birthday

The majority of the public also disapprove of Professor Jebb’s stance.

A poll by YouGov, which asked more than 5,000 Brits what they think about bringing unhealthy foods to the office, revealed that 77 per cent think it is either ‘completely’ or ‘somewhat’ acceptable.

However, MailOnline findings shows just how bad cakes can be for the waistline, when consumed in excess.

Analysis of 160 cakes available on the high street shows that, per 100g, the treats can contain nearly 500 calories and 15 teaspoons of sugar.

The most calorific option was Sainsbury’s Cookie Dough Chocolate Chip Madeira Cake, which is a sponge cake decorated with cookie crumb frosting.

It has 462 calories, as much as two-and-a-half Krispy Kreme Original Glazed doughnuts and 44.9g of sugar, which is equivalent to two chocolate muffins.

A Cookies and Cream Celebration Cake at Asda, made with chocolate and madeira sponges and cookie-flavoured icing, has 460 calories per 100g and 48g of sugar.

For context, an average man is supposed to consume around 2,500 calories per day to maintain weight, while a woman needs around 2,000.

And adults should eat no more than 30g of free sugars daily, which are those added to food and drink, as opposed to those found naturally in milk, fruit and vegetables.

The most calorific option at Waitrose is the Coffee and Caramel Cake — coffee sponge with salted caramel buttercream — which has 459 calories and 35.5g of sugar per 100g.

This is around as many calories as a large McDonald’s Chocolate Milkshake (468) and more sugar than a can of Coca Cola (35g).

At M&S, the least healthy cake is its famous Colin The Caterpillar Cake — a chocolate sponge roll filled with chocolate buttercream — which has 452 calories and 46.3g of sugar per 100g slice.

Available at Asda, Sainsbury’s and Tesco, the Maltesers Party Cake is also one of the least healthy options — with 452 calories and 33g of sugar per 100.

This more than two Kit Kat Chunky bars (203 calories) and nearly as much sugar as a Twix Xtra bar.

However, many of the supermarkets recommend that a slice is between 50 and 75g counts as one serving, rather than 100g.

And experts insist that the occasional sweet treat is fine as part of a balanced diet.

Professor Gunter Kuhnle, an expert in nutrition at the University of Reading, told MailOnline that ‘even the NHS Eatwell guide includes treats such as cake’.

‘A balanced diet can include many things, and cakes can definitely be part of that,’ he said.

Professor Kuhnle said the FSA chair’s comparison of smoking and cakes at work is ‘not very helpful’.

He noted: ‘Second hand smoke is clearly toxic whereas cake is simply a type of food.

‘It also ignores the fact that food is not just there to provide energy but has an important social role.

‘Cakes in the office maintain relationships and can have an important role there.’

Dr Duane Mellor, a registered dietitian and researcher at Aston Medical School in Birmingham, told MailOnline that cakes are often brought to work to bring people together — ‘something that we have missed whilst working from home’.

He said: ‘Perhaps in workplaces we need to discuss and agree limits so cakes are not daily, and they are not placed [in a way that makes] it harder for those trying to avoid temptation and eat healthily.

‘Cakes, typically by their nature, are higher in calories and sugar, so perhaps trying to bring in tasty by lower calorie versions — which could be homemade — also cutting into smaller slices can help.

‘Sharing food with others is part of human culture, part of how we share ideas and build teams, perhaps just like many things at work maybe some boundaries could be helpful.’

He said it is concerning that a food-related behaviour has been ‘linked to tobacco’.

‘This is an unhealthy view, as eating is not something that is done or not done, unlike smoking, and this approach to foods — even cakes — can lead to a dysfunctional relationship with food,’ Mr Mellor said.

Professor Jebb’s comments come as England is in the grips of an obesity crisis, with around two-thirds of over-16s overweight or obese and one in three 10 and 11-year-olds obese.

The epidemic is estimated to take up £6.1billion of the NHS budget every year due to illnesses and disease linked to people’s weight. The figure is set to rise to £9.7billion per year by 2050, as the nation becomes even fatter.

Being an unhealthy weight raises the risk of serious and life-threatening conditions, such as type 2 diabetes, heart disease, some cancers and strokes.

Meanwhile, passive smoking increases the risk of developing the same health conditions as smokers, such as some cancers, heart disease and strokes.

The NHS says that even those who have never smoked see their risk of lung cancer increase by around a quarter if their partner smokes.