Home » Health News » A beautiful Japanese garden in a Central Coast suburb? You better believe it

Tucked behind the Gosford Regional Art Gallery is the unexpected pleasure of a really good Japanese garden. The unlikely treasure is the Edogawa Commemorative Garden, which began life in 1990 as an idea to physically represent the sister city relationship between Gosford and Edogawa City, one of the wards of the Tokyo Metropolis.

Edogawa offered a donation towards an authentic Japanese garden and Gosford came up with the site of a decommissioned sewerage treatment plant on Caroline Bay, part of the extensive crinkles of inlets, bays, islands, beaches and peninsulas of Brisbane Waters. 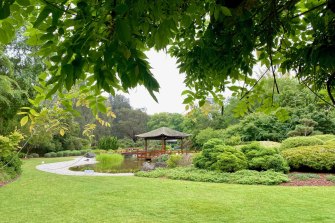 Sydney-based designer Ken Lamb, of Imperial landscapes, was given the job. His brief was to create a Japanese stroll-style garden. It aimed to marry the cultural and philosophical values that are embedded in Japanese gardens with enough Australian plants and materials to demonstrate the cultural sharing and understanding that is the essence of the sister city movement – all in a public garden of half a hectare.

Stroll gardens developed through the Edo period in Japan and they often incorporated elements from older gardens and famous places. These were large gardens designed as a walk through ever-changing views. The walk would be sensually and aesthetically pleasing, while also making cultural, philosophical and spiritual references. Some of the most famous of the extant Japanese stroll gardens include Kenrokuen in Kanazawa, Rikugien in Tokyo and Kinkakuji (the Golden Pavilion), in Kyoto. 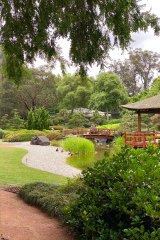 Have a break from the beach with a Japanese garden stroll if you’re on the Central Coast this summer.Credit:Robin Powell

A stroll through the Edogawa Commemorative Garden passes streams and waterfalls, squeezes through narrow passages and opens into big vistas, moves from manicured gardens through wilder, more ‘natural’ sections, offers seats for contemplation at a dry gravel garden and reflects a charming tea pavilion in the still waters of a lake. A koi pavilion and curving bridge reference the Heian period gardens of the 9th and 10th centuries when wealthy nobles enjoyed their gardens while floating on boats on extensive lakes. There are hills and valleys, densely planted areas and wide open lawns – and, after 25 years, beautifully formed trees.

The use of Australian plants is fascinating. The soft, fine, slightly weeping habit of Baeckea virgata is perfectly suited to clipping into boulder-like forms, as is the more commonly used westringia. Banksia spinulosa makes medium-sized mounds; lillypillies are background trees, and behind the gravel garden is a forest of casurinas. These complement and contrast with the traditional plants of the Japanese garden – azaleas and black pines, wisteria and iris.

Materials too were sourced locally. The supports for the teahouse and koi pavilion are ironbark, the six-metre curving bridge is Australian cypress, built by a local family of boatbuilders, and the rocks are locally quarried basalt.

The interplay of Japanese style and Australian materials is perhaps most beautifully captured in the window cut into the back of the tea pavilion which looks over the mangroved edge of Caroline Bay. The twisted trunks of the mangroves appear as calligraphic forms against the light-reflecting sheet of water, just like an ink-brush painting.

If holidaying on the Central Coast this summer, you could sit beneath this window and look out at the koi pavilion and bridge framing the lake and its little white gravel beach, while considering the intricacies of cultural exchange – or you could just appreciate the bird song, the breeze and the views – and a break from beach life.