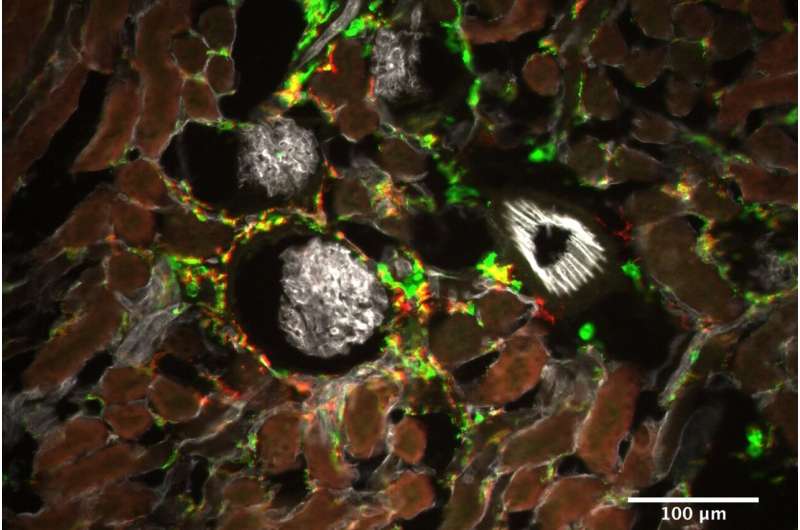 The immune system is highly complex. For example, a particular class of cells called mononuclear phagocytes (MNPs) plays important roles in the uptake and disposal of damaged cells, the elimination of invasive pathogens and other foreign bodies, and the regulation of immune responses. This set includes cells known as macrophages, dendritic cells and monocytes, which together form a complex network that carries out a range of functions in the kidney.

With the aid of a new mouse model, Barbara Schraml and her colleagues at LMU’s Biomedical Center have now demonstrated that a distinct subgroup of mononuclear phagocytes protects the kidneys against toxic damage.

“There are several precursors that can give rise to these immune cells, but they all differentiate into cells that look very similar,” says Schraml. The important question is whether MNPs that differ in their origins also perform different functions during immune responses. In a previous study, she had shown in mice that MNPs originate from different source populations in an age-dependent manner—the earliest develop from the yolk sac, while later populations are derived from hematopoietic stem cells or dendritic cell precursors. These findings led her to suspect that diverse populations might also give rise to cells that play distinct roles in the response to kidney damage.

To test the idea, she set out to selectively deplete each of the different subtypes of mononuclear phagocytes in the kidney. A number of experimental strategies can be used to eliminate specific cell types in this organ, but all of them result in the loss of various subtypes of MNPs. “Paradoxically, in one study, depletion of mononuclear phagocytes was associated with increased damage to the kidney following exposure to a potent chemotherapeutic agent, whereas the effect on the kidney in a similar study was minimal,” says Schraml. How can that be?

To clarify the reasons for this difference, she developed mouse models, which allowed distinct subtypes of MNPs to be specifically knocked out in the kidney. “With aid of these model, we were able to show that what are known as Type 1 and Type 2 dendritic cells play little or no role in the context of acute toxic damage to the kidney,” Schraml says. “Depletion of either of these two subtypes has negligible consequences for toxic damage to the organ.” In contrast, when the team eliminated a third subtype called CD64-positive MNPs, the damage to the kidney was clearly exacerbated. “This subtype must therefore have a protective role, at least in the context of acute kidney damage caused by toxic chemicals,” Schraml concludes.