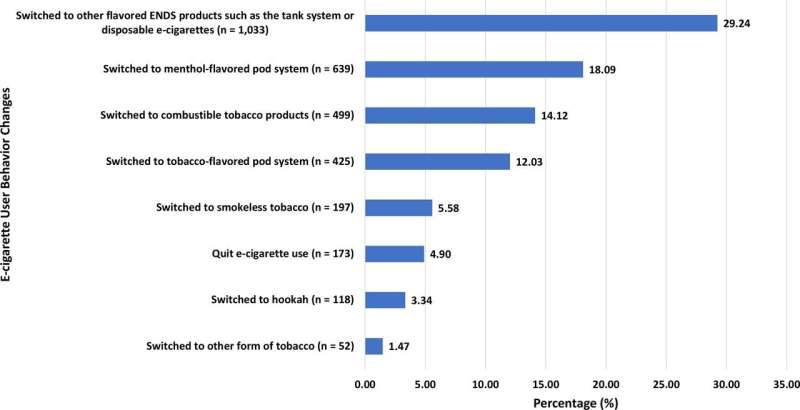 On February 6, 2020, the U.S. Food and Drug Administration banned the sale of many flavored e-cigarettes, with some important exceptions. According to a survey conducted by University of Rochester Medical Center (URMC) researchers, the ban did not result in adults quitting e-cig use and may have driven some back to smoking regular cigarettes. The researchers point to policy loopholes as the main reasons the policy failed to push people to quit.

Survey results, published in Tobacco Control, show that less than five percent of the 3,500 adult e-cig users who responded to the survey quit using e-cigs in response to the flavored e-cig ban. The rest of the respondents switched to other forms or flavors of e-cigs not covered by the ban or other types of tobacco products.

“An increasing body of literature shows that e-cig flavors themselves cause damage when inhaled, so it makes sense to ban flavors,” said Deborah J. Ossip, Ph.D., a tobacco research expert and professor in the Department of Public Health Sciences and Center for Community Health and Prevention at URMC who co-authored the study. “But the ban doesn’t appear to be working. People—including youth—can still get flavored products and are still using them.”

A large part of the problem, according to lead study author Dongmei Li, Ph.D., associate professor of Clinical and Translational Research, Obstetrics and Gynecology and Public Health Sciences at URMC, is that the ban didn’t cover newer products, like disposable e-cigs and e-cigs that use tanks rather than cartridges/pods.

“Other forms of flavored ecigs, especially disposable e-cigs, have become very popular after the FDA policy,” Li said. “The FDA policy also did not ban menthol or tobacco flavored products—and our study shows many people switched to menthol flavored e-cigs after the ban. It seems many people find menthol to be a nice flavor.”

According to the study, nearly 30% of survey respondents switched to tank-based or disposable flavored e-cigs and another 30% switched to menthol or tobacco-flavored pods. Some people reported switching to traditional tobacco products: 14% switched to combustible products, like cigarettes, and 5% switched to smokeless tobacco (i.e. chew or dip). Fewer than 5% of respondents quit using e-cigs after the FDA ban.

On the other hand, people who used flavored e-cigs without nicotine had a higher likelihood of quitting e-cigs. Though the study was not designed to show causation, this association supports previous research that suggests lowering the amount of nicotine in cigarettes could help smokers quit. However, further research is needed to better understand the relationship between low-nicotine e-cig use and quitting vaping.

Moving forward, Li believes that the policy could be effective if it covered all flavored e-cigs (including menthol flavor and all e-cig types) and if there was active monitoring of the policy implementation and compliance. “Both are important in helping reduce the epidemic of e-cig use among young adults in the U.S.,” she said.