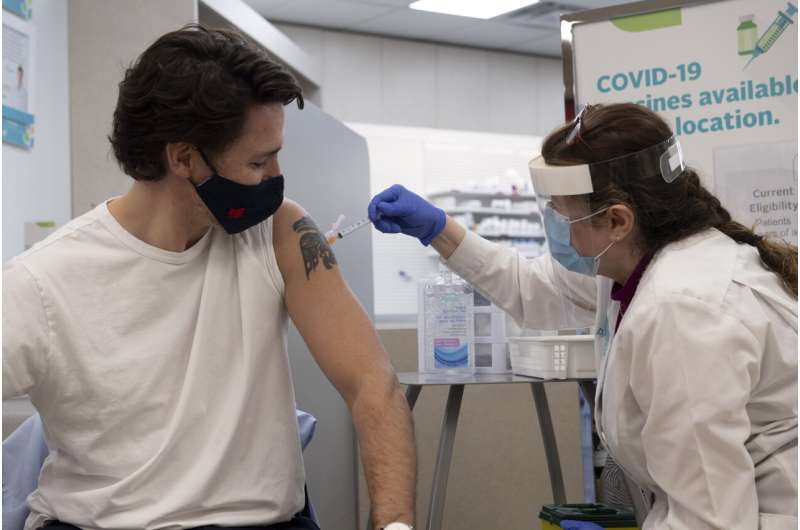 Canada’s largest province said Tuesday it will stop giving out first doses of the Oxford-AstraZeneca coronavirus vaccine due to concerns over its link to rare blood clots.

Ontario’s chief medical officer for health, Dr. David Williams, said the decision was made out of an abundance of caution because of increased instances of the rare blood clotting disorder linked to the shot.

AstraZeneca is restricted in some European countries because of a potential link to extremely rare blood clots.

“Over the last few days there have been increased reports,” Williams said. “We are reviewing the data to consider options for the use of the AstraZeneca vaccine for second doses and more broadly.”

In Canada, at least 12 cases have been confirmed out of more than 2 million doses given, and three women have died.

Dr. Andrew Morris, a professor of infectious diseases at the University of Toronto and the medical director of the Antimicrobial Stewardship Program at Sinai-University Health Network, does not believe Canada should be using AstraZeneca any longer now that Canada has large supplies of other vaccines.

Morris said experts don’t know yet what to do about people who got only the first dose. Health officials are awaiting results of a clinical trial in the United Kingdom looking at giving a different vaccine for the second dose. That would allow people who got AstraZeneca first to be given Pfizer or Moderna for their second dose.

Alberta is also no longer administrating first doses of the AstraZeneca vaccine but only because of a lack of supply.

Pfizer and Moderna are sending more than enough doses to vaccinate every Canadian with two doses eventually.

Trudeau said almost 50% of eligible adults in Canada have received at least one shot of a coronavirus vaccine. Most of that is Pfizer and Moderna.

“A one-dose summer sets us up for a two-dose fall when we’ll be able to talk about going back to school, back to work, and back to more normality,” Trudeau said.

Canada has lagged in vaccinating its population because it lacks the ability to manufacture the vaccines and like many countries has had to rely on the global supply chain for the shots. Trudeau’s government bet on seven different vaccines manufactured elsewhere and secured advance purchase agreements—enough to get 10 doses for each Canadian.

But initial supply chain difficulties forced Canada to extend the time between the first shot and the second by up to four months so that everyone can be protected faster with the initial dose. The hope is to get all adults at least one shot by the end of June. About 3% of eligible Canadians are fully vaccinated.

Regulators have approved the Pfizer, Moderna, AstraZeneca and Johnson & Johnson vaccines for use in Canada.

But plans to distribute the first 300,000 doses of the Johnson & Johnson vaccine are on hold after Health Canada learned part of them were manufactured at a Maryland facility where U.S. officials uncovered manufacturing violations.

The U.S. has suggested it will share more AstraZeneca doses with Canada after loaning 1.5 million doses but it is not clear when that will happen.

Canada started getting Pfizer vaccines from the United States only this month. Despite Canada’s tightly woven commercial ties with the U.S., it has been getting Pfizer’s vaccines from Belgium until now because U.S. authorities had kept supplies made in the U.S. for domestic use.

The AstraZeneca vaccine, which is cheaper and easier to store than Pfizer or Moderna, is critical to global immunization campaigns. It is a pillar of the U.N.-backed program known as COVAX that aims to get vaccines to some of the world’s poorest countries.