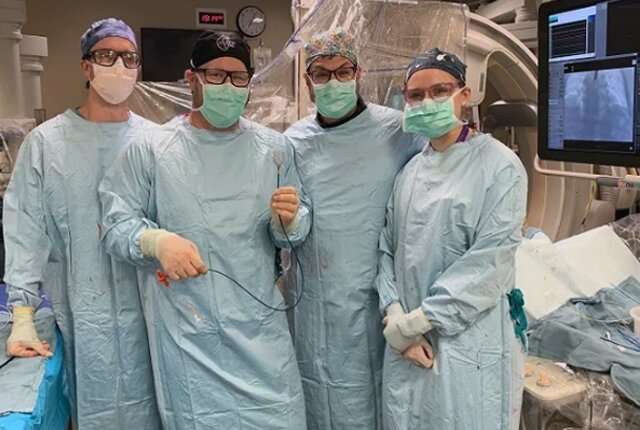 Interventional cardiologists at the UW Medicine Heart Institute in Seattle recently performed a first-in-human procedure, successfully employing a catheter-delivered device to retrieve a benign tumor from inside a patient’s heart.

The minimally invasive procedure on July 27 took just 30 minutes. The patient, Tim Holland, 54, of Granite Falls, Wash., avoided the open-heart surgery typically required for such a tumor removal, as well as the significantly longer recovery.

“I think we just saved Mr. Holland a lot of money and anxiety. He went home the same day. We didn’t need to put him on a heart-lung machine, and he didn’t spend five days in the hospital. And now he is not waiting another two years until his tricuspid valve suddenly stops working,” said Dr. James McCabe.

He and Dr. Zachary Steinberg collaborated on the case; both are clinical faculty at the University of Washington School of Medicine.

Benign tumors in the heart are not common. They are typically slow-growing, McCabe said, and patients often are advised to watch and wait until the lesion is of such size that it threatens the heart’s performance, at which point it is removed surgically.

Holland’s tumor, a fibromyxoma, was discovered via echocardiogram more than two years ago, when he was being evaluated for a liver transplant. After the transplant, he waited more than a year to fully regain his health and then met with McCabe to discuss options for getting the tumor removed. Although the lesion had not reached the point of causing a problem, Holland was concerned that it could break off from its stem and cause a stroke or other emergency.

“An ultrasound showed that it was moving back and forth with every pump of my heart. That scared me. I just didn’t want to take that chance,” Holland said.

In a happy coincidence, Steinberg, who knew of McCabe’s patient case, also knew a cardiologist in Pennsylvania who had founded a company that developed a catheter-delivered retrieval device. The device was approved by the U.S. Food and Drug Administration in May 2022. Steinberg contacted the colleague, Dr. Matthew Gillespie at Onocor Vascular, who facilitated getting the basket-shaped device to UW Medical Center.

The patient’s procedure entailed two steps: first using electrocautery to cut the 1.3 by 1.7 cm tumor away from the right atrium wall, and then grabbing and compressing the gristly tissue to remove it intact from the body.

“Increasingly we’re using electrocautery through catheters—electrified wires to sever structures in the heart. Only very advanced operators are doing this, and Jamie (McCabe) is among the doctors leading the field,” Steinberg said.

The retrieval instrument was designed for interventional cardiologists as a “rescue” device to grasp and remove implants such as stents that migrate from their original placement.

“Interventionalists have become very good at implanting things like mechanical heart valves, but it’s much more challenging to remove structures. Usually, surgeons have to go in and cut them out,” Steinberg said.

One successful procedure doesn’t prove the device’s safety in this tumor-removal role, McCabe acknowledged, but having a device that can grasp and remove small tumors from the heart might change patients’ appetites to follow convention and watch and wait.