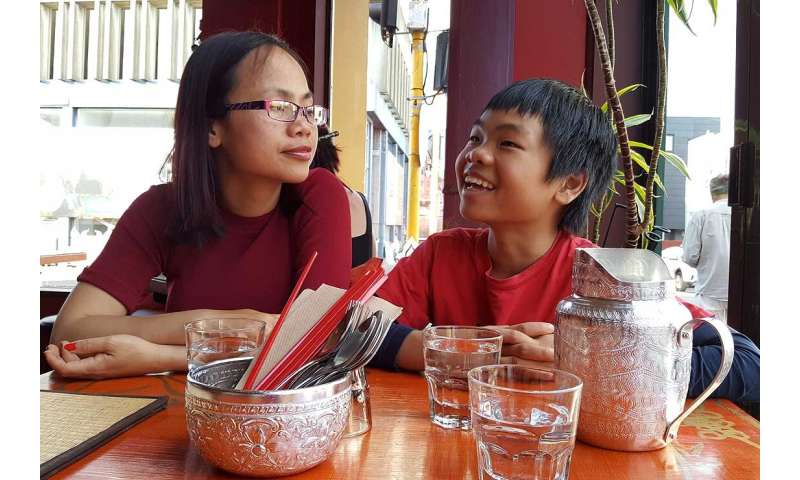 With the first-hand experience of raising a son with autism, a Massey University international Ph.D. student has called for a national communication strategy and action plan in her home country Vietnam, to change the way news media portray the condition.

Nguyễn Yến Khanh, who received a Massey Doctoral scholarship to pursue her Ph.D. study, recently conferred her thesis with the outcome of “pass without emendations.” The research discussed how the online news media in Vietnam framed and represented autism, using cultural political economy, corpus framing analysis and critical discourse analysis.

Feeling concerned about the developmental delays in her then 16 month old son Minh, Khanh visited a hospital in Ho Chi Minh City. The hospital psychologist confirmed her son had autistic traits, before suggesting that she should spend more time playing with Minh, as if increased interaction and socialisation would address his autistic issues.

The impact media coverage had on her motivated her to embark on this research. “In the early months after the autism diagnosis of my son, I could not tell what was right and what was wrong in the overwhelming whirlwind of information about autism causes and treatments on the internet. With what I read in the news, and the advice I received from a medical professional, I felt profoundly guilty, grieved and anxious,” Khanh said.

“I had been spending lots of time with my son at home, setting up play dates and taking him out every weekend. I wondered if I did more of that, would his autistic traits go away. So, I threw myself into research and training on autism intervention, then tried different things I learned, sometimes with established science, sometimes I could not wait for science to confirm.”

Driven by a need for her son to be understood and supported at school and in the community, Khanh has spent the past years advocating for a better awareness and the need of social facilitation for individuals with autism, leveraging on both social media and mainstream media. The insight gained in the community work was helpful to her in constructing the analysis and argument in her thesis. She tried to explain why Vietnamese online media portray people living with autism in the way they do, as well as the impact that news reports have on people’s lives.

“When analysing the data and writing this thesis, I often had to try to keep my computer screen away from my son. I did not want him to read the dehumanising content in the media samples I had collected and worked on. I explained some misperceptions about autism to him but I hope he will not look up Vietnamese media coverage about autism to read.”

Khanh recently successfully defended her thesis and all three examiners were fulsome in their praise, recommending it be nominated for inclusion on the Dean’s List. The New Zealand examiner noted the “analysis of the relationship between discursive structures and social reality is exceptional, contributing some innovative and thought-provoking ideas to the fields of media and communication studies”.

Khanh was delighted to read the examiners’ comments which recognised the hard work and effort that had been involved in completing her thesis.

“They reassured me about the quality of the thesis and the viva was an exciting event where I felt confident to share with the examiners my thoughts and processes in writing up the arguments.”

“Khanh’s study not only illuminates how Vietnamese media cover autism, but also offers rich insights into the relationship between journalism and the state in Vietnam. Both Elizabeth and myself were very proud supervisors and were delighted to see her produce such outstanding work.”

Khanh grew up in Vietnam, earned a Master in Advertising and Marketing at the University of Leeds in the United Kingdom with a British Chevening Scholarship. She loved New Zealand’s nature and decided to pursue her Ph.D. study here, with Massey University Doctoral Scholarship and Massey Business School Promising Student Assistance Bursary. On completing her Ph.D. just as the COVID-19 pandemic was spreading around the world, Khanh has returned to Vietnam to lecture at RMIT University. She is happy to be back to work but misses the regular lunch discussions in the Massey graduate lounge, as well as the potluck parties with fellow scholars.