When I was 11 years old, my family moved to the small town of Lima, Ohio from my birth country of Chile. As the oldest of five children coming into this new small town with no other Latinos, a lot of my experiences growing up were marked by the feeling of trying not to stick out, especially as an undocumented immigrant living in the shadows. As a child, I never really came out about my status. I didn’t know of any other undocumented people in my town.

Way before the Deferred Action for Childhood Arrivals (DACA) program, which protects undocumented immigrants who were brought to the U.S. as children from deportation, was enacted I remember going onto obscure online bulletin boards to learn more about my status.

There, I found other undocumented immigrants asking legal questions and expressing their fears, hesitations, and sense of alienation. That was my only community, all of these people in their lonely internet corners, just trying to find anonymous support.

When we came to the U.S., my parents worked two or three jobs all the time and there was really no explanation of what was going to happen, or how long we were going to be here.

But when you are the oldest of five, and you sense your parents working really hard to try to give you a better life, you just don’t ask a lot of questions. You take one day at a time and do the best you can.

Eventually that bubbled up into my own mental health issues with anxiety, which I’ve dealt with my entire life.

Even though I was fluent in English by the fifth grade, it was challenging trying to fit in and make sure I wouldn’t be on the receiving end of prejudice and stereotypes about people from our community, and I did my best to follow cultural rules.

I felt like a leper and a lot of my energy went into trying to create ways to make other people feel comfortable.

That included knowing what I would say if somebody were to ask me, “How did you get here?” and “How long did you live in Chile?”

When this happened, my body would automatically tense up because I knew that I had to respond in a way that wouldn’t give off red flags.

I felt like a leper and a lot of my energy went into trying to create ways to make other people feel comfortable. That meant hiding parts of who I was, pretending to like country music, losing my Chilean accent, and not really talking a lot about my background. These were micro-ways I tried to blend into this small white town where I felt very different, butcouldn’t show it.

There was also a lot of pressure to feed into the model minority concept.

My self-worth was predicated on my ability to succeed and tell other people that I was worthy through my productivity, success, and work.

Dealing with these feelings of anxiety had an added layer to it because in Latino families, mental health issues are often stigmatized and therapy is viewed as “para los loquitos” (for crazy people). There’s a lot of misinformation out there, along with the immigrant mentality that our parents had it so much worse and we shouldn’t complain or have these feelings of fear, stress, and anxiety.

As the oldest of five who saw all of the sacrifices my parents made, I knew that education was the key for me and that it was going to be part of what led me to future success. Still, I didn’t know how it was all going to pan out. 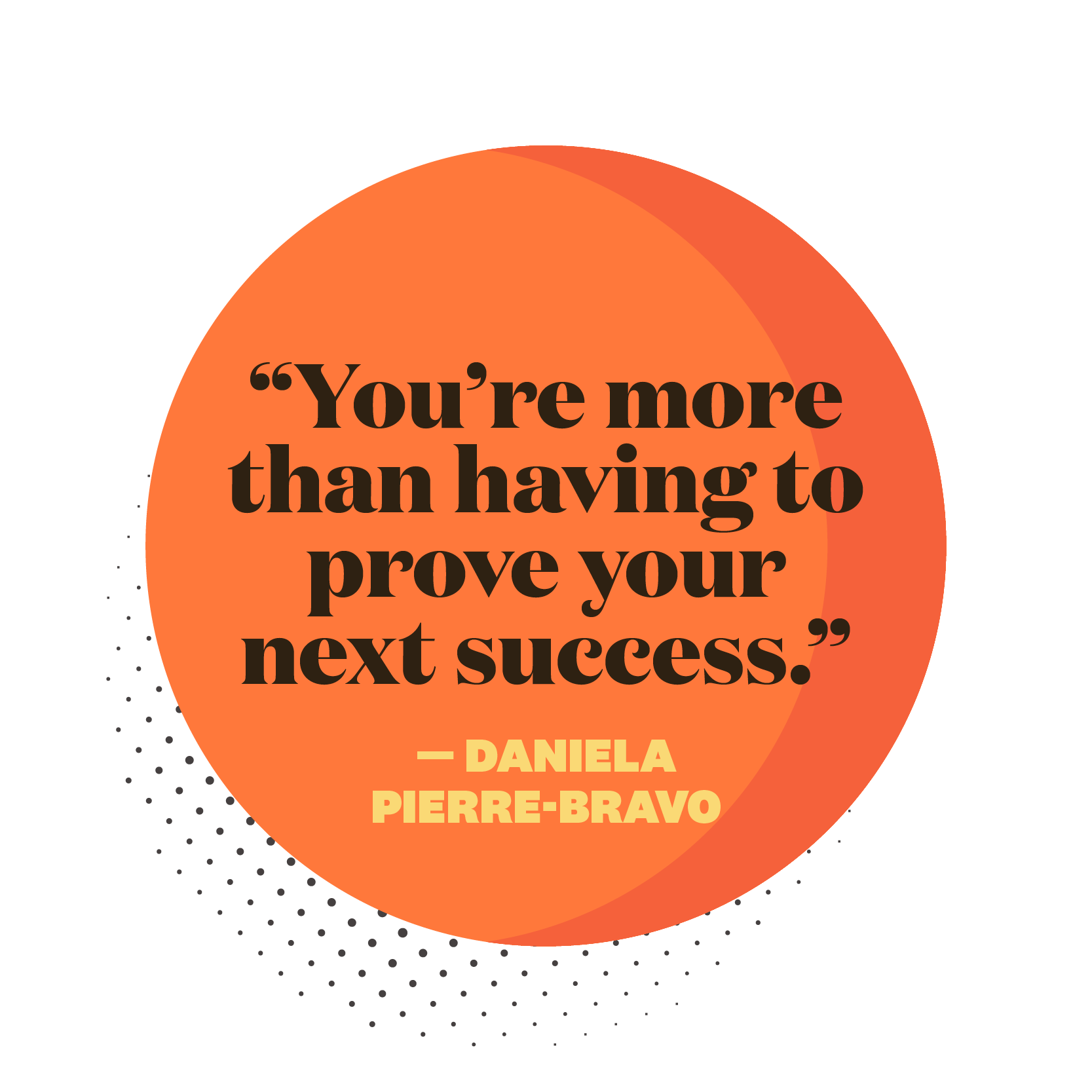 It was very hard for me to apply and even think about paying for college because my parents couldn’t afford it, I couldn’t apply for any loans, and I didn’t qualify for any government scholarships. So I spent summers working odd jobs to pay for college in cash and arrived at Miami University in Ohio with enough advanced placement credits to graduate in three years.

Even though I went to a pretty white college, it was a totally different environment because I felt like I had a clean slate. That was when I really started to realize that the Latina part of my identity was something that I didn’t want to hide and that I wanted it to be something I was proud of.

I realized that the duality of my identity was actually an asset and it didn’t need to hinder me.

I didn’t want to blend in anymore. If I could talk to my younger self, I would tell her it’s OK to see yourself as you are, that you’re enough the way you are, and that you’re more than having to prove your next success.

“Constantly judging, monitoring, and adjusting yourself is the plight of most women of color in the workplace.”

Although I had a great first year of college, I had to take a semester off after getting into a fender-bender. As an undocumented driver, I didn’t have a license or insurance. I told the other driver to name their price so we could settle it between us, and I gave them several thousand dollars worth of cash that I’d saved up for the following semester’s expenses.

That experience was really demoralizing and it felt like I was giving up my last bit of hope of finishing college. With no money to pay for it, I ended up missing that next semester to work six to seven 14-hour days a week—a mixture of odd jobs in restaurants, cleaning houses, babysitting, and working as a Mary Kay consultant.

But it also gave me the confidence to know that I could support myself and create opportunities amidst uncertainty. Confidence is a muscle and once you realize that it’s not something that you necessarily innately have, you can build it.

The summer before I graduated was also when I decided to pursue a career in television and media.

Growing up in a small town, I didn’t see the stories of Latinos, other marginalized communities, or women of color represented in the media, so I wanted have a hand at more equal representation, even though it was a lofty goal.

When I got a callback to interview for an unpaid internship at Bad Boy Entertainment, the marketing arm of Sean Combs’ brands, I got on an overnight bus from Ohio to New York and freshened up in the Port Authority Bus Station bathroom before going in. I ended up doing that internship, along with another one in ad sales at MTV Networks while also working a bunch of side jobs I found on Craigslist.

Later that summer, DACA came out, which changed my life. 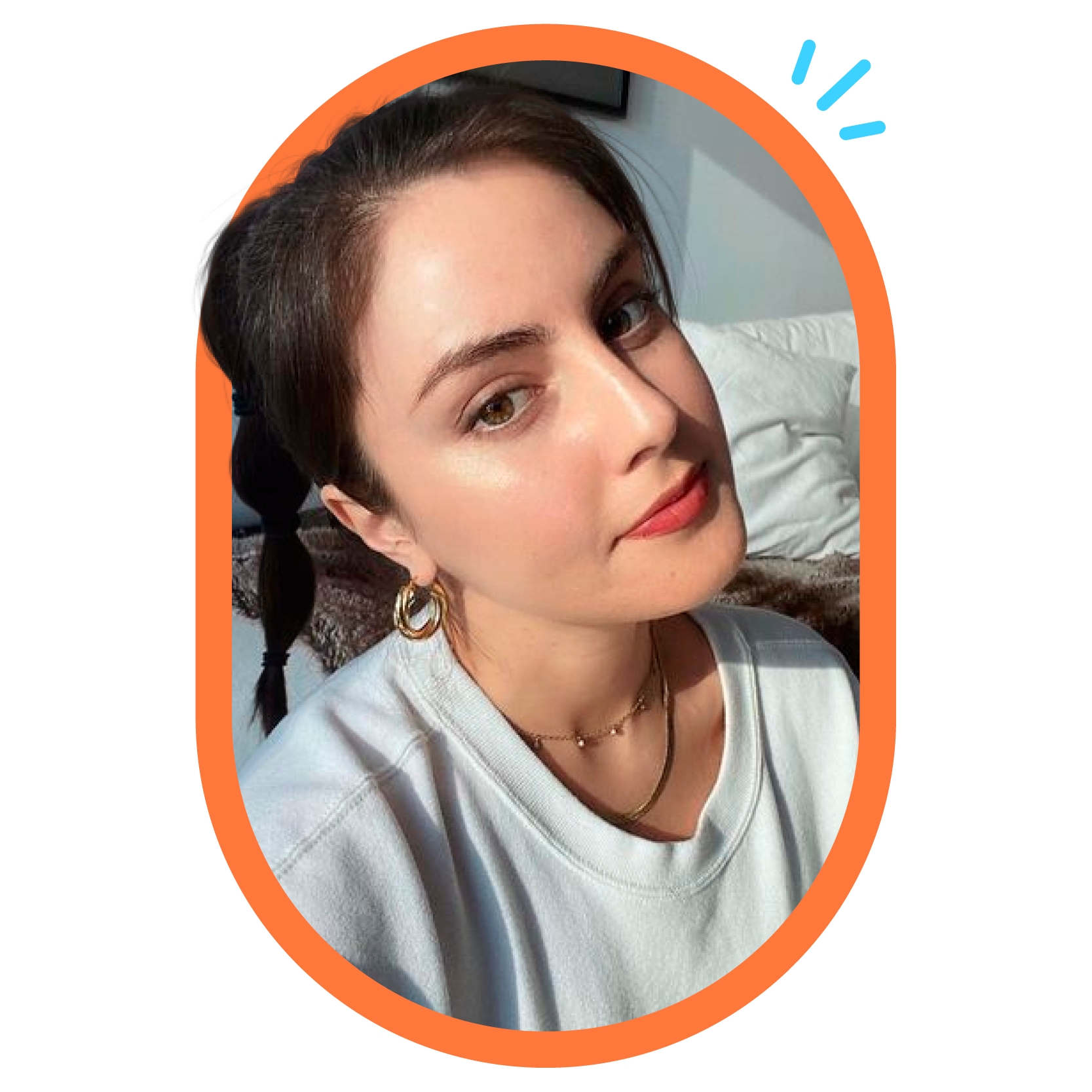 Fast-forward to the present, my current job as a producer at MSNBC’s Morning Joe involves pitching ideas and bringing more people of color and diverse voices to the table. My experiences led me to see that I needed to understand that it’s not about me or my story, it’s about what is lost when I decide not to use my voice, and when I decide not to use my power at work and feel confident in sharing my ideas.

I’m currently working on my next book, The Other, which will be out next spring and is all about helping women of color succeed in their careers.

Constantly judging, monitoring, and adjusting yourself is the plight of most women of color in the workplace. I don’t think we can have a conversation about advocating for yourself at work, and knowing and showing other people your value, if you don’t reckon with your own identity first and see yourself through your own eyes versus the eyes of someone else.

I’ve always felt like I’ve been in fight-or-flight mode when it comes to my anxiety.

I think it really started affecting me in a more negative way once I was in the workplace because all my life I’ve had these narratives about myself as the “other.”

My need to constantly prove that I belonged led me to wring myself dry, doing things I wasn’t getting paid for or going to events that would suck me of energy. I would have panic attacks out of the blue.

I think this happens to a lot of women in and out of the workplace; we put our heads down, say yes to everything, and volunteer for everything. We’re the ones who stay the latest, and the ones who raise our hands for everything without thinking about it.

This past year especially, I’ve really allowed myself to slow down. I’ve worked on knowing my own self-worth, and recognizing that I’m more than my accomplishments. Those things and that way of operating have followed people like me all our lives, and it doesn’t benefit you in the workplace.

As an adult, I’ve had to really work via therapy on learning to say no and how to exert my boundaries on things. I’ve also started practicing meditation, movement, and breathwork.

I’ve had to consciously tell myself, “I am more than a DACA recipient,” because that holds a lot of weight for us.

We have to fight for our livelihood, and prove ourselves every time DACA is in the news.

I still deal with anxiety about the state of the DACA program. Dreamers are constantly in limbo and still have to reapply every few years. There’s no permanent solution, there’s no path to legalization, and it could be dismantled at any moment.

Seventy-four percent of Americans support legalizing the status of those brought to the U.S. as children, and that includes about 54 percent of Republicans, according to recent statistics. It’s a fact that immigrants contribute to society and the economy and it’s exhausting to keep repeating it and trying to prove that we deserve to be here. I know there are still people who don’t support DACA, but a part of me feels like there’s no more explaining left to do.

With the current support of the President and Vice President, there’s a lot of positive movement for a path to legalization to happen this year. I am optimistic about President Biden’s calls to find a pathway to citizenship for Dreamers. It’s encouraging to hear the White House’s backing, but, of course, that only goes so far unless there’s real legislation attached to it that holds weight.

If there are other Dreamers out there also dealing with these same mental health challenges I have, I would encourage them to find ways to make their mental health a priority. I had the privilege of finding a community of DACA recipients when I came out as undocumented after writing my first book (Earn It! Know Your Value and Grow Your Career, in Your 20s and Beyond, with Mika Brzezinski) because, for so many years, I was in the shadows and had no idea this community existed.

And damn, we are resilient.