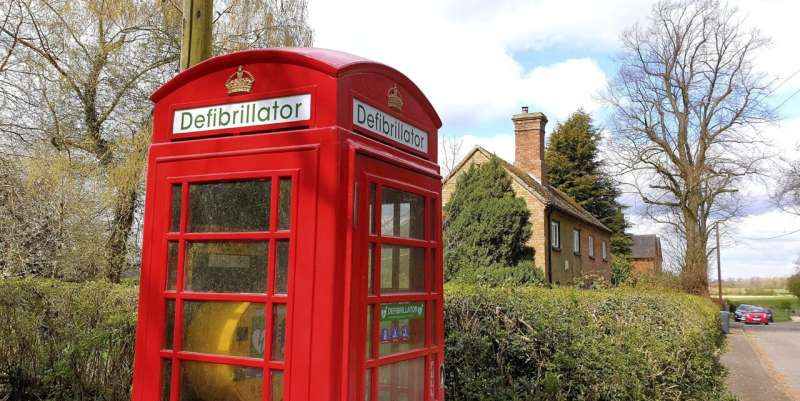 CLAIM: British telephone booths are being retrofitted with defibrillators because the COVID-19 vaccines are causing more cardiac arrests.

AP’S ASSESSMENT: False. A movement to install defibrillators in telephone kiosks across the U.K. is more than a decade old and didn’t result from the coronavirus or vaccines, according to Community Heartbeat Trust, the charity that originated the idea. One of the lifesaving devices featured in many recent posts was installed in the U.K. in 2017, years before the pandemic. Cardiologists say there’s no evidence to suggest COVID-19 vaccines are causing an increased rate of cardiac arrests.

THE FACTS: A video of a telephone booth-turned-defibrillator in the British countryside amassed millions of views on Twitter this week, alongside suggestions that it symbolized a new movement to mitigate vaccine-related deaths by installing the tool in public spaces.

The video shows one of the U.K.’s iconic red phone booths nestled beside a stone wall and in front of a stone cottage, with a yellow defibrillator visible inside.

“A British phone booth that’s been converted into a defibrillator. I wonder why the government is installing defibrillators on the streets now,” read one tweet, adding a syringe emoji to suggest the move was linked to vaccines.

“The new normal,” wrote a Twitter user that has spread numerous debunked claims about vaccines causing medical emergencies and deaths.

However, the defibrillator shown in the video is not new as the posts imply, nor is the effort to install the devices in telephone booths a result of the pandemic, according to the nonprofit that started it.

“I can categorically state that these are NOT appearing as a result of COVID,” Community Heartbeat Trust National Secretary Martin Fagan wrote in an email to The Associated Press, calling the claims “misinformation.”

A cabinet number on the device that is visible in the video reveals it is in Corfe Castle, a village in Dorset, England. It was installed in June 2017 after a fundraising campaign by the wife of a man who died cycling, Fagan wrote. The man led a specialized food company, and to raise funds, the company sold a special yogurt, Fagan said.

“In total, 17 locations were installed across the UK in his memory, at locations that meant something to him,” Fagan wrote. “It is a great story and case history.”

The Corfe Castle defibrillator can be seen in historical Google Street View imagery from July 2018.

The device is one of around a thousand that Community Heartbeat Trust has installed in telephone booths across the U.K. in a movement that started in 2009, Fagan said. Other organizations have followed the charity’s lead, repurposing outdated telephone boxes to house the devices, which significantly improves chances of survival when used after sudden cardiac arrest.

News reports dating back a decade back up Fagan’s comments, showing telephone kiosks have long been converted into defibrillators across the U.K. and Ireland as a response to sudden cardiac arrests in the population.

Cardiologists told the AP that having the devices available in public spaces has greatly improved survival rates in people who experience a cardiac emergency.

Despite widespread online claims that COVID-19 vaccines are causing cardiac arrests, cardiologists say there’s no evidence of a link between the two, among athletes or in the general population.

“We have not seen an increase in sudden cardiac arrest as it relates to the vaccine,” said Dr. Matthew Martinez, director of sports cardiology at Atlantic Health System in Morristown Medical Center.

Monitoring systems that track people who have been vaccinated would have identified a link between the vaccine and cardiac arrest if it existed, and they haven’t, said Dr. Paul Offit, director of the Vaccine Education Center at Children’s Hospital of Philadelphia.

Studies examining rare cases of myocarditis and pericarditis—inflammation of the heart muscle or its surrounding tissues that is typically mild—after vaccination haven’t found any increased risk of death or cardiac arrest among the those who’ve received COVID-19 shots, according to the British Heart Foundation.

© 2023 The Associated Press. All rights reserved. This material may not be published, broadcast, rewritten or redistributed without permission.