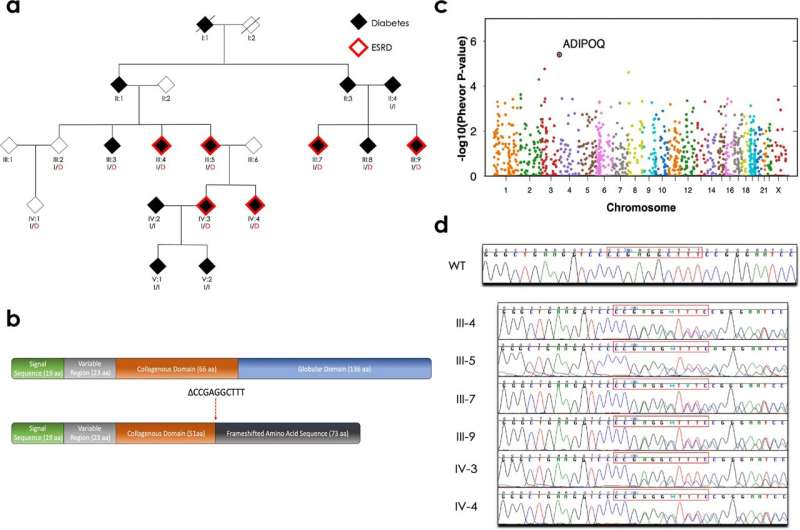 A rare genetic mutation could help explain why some families are more susceptible to diabetes and kidney failure, according to a new study led by University of Utah Health scientists. They say the discovery, made within multiple generations of a single family, could ultimately lead to better treatments for these conditions among a range of patients, no matter if they inherited the mutation or not.

“In the past, we’ve seen sporadic cases here and there, but this is the first family to demonstrate that this mutation can be inherited,” says Marcus Pezzolesi, Ph.D., M.P.H., the study’s corresponding author and a U of U Health associate professor of Internal Medicine in the Division of Nephrology. “What’s exciting is that there are therapies being developed that could improve this condition not just within this family but more broadly among a vast spectrum of patients with diabetes who are at risk of kidney disease.”

The study, conducted in collaboration with Joslin Diabetes Center and the Harvard Medical School in Boston, appears in npj Genomic Medicine.

Scientists have long known that people who are overweight or obese produce less adiponectin, a hormone that promotes insulin sensitivity, inhibits cell death, and decreases inflammation. As a result, these individuals are more prone to insulin resistance, type 2 diabetes, kidney disease, and other life-threatening conditions.

To determine if there might be a genetic cause for diabetic kidney disease, Pezzolesi and colleagues analyzed DNA samples from 14 members of a single family collected at the Joslin Diabetes Center. In all, six of the family members across three generations had diabetes and end-stage kidney disease.

Digging deeper, the researchers used whole genome sequencing to isolate a defect in a gene called ADIPOQ, which encodes the adiponectin protein. The mutation shortens the gene, disrupting its ability to produce the hormone, which breaks down ceramides, a fatty substance similar to cholesterol. As a result, people with the mutation have higher levels of ceramides. Previous studies suggest that ceramides are a driving force behind the onset of type 2 diabetes and may contribute to diabetic kidney disease.

In laboratory studies of human embryonic kidney cells, the researchers found that just a single copy of this mutation was capable of decreasing adiponectin production. The researchers determined that this mutation occurs in about one in every 57,000 people.

Overall, carriers of the genetic mutation had about 85% less adiponectin and 30% higher levels of ceramides circulating in their blood relative to non-carriers within this same family, who were used as a control group.

“What’s most exciting for me is that this finding allows us to confirm decades of research in animals,” says William Holland, Ph.D., a co-corresponding author of the study and a U of U Health associate professor of Nutrition and Integrative Physiology. “The biological effects of adiponectin in regulating insulin sensitivity, glucose tolerance, and ceramide levels is well established in mice, and the current study shows that a loss of adiponectin impairs metabolic health in humans.”