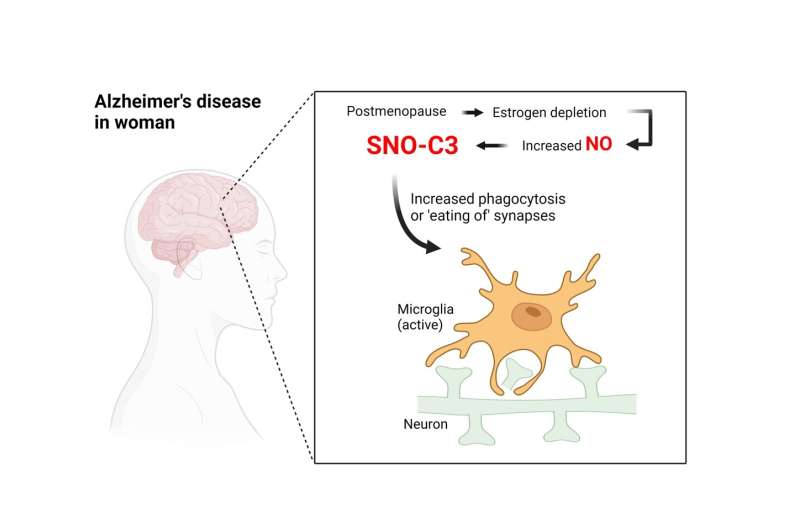 Scientists at Scripps Research and Massachusetts Institute of Technology (MIT) have found a clue to the molecular cause of Alzheimer’s—a clue that may also explain why women are at greater risk for the disease.

In the study, reported on December 14, 2022, in Science Advances, the researchers found that a particularly harmful, chemically modified form of an inflammatory immune protein called complement C3 was present at much higher levels in the brains of women who had died with the disease, compared to men who had died with the disease. They also showed that estrogen—which drops in production during menopause—normally protects against the creation of this form of complement C3.

“Our new findings suggest that chemical modification of a component of the complement system helps drive Alzheimer’s, and may explain, at least in part, why the disease predominantly affects women,” says study senior author Stuart Lipton, MD, Ph.D., professor and Step Family Foundation Endowed Chair in the Department of Molecular Medicine at Scripps Research and a clinical neurologist in La Jolla, California.

The study was a collaboration with a team led by Steven Tannenbaum, Ph.D., Post Tenure Underwood-Prescott Professor of Biological Engineering, Chemistry and Toxicology at MIT.

Alzheimer’s, the most common form of dementia that occurs with aging, currently afflicts about six million people in the U.S. alone. It is always fatal, usually within a decade of onset, and there is no approved treatment that can halt the disease process, let alone reverse it. The shortcomings of treatments reflect the fact that scientists have never fully understood how Alzheimer’s develops. Scientists also don’t know fully why women account for nearly two-thirds of cases.

Lipton’s lab studies biochemical and molecular events that may underlie neurodegenerative diseases, including the chemical reaction that forms a modified type of complement C3—a process called protein S-nitrosylation. Lipton and his colleagues previously discovered this chemical reaction, which happens when a nitric oxide (NO)-related molecule binds tightly to a sulfur atom (S) on a particular amino acid building-block of proteins to form a modified “SNO-protein”. Protein modifications by small clusters of atoms such as NO are common in cells and typically activate or deactivate a target protein’s functions. For technical reasons, S-nitrosylation has been more difficult to study than other protein modifications, but Lipton suspects that “SNO-storms” of these proteins could be a key contributor to Alzheimer’s and other neurodegenerative disorders.

The complement system is an evolutionarily older part of the human immune system. It consists of a family of proteins, including C3, that can activate one another to drive inflammation in what is called the “complement cascade.” Scientists have known for more than 30 years that Alzheimer’s brains have higher levels of complement proteins and other markers of inflammation, compared to neurologically normal brains. More recent research has shown specifically that complement proteins can trigger brain-resident immune cells called microglia to destroy synapses—the connection points through which neurons send signals to one another. Many researchers now suspect that this synapse-destroying mechanism at least partly underlies the Alzheimer’s disease process, and loss of synapses has been demonstrated to be a significant correlate of cognitive decline in Alzheimer’s brains.

Why would SNO-C3 be more common in female brains with Alzheimer’s? There has long been evidence that the female hormone estrogen can have brain-protective effects under some conditions; thus, the researchers hypothesized that estrogen specifically protects women’s brains from C3 S-nitrosylation—and this protection is lost when estrogen levels fall sharply with menopause. Experiments with cultured human brain cells supported this hypothesis, revealing that SNO-C3 increases as estrogen (β-estradiol) levels fall, due to the activation of an enzyme that makes NO in brain cells. This increase in SNO-C3 activates microglial destruction of synapses.

“Why women are more likely to get Alzheimer’s has long been a mystery, but I think our results represent an important piece of the puzzle that mechanistically explains the increased vulnerability of women as they age,” Lipton says.

He and his colleagues now hope to conduct further experiments with de-nitrosylating compounds—which remove the SNO modification—to see if they can reduce pathology in animal models of Alzheimer’s and eventually in humans.