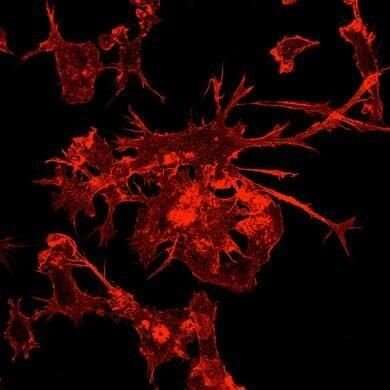 Researchers at the Francis Crick Institute have uncovered an important process in how our immune system detects signs of disease and activates a protective response. This understanding could improve efforts to find new and effective immunotherapy treatments for diseases like cancer.

In their study, published in Nature Immunology, the scientists found a mechanism by which specific immune cells, called dendritic cells, relay signals of disease to surrounding T-cells.

If a cell becomes cancerous or infected with a virus, the proteins inside it change to reflect this. Dendritic cells need to present these proteins to T cells to initiate an immune response. But how can they do this if the proteins are inside another cell? It turns out dendritic cells that come across a diseased cell that is dying from infection or cancer engulf bits of the dead cell and hold those bits inside themselves, within pockets called phagosomes.

By studying this process in mouse immune cells, the researchers found that in order to present the dead cell proteins to T-cells, invoking a response, the phagosome bursts, setting the proteins free within the inside of the dendritic cell. There, the proteins get chopped into small fragments that travel to the dendritic cell surface and are presented to the T-cells. The researchers found that key to this mechanism is a receptor called DNGR-1.

Caetano Reis e Sousa, author and group leader of the Immunobiology Laboratory at the Crick says: “For decades there has been a question over how proteins within phagosomes escape in order to be chopped up and presented at the dendritic cell surface. We’ve been working on this for many years so it’s exciting to finally have evidence of a specific receptor which signals for phagosomes to burst.

“A better understanding of this process, which is fundamental to our immune system, could lead to new ways to exploit our body’s natural defenses against infection and cancer.”