Paediatricians and dentists have called for the Government to impose mandatory national limits in how much salt and sugar is in baby food.

Leading medics have said it is a ‘national disgrace’ that infants face a ‘nutritional lucky-dip’ with some products containing more sugar than a Coca Cola soft drink.

They added some baby foods even contain up two-thirds of an adults recommended daily sugars, let alone a young child’s, placing the health of the next generation at risk. 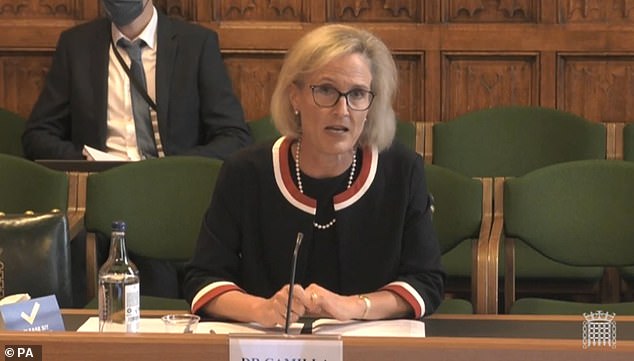 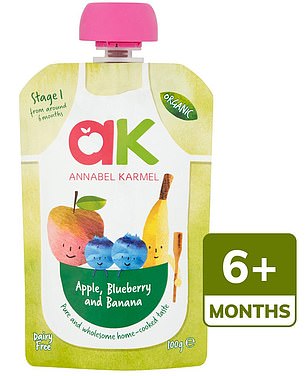 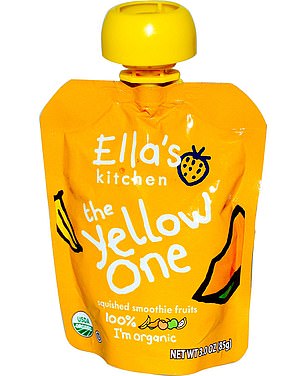 The amount of sugar a person should eat in a day depends on how old they are.

Children aged four to six years old should be limited to a maximum of 19g per day.

Seven to 10-year-olds should have no more than 24g, and children aged 11 and over should have 30g or less.

Meanwhile the NHS recommends adults have no more than 30g of free sugars a day.

Popular snacks contain a surprising amount of sugar and even a single can of Coca Cola (35g of sugar) or one Mars bar (33g) contains more than the maximum amount of sugar a child should have over a whole day.

A bowl of Frosties contains 24g of sugar, meaning a 10-year-old who has Frosties for breakfast has probably reached their limit for the day before they even leave the house.

Children who eat too much sugar risk damaging their teeth, putting on fat and becoming overweight, and getting type 2 diabetes which increases the risk of heart disease and cancer.

It comes with childhood obesity on the rise in Britain, with one in three youngsters too fat by the time they leave primary school.

The UK’s Royal College of Paediatrics and Child Health (RCPCH) which issued the call to action, said the Government had failed to act on draft commercial baby food and drink guidelines it proposed in 2020.

This, the college argued, had left the industry a Wild West, with no limits on the amount of salt and sugar that could be in products on supermarket shelves.

‘It’s a national disgrace that there is currently zero guidance on the salt and sugar levels in products aimed at infants, who are in a critical stage of their development,’ she said.

She added that parents were not at fault with companies taken in by effective and misleading marketing ploys.

‘In my own practice, I see parents of very small and vulnerable babies buy baby food pouches and pots with the assumption that they are giving their children the best start they can,’ she said.

‘The marketing strategies used on these parents are highly effective, with buzzwords such as ‘all organic’, ‘natural sugars’ and ‘nutritionally approved’. At best this disingenuous, at worst dangerous.

‘Nutritional education, alongside government leadership and regulations are desperately needed. The future wellbeing of our children is too important.’

The British Dental Association (BDA), which earlier this year, published analysis showing many baby food pouches can contain more sugar by volume than Coca Cola, have also called for action. 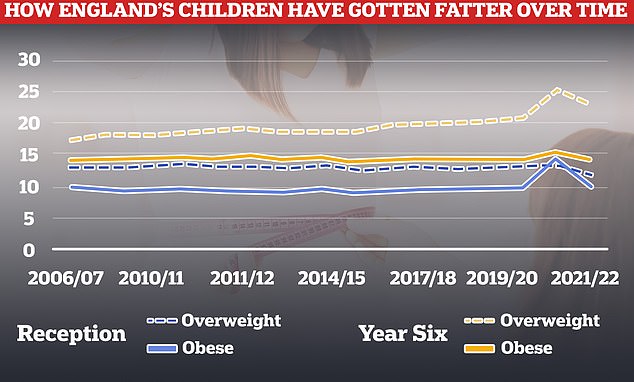 Rates of obesity and being overweight have fallen this year after spiking during the Covid pandemic, but are still higher than pre-lockdown 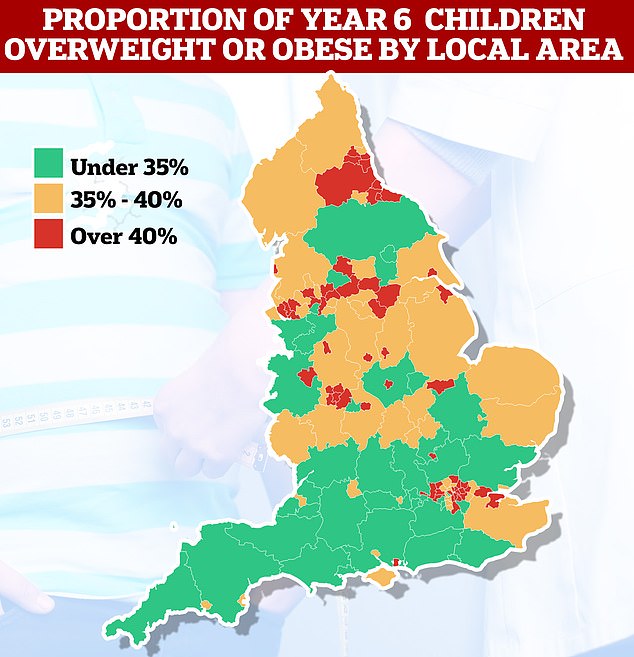 Among Year 6 pupils, national obesity prevalence dropped from 25.5 per cent in 2020/21 to 23.4 per cent. But in some parts of the country nearly half of all children this age were either obese or overweight. The London Borough of Barking and Dagenham topped the list with a whopping 49 per cent of Year 6 pupils too fat. This was followed by Sandwell in the West Midlands just outside Birmingham at 48.9 per cent, and the city of Wolverhampton at 48.6 per cent 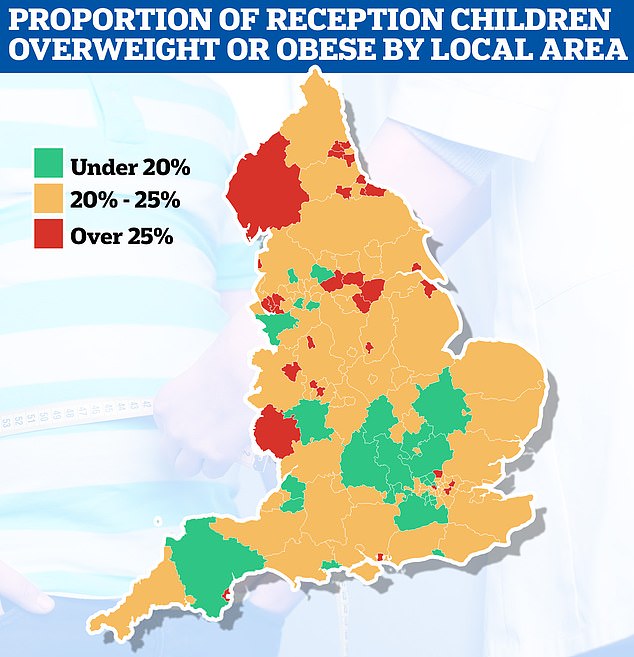 Nationally 10.1 per cent of Reception-aged children were obese during 2021/22. But rates were much higher in some parts of the country. The London borough of Westminster weighed in with one in four (28.9 per cent) of its four-and-five-year-old-children being either obese or overweight. This was followed by the town of St Helens in Merseyside and Kingston upon Hull in Yorkshire which came joint second with 28.7 per cent of their children too fat 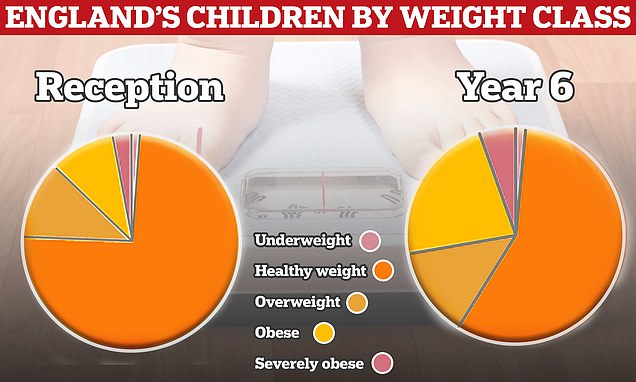 ‘Tooth decay is the number one reason for hospital admissions among young children,’ he said.

‘Yet Ministers are letting parents be duped into buying foods that can hook their kids to sugar from infancy.

Some ex-senior Tories have also joined the call for the Government to take greater action on childhood obesity.

Mr Osborne also said more needs to be done to tackle the causes of obesity, calling the lack of progress ‘disappointing’.

Speaking to BBC Radio 4’s Today programme, the former Tory frontbencher said: ‘We wanted to ban the advertising of junk food or overly sugary food for programmes that kids might see.’

‘That still has not been implemented.

‘To my mind, that’s very disappointing.’

He added that the Conservatives ‘should not be afraid of sensible use of government to improve people’s health’ as it will reduce dependency on public services like the NHS in the long-term.

‘This is absolutely fundamental. I honestly don’t think there’s anything more important for the future of the country but to make sure we deal with this – early years education and wellbeing,’ he said.

‘And particularly today when the pressures on families are enormous, and when there are levels of poverty that we really haven’t seen in the country for a long period of time.

‘For the sums of money you’re going to spend on this early years, if you really have the will to do it, I promise you having been in government, you could find the money necessary to do this.’

The Department of Health and Social Care was contacted for comment.

They found about a quarter of the products including middle-class favourites Annabel Karmel and Ella’s Kitchen, have many items in their ranges more sugary than Coca Cola when measured by volume.

Some of the products even contained up to two thirds of an adult’s recommended 30g daily allowance of sugar.

At the time, a spokesperson for Annabel Karmel said its pouches’ ‘limited sugar content comes from naturally occurring sugars found in the fruits used’.

And a spokesperson for Ella’s Kitchen said the company had been reducing the proportion of higher sugar fruits like bananas in its recipes as well as introducing lower sugar fruits and 100 per cent vegetable pouches.

NHS guidelines state there is no guideline for the amount of sugar children under the age of four should consume but it’s recommended to avoid as much sugar as possible.

Baby food was left out of a Government challenge to the food industry in 2016 to reduce the amount of sugar contained in certain foods by 20 per cent.

A high amount of sugar consumption is considered one of the factors that contributes to childhood obesity.

Being too fat can bring a host of health problems like type 2 diabetes, asthma and high blood pressure, all issues the RCPCH say are on the rise in children.

Too much sugar also impacts tooth decay, with rotting teeth now the most common reason for hospital admissions in children aged five to nine over the past four years.

The latest data on childhood obesity for England found that nationally, one in 10 youngsters are now classified obese by the time they start Reception.

But rates are much higher in some parts of the country, with one in four 28.9 per cent of four-and-five-year-old-children in Westminster overweight.

The risk of childhood obesity has been linked to deprivation, with children in the poorer areas twice as likely to be too fat compared to youngsters from more affluent parts of the country.

In other health news…

Table for one? Ladies who lunch eat more calories than those dining solo, study finds