New research from the University of Sydney, UNSW and Harvard, released on Thursday, studied more than 3500 people over 12 years and found those with a low level of drinking had a lower risk of depression by age 50 than all other drinking groups, including people who did not drink alcohol. 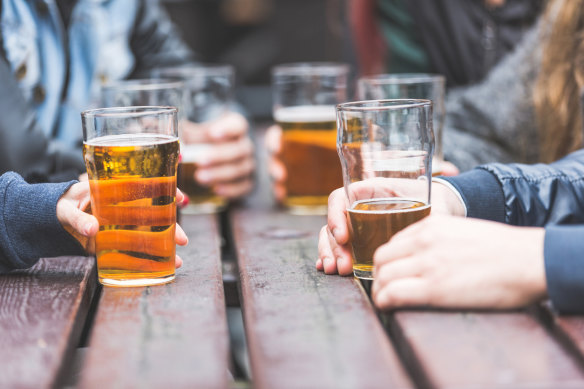 Published in The American Journal of Psychiatry, researchers examined long-term data from the US to “compare the effects of consistent abstinence and occasional, moderate, and above-guideline alcohol consumption throughout early to middle adulthood on depression at age 50.”

Rachel Visontay, the first author of the paper and PhD student at the Matilda Centre for Research in Mental Health and Substance Use at the University of Sydney, says while the study uses research from the US, its findings are still relevant to the Australian context.

Visontay does point out, however, that the study defined moderate drinking according to US drinking guidelines – up to about 10 Australian standard drinks per week for women, and 20 for men. At home, our current guidelines recommend no more than 10 per week for both sexes.

“The drinking culture and consumption of alcohol per capita are similar, although we have higher rates of binge-drinking and fewer non-drinkers,” she says.

Cases of depression rose by around 50 per cent globally between 1990 and 2017, and the disease constitutes the sixth most burdensome condition in the world. At home, two in five Australians aged 16-85 have experienced a mental disorder at some stage in their life.

The study employed a sophisticated method of analysis, called marginal structural model, or MSM, that allowed researchers to control for lifestyle and historical factors previous studies on alcohol and depression weren’t able to take into account.

“Historically, it’s been really hard to disentangle association and causation when it comes to alcohol and mental illness, or health in general,” says Visontay, given the complex relationships between alcohol and health and other background factors.

“MSMs are really good at separating factors out. This method allowed us to control for multiple factors, such as whether non-drinkers had always been non-drinkers or whether they were what we call ‘sick quitters’ – meaning they used to be heavier drinkers and then cut down.”

Visontay says there are several theories for why small amounts of alcohol may have benefits for depression, one being that alcohol helps with social interaction, which researchers know is important for mental health. She also says there is emerging research on the effects of alcohol to provide mood-boosting benefits to the brain. However, most of this is short-term and there’s still work that needs to be done on the topic.

Professor Emmanuel Kuntsche, director of the Centre for Alcohol Policy Research at La Trobe University, warns of the need to be cautious about interpreting the findings. “People who don’t have a lot of social interactions often have less opportunities to consume. It’s not alcohol consumption per se, it’s the social activity that makes me feel less lonely and less depressed.”

He says the language used in the paper that frames low to moderate drinking as “protective” or “beneficial” can be dangerous. “A low dosage of alcohol is not harmful, but is it beneficial?” he asks.

“Even if the benefits of alcohol for depression are true, you have to view this in light of cancer and injuries,” for which there is a positive, linear relationship, says Kuntsche. A report from the WHO published in January this year showed there is no safe level of alcohol use for health.

Published in The Lancet, researchers found that “Ethanol (alcohol) causes cancer through biological mechanisms as the compound breaks down in the body, which means that any beverage containing alcohol, regardless of its price and quality, poses a risk of developing cancer.”

He adds that moderate consumption always bears the risk of increasing consumption. Alcohol’s mood-changing properties mean that it can be hard to stop at just a few drinks. He points to a study he conducted, in which only one-third of participants were able to stick to their intention of only having two or three drinks.

Visontay is conscious of the ways in which this data could be misinterpreted. “I want to emphasise that this is not grounds for a drinking free for all,” she says, adding that it’s important to do more research to examine whether social interaction is more important to happiness than the alcohol itself. “If it is the social interaction, then that’s a target we can work on. Alcohol may be the key to the door, but there are many other keys.”