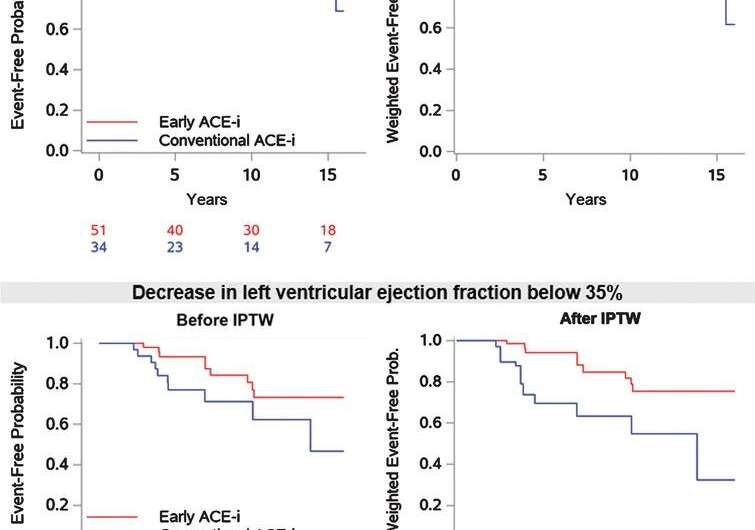 There is no consensus on when to introduce cardioprotective treatment in patients with Becker muscular dystrophy (BMD), and practice varies widely. A new study published in the Journal of Neuromuscular Diseases concludes that starting treatment with an ACE inhibitor as soon as cardiac function drops below the lower limit of the normal range reduces the risk of patients developing severe cardiomyopathy and heart failure, which are common outcomes in BMD.

The prevention of endstage heart failure, one of the most common causes of death in patients with BMD, is central in their management. BMD is a form of muscular dystrophy related to Duchenne muscular dystrophy (DMD) in that both result from a mutation in the dystrophin gene, but with a milder course in the case of BMD. The latest practice guidelines from the American College of Cardiology/American Heart Association recommend prescribing an angiotensin-converting enzyme inhibitor (ACE-i) for patients with non-ischemic cardiomyopathy when left ventricular ejection fraction (LVEF) falls below 40%. There is, however, no consensus on when to start treatment in patients with BMD.

“While there is extensive literature showing a beneficial effect of cardioprotective treatments such as ACE inhibitors in DMD, thus far there was only limited evidence of a similar effect in BMD,” explained lead investigator Karim Wahbi, MD, Ph.D., AP-HP, Myology Institute; Cochin Hospital; Université de Paris; and Inserm, UMRS, Paris, France. “As a result, there is no consensus to date among experts in the field of neuromuscular cardiomyopathies. And there remains a great variability regarding the use of ACE inhibitors in BMD from one country to another and from one center to another. Should this treatment be initiated when cardiac function is normal like in DMD? Or when overt cardiac failure is present (left ventricular ejection below 40%) as recommended in the general population? Or somewhere in between? We wanted to fill that gap.”

The investigators sought to determine if starting treatment with an ACE inhibitor earlier than recommended by practice guidelines issued by professional societies improves the long-term cardiac outcomes of patients with BMD. They analyzed data retrospectively from 183 patients entered in a French multicenter registry of BMD between January 1990 and April 2019 using a complex statistical analysis called propensity score analysis. They found that the long-term cardiac outcome of patients with BMD was significantly better when treatment with an ACE inhibitor was introduced earlier than recommended in the current practice guidelines.

The magnitude of benefit conferred by ACE inhibitors in this study of patients with BMD is similar to that observed in an earlier randomized study of patients with DMD, adding support to their high efficacy in the prevention of myocardial dysfunction, especially when introduced early in the course of the disease.