It’s not so long ago that dahlias were considered irretrievably vulgar. That brazen showiness was too loud for English country garden styles that preferred a floatier look. There’s nothing floaty about a dahlia.

Even the dahlias that are coloured an inoffensive beige, like the darling dahlia of the past few years, “Cafe au Lait”, would never pass for floaty. Cafe au Lait is a tall leggy plant with flowers the size of saucers. It’s an up-the-back-of-the-border specialist, staked or otherwise held upright by other plants or a trellis. 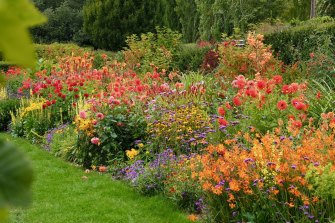 The English plantswoman Gertrude Jekyll noted back in 1899 that “the dahlia’s first duty in life is to flaunt and to swagger and to carry gorgeous blooms, well above its leaves and on no account to hang its head.” Cafe au Lait is a fail on the Jekyll score, too often beaten down by the weather and unable to hold its head up. “Breannon” is a similar tone of pale pink merging into apricot via soft cream and while it doesn’t have the looseness of Cafe au Lait’s petal arrangement, it makes up for that with a stronger neck.

Breannon was the indisputable star of the borders in front of the old stone cottage at Diggers’ Garden of St Erth in the Central Highlands of Victoria last March. In the morning sun hundreds of blooms of Breannon stood tall behind a fuzz of cerise and apricot agastache spires and long waving tendrils of salvia.

Elsewhere in the garden a black-foliaged, low-growing “Yellow Hammer” was showing off with pineapple lilies, demonstrating that as long as floaty is not the aim, there is a dahlia for every sunny spot in the garden. The smaller growing dahlias are even suitable for a pot.

Nurseries will be sending out dahlia tubers this month. Plant immediately for flowers in December, but to get the longest, least-heat-damaged flowering period allow them to skip the horror days of mid-summer by planting out in November. That way flowers will start in February and continue into winter.

They’ll need a sunny spot, and soil improved with homemade compost and old manure. If they are tall-growers provide the stake or trellis at planting, rather than risk piercing the tuber when the plant starts flopping and screaming for help. For a more compact plant and better flower display, pick out the growing tip of the plant as soon as it has four or five sets of leaves. Likewise when cutting the flowers to bring indoors, take at least two sets of leaves to trigger more growth. Keep the plant deadheaded too for continual flowering.

Diggers offers 10 dahlia choices, including Breannon and Yellow Hammer. For a bigger selection try Frogmore Gardens, the wonderful garden created by Jack Marshall and Zena Bethel not far from Garden of St Erth. The challenge will be choosing from the 52 dahlias in Frogmore’s online catalogue.