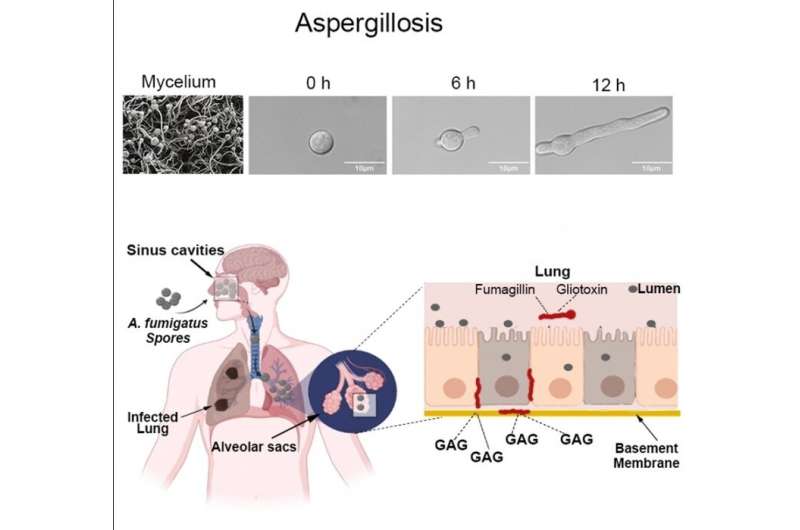 Every day we inhale thousands of potentially pathogenic fungal spores, but our immune system simply eliminates them. However, in people with compromised immunity, such as transplant and cancer patients, as well as hospitalized patients in intensive care, the interaction between pathogen and host may be quite different.

Fungal infections that emerged during the COVID-19 pandemic, reinforcing the action of SARS-CoV-2 around the world, are a case in point. Mortality reached 80% among severe COVID-19 patients infected with the fungus Aspergillus fumigatus, for example.

A review article by an international group of researchers analyzing SARS-CoV-2/fungus co-infections during the pandemic is published in Nature Microbiology, with warnings relevant to the present and to future pandemics.

“The key issue with fungi is that they’re an extremely neglected public health problem with few treatment options. We’re currently seeing more deaths caused by fungal diseases than malaria and tuberculosis together, so it’s hardly surprising that fungal diseases have taken advantage of the fact that so many people have been hospitalized because of COVID-19,” said Gustavo Henrique Goldman, a professor at the University of São Paulo’s Ribeirão Preto School of Pharmaceutical Sciences (FCFRP-USP) in Brazil and one of the principal investigators for the study, which was supported by FAPESP.

Besides aspergillosis, the disease caused by fungi of the genus Aspergillus, co-infections concurrently with COVID-19 are caused by two other groups. Fungi of the order Mucorales are responsible for mucormycosis, which occurs mainly in India and Pakistan, while yeasts of the genus Candida cause candidiasis and are present practically the world over.

“COVID-19-associated pulmonary aspergillosis [CAPA] affects on average 10% of patients with acute respiratory insufficiency admitted to intensive care units. Patients with this co-infection are twice as likely to die as patients infected only by SARS-CoV-2,” Martin Hoenigl, first author of the study, told Agência FAPESP. Hoenigl is a professor at the University of California San Diego in La Jolla (U.S.) and at the University of Graz (Austria).

According to the article, aspergillosis can remain confined to the upper airways for many days and can be contained with antifungals. Once it has invaded blood vessels in the lungs, however, mortality exceeds 80% even if a systemic antifungal therapy is administered.

Candidiasis occurs almost exclusively in patients in intensive care units and is not more frequent in COVID-19 patients than those hospitalized for other reasons. However, Candida auris, an emerging fungus, is a concern because it can colonize the skin. In addition, it appears to be the only fungus transmitted between people. The species is resistant to all known antifungals and, being present in a wide array of environments, can easily infect patients on mechanical ventilators or with catheters and other invasive life support equipment present in hospitals.

COVID-19-associated mucormycosis (CAM) is a severe problem, especially in India, where the number of cases doubled during the pandemic. News of this mycosis drew international attention in 2021 when more than 47,500 cases were notified in India in the period May-August alone. Classed as an epidemic by the Indian government at the time, it was mistakenly called “black fungus” because of the color of the tissue necrotized by the disease. Actual black fungi are part of a different group that is relatively distant from Mucorales and does not cause disease in humans.

In COVID-19 patients, mucormycosis often occurs in the region of the eyes and nose, and can reach the brain. The mortality rate is 14% in these cases, in which the two diseases occur together. Because mucormycosis causes necrosis, it may require surgery and end up disfiguring the patient. Patients who survive it may lose parts of their face and suffer from problems for the rest of their lives. If the lungs are affected, or the fungus spreads throughout the organism, mortality reaches 80%.

“The prevalence of this mycosis in India was 0.27% in patients hospitalized with COVID-19, although it frequently occurs in people outside hospitals, such as those treated at home with very high doses of systemic steroids, which are easily obtained by most Indians,” Hoenigl said.

The use of steroids and other drugs that reduce immune system activity is one of the causes of the global rise in fungal infections. While the strategy was successful during the pandemic and the benefits surpassed the risks, the researchers warn that it is important to avoid abusive administration of immunosuppressant drugs.

As an alternative, some centers at high risk for aspergillosis successfully implemented antifungal prophylaxis during the pandemic by administering drugs before infection by these agents. However, because fungi are often resistant to most available medications and there are insufficient clinical studies to evaluate the strategy, it is not recommended at present.

“Immunosuppressants are a major advance in medicine. They prevent many deaths from cancer and autoimmune diseases, as well as playing a key role in organ transplants. However, a side-effect of their use has been a significant rise in the incidence of fungal infections,” Goldman said. “Except for some heat-tolerant species, such as A. fumigatus, fungi normally can’t tolerate mammalian body temperatures and are easily combated by our innate immunity. But when our immune system is too weak to fight off highly inflammatory diseases like COVID-19, they take the opportunity to attack us.”

In addition, many fungi are adapting to higher temperatures as the global climate warms up, and this also makes humans more vulnerable. As a result, novel antifungal medications are urgently needed, experts agree. Currently there are only four classes of antifungals, compared with dozens of classes of antibacterials (antibiotics), for example.

Another problem is the difficulty of diagnosing fungal infections. Diagnostic tests are too expensive for most people in low- and middle-income countries, and test results may take too long to become available for the right treatment to be prescribed.

For example, a 100% certain diagnosis of aspergillosis requires a bronchoscopy, a type of exam considered highly risky during the COVID-19 pandemic and hence avoided as much as possible. The amount of fluid expelled from the patient during the procedure is more than sufficient to transmit SARS-CoV-2 to the medical team. Cases of aspergillosis are probably underestimated as a result.

“The good news is that several novel classes of antifungals have been developed and are currently in phase 2 and 3 clinical trials,” Hoenigl said.

However, the researchers fear these novel drugs will not reach all those who need them. Cutting-edge treatments could remain confined to the rich countries, as the inequality of their availability is likely to continue.