Engineered nucleases, enzymes containing a nucleotide-specific DNA-binding domain fused to a non-specific DNA cleavage domain, are an essential component of genome editing. The product of nuclease action is a targeted DNA double-strand break (DSB), a category of DNA damage incurred by breakage both the sense and anti-sense DNA strands.

DSBs stimulate DNA damage response pathways in the cell, including non-homologous end joining (NHEJ) and homology-directed repair (HDR). These responses lead to custom alterations, such as insertions, deletions, and frameshifts in the sequence at the site of the DSB which can dramatically alter gene function or regulation.

Customizing the DNA-binding domain for targeted recognition of DNA in combination with careful selection of the effector cleavage domain results in a great deal of versatility. The effector domain may include nucleases, transcriptional activators and repressors, recombinases, transposases, DNA histone methyltransferases, and histone acetyltransferase.

All of these components can change the targeted site in a way that affects the spatiotemporal expression of the gene and the characteristics of the gene product.

Two such genome editing technologies based on the engineering of two-domain nucleases are Zinc-finger nucleases (ZFNs) and transcription activator-like effector nucleases (TALENs). A more recent technology is Clustered Regulatory Interspaced Short Palindromic Repeats (CRISPR) together with a CRISPR-associated protein (Cas), a genome editing system in bacteria, which functions differently compared to TALENs and ZFNs. 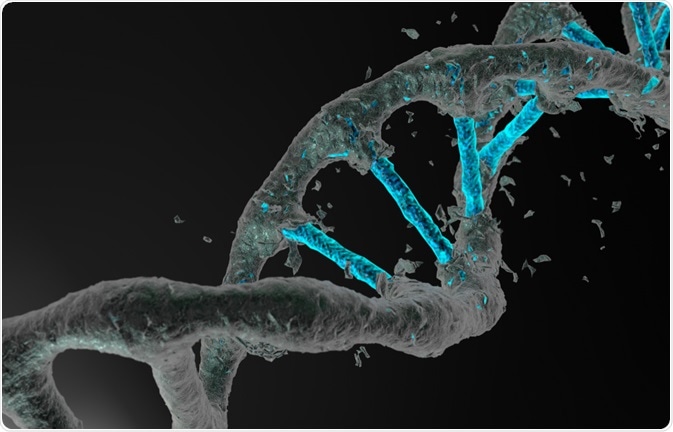 Both TALENs and CRISPR-Cas9 are endonucleases that target DNA for cleavage in a base-specific manner. TALENs are produced by fusing the TAL DNA effector (TALE) binding domain to a Fokl catalytic domain DNA cleavage domain. Dimerization of these fused domains enables recognition of two half-sites, designated ‘right’ and ‘left’, followed by FOK1-mediated DSB. These are separated by a nucleotide spacer sequence of variable length.

The binding specificity of the DNA binding domain can be manipulated by modifying two of the 33-34 amino acid repeats that make up the domain, called the repeat variable diresidue, or RVD. The construction of highly specific DNA binding domains, therefore, is achieved by combining several RVDs.

ZNFs are restricted to lengths of 9-18 bps. It also offers reduced off-target effects compared to ZFN. However, TALENs are larger than ZFNs – the cDNA encoding the system is ~3 kb, relative to the ~1 kb size required for ZFNs. TALENS is therefore precluded for use in therapeutic applications where viral vectors are used.

Is CRISPR superior to ZFN and TALENs?

In contrast to ZFN and TALENs, CRISPR recognition is dependent the dual guidance by crRNA and tracrRNA, cleaving 3-4 bps upstream of the PAM sequence rather than at the specific site, and in the absence of a DNA binding domain. Therefore, guide RNAs can be produced easily to target any sequence.

CRISPR systems are easy to use–this enables genome-wide libraries to be generated. It provides improved genomic targeting due to the dependence on DNA-RNA Watson-Crick base pairing, rather than DNA-Protein interaction.

It uses many parallel aligned RNAs to target several sites simultaneously and is thus regarded as a highly valuable technique. Whole organisms can be modified by directly injecting the RNA encoding CRISPR machinery into the embryo. The alternative option is more complex, requiring embryo stem cell gene targeting through HR, followed by selection and culturing.

However, CRISPR has a higher probability of having off-targets. The dependence on a single sgRNA, while being simple, results in poorer specificity. By contrast, TALENs has an engineered fail safe, requiring dimerization of TALEN pairs for cleavage.

Nonetheless, the simplicity, efficiency and low cost of CRISPR is a significant advantage over TALENS and ZFNs. It is important to note that all three techniques suffer from constraints in targeting, imperfect specificity and gene-targeting. Therefore, their implementation is left at the discretion of researcher based on the application.

Hidaya is a science communications enthusiast who has recently graduated and is embarking on a career in the science and medical copywriting. She has a B.Sc. in Biochemistry from The University of Manchester. She is passionate about writing and is particularly interested in microbiology, immunology, and biochemistry.