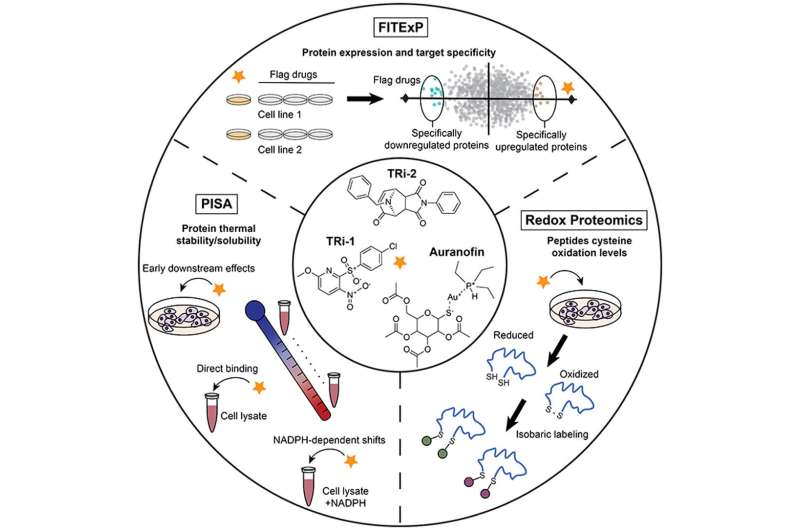 The gold complex auranofin has traditionally been used for treating rheumatism but is also being evaluated as a treatment for certain forms of cancer. Researchers at Karolinska Institutet in Sweden now show that other molecules that inhibit the same biological system have a more specific effect than auranofin and therefore may have greater potential as cancer therapies. The results have been published in the journal Redox Biology.

The gold complex auranofin (AF) is classed by the WHO (World Health Organization) as an anti-rheumatic agent and is an active component in the drug Ridaura. AF is also currently being assayed in a string of clinical trials as a possible cancer therapy.

One reason for the researchers’ interest in AF is its ability to inhibit thioredoxin reductase (TrxR), a protein central to the thioredoxin system, which protects cells from oxidative stress in all mammals. However, it also protects cancer cells, thus reducing the efficacy of cancer therapies. Moreover, TrxR, which affects cellular growth and survival, is upregulated in certain forms of cancer.

“There’s a great deal of interest in the ability to inhibit the thioredoxin system in the treatment of cancer, but there’s a risk that healthy cells will also be damaged and killed,” says the study’s co-last author Elias Arnér, professor at the Department of Medical Biochemistry and Biophysics at Karolinska Institutet. “Our aim is for TrxR inhibitors to be as specific as possible.”

The researchers studied the effects of AF in mouse cancer cells (lung adenocarcinoma and melanoma) and compared them with other TrxR-inhibiting molecules called TRi-1 and TRi-2 (thioredoxin reductase inhibitors 1 and 2). TRi-1 and TRi-2 have recently been developed by Elias Arnér’s research group and shown anticancer effects in mouse models.

The study, which was based on new proteomic methods of analyzing the entire set of proteins in cells, suggests that the TRi compounds are more specific in their effect than AF. The results show that AF causes very high levels of oxidative stress and has other effects that seem unrelated to the inhibition of TrxR. They also show that TRi-1 seems to be the most specific TrxR inhibitor described to date.

“Our results can serve as an important blueprint for further studies of AF’s mechanism of action and side effects,” says the study’s other co-last author Roman Zubarev, professor at the Department of Medical Biochemistry and Biophysics, Karolinska Institutet. “Having now compared AF with the more specific molecules TRi-1 and TRi-2, we hope that our findings will contribute to the further development of TrxR inhibitors as anticancer drugs.”