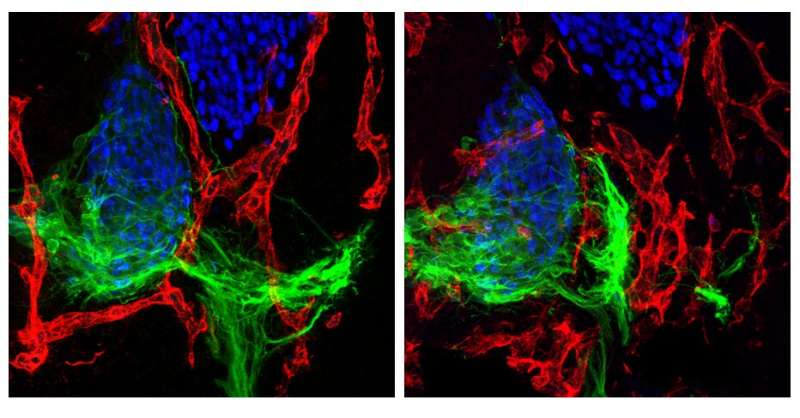 When neurons involved in movement—called motor neurons—form, they must build connections that reach from the brain, brainstem, or spinal cord all the way to the head, arms, or the tips of the toes. How neurons navigate these systems and “decide” where and how to grow has largely been a mystery.

Now, a new collaborative study between Salk Institute scientists and colleagues at the San Raffaele Scientific Institute in Italy show how blood vessel genes play a critical role in motor neuron development by telling blood vessels to get out of the way.

The findings, published October 7, 2022 in the journal Neuron, provide a new understanding of how a “push-pull” relationship with blood vessels—in which growing neurons both attract blood vessels to them while also pushing them out of the way—guides the growth and development of motor neurons and, potentially, a wide variety of cell types throughout the body.

The discovery also has implications for understanding diseases in which motor neuron connections are destroyed, such as amyotrophic lateral sclerosis (ALS) or spinal muscular atrophy (SMA).

“This discovery reveals a set of molecular and cellular interactions that had not been understood before,” says co-corresponding author Samuel Pfaff, professor in the Gene Expression Laboratory and holder of the Benjamin H. Lewis Chair at Salk.

“Our discovery of how these genes regulate blood vessel growth and neuron development has implications that range from understanding how other brain circuits form to even understanding how cancer cells interact with their environment.”

Motor neuron connections are formed during fetal development. This process of wiring the nervous system is exquisitely precise, with cells making trillions of connections that reach throughout the body. And yet the genetic process that directs this development is still poorly understood.

Prior research has focused on the role of specific genes directly related to motor neurons and how they grow. But for this study, scientists took a bigger-picture approach, looking at genes both within and outside of the nervous system.

The researchers randomized genetic mutations in mice and closely examined the animals’ developing motor neurons. To their surprise, they found that the mice whose motor neurons were not growing correctly had mutations that affected not the nervous system but the vascular system, which includes blood vessels.

In healthy mice, motor neurons can grow out from the spinal cord and navigate through surrounding tissues to reach distant muscle groups. However, the scientists observed that in the mice with vascular mutations, the motor neurons seemed to get stuck behind a barrier of blood vessels. They found that the mutation had affected the blood vessels’ ability to sense the approaching neurons and get out of the way.

“There is a collision between growing axons and vascular cells,” says co-corresponding author Dario Bonanomi, group leader for molecular neurobiology at the San Raffaele Scientific Institute in Milan, Ita.ly, and formerly of Salk. “When you take this receptor away from the blood vessel cells, the motor axons collide with blood vessels, and their progress toward the muscles is impaired and blocked.”

The finding illuminates the delicate dance of developing neurons, which need to attract blood vessels to fuel their growth, while also repelling them to move out of the way. It’s relevant to addressing the hurdles that must be overcome in the development of motor neuron “replacement therapy” using stem cells, a potential treatment for diseases where motor neurons degenerate, including ALS and SMA.

In the future, the scientists plan to examine the “crosstalk” between nerves and blood vessels in other contexts, as well as how the nervous and vascular systems respond to stroke, brain injuries, and degenerative diseases like ALS and SMA.