While some prefer the bald look, those who are unhappy about losing their hair might be interested to hear about a new approach where scientists use mechanical stimulation to promote hair regrowth. 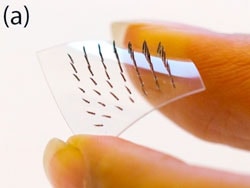 Male- or female-pattern baldness, also known as androgenetic alopecia, affects more than half of middle-aged men in the United States. While it is less common among women, it can affect people’s body image and psycho-emotional health, explains study co-author Fangyuan Li from the College of Pharmaceutical Sciences at Zhejiang University in Hangzhou, China. The impact can be severe, Li says, “especially for women and young people.”

Over-the-counter remedies are available, but most of them don’t get at the root causes of the problem, report the researchers.

Currently, FDA-approved drugs for hair loss include minoxidil and finasteride. However, there are side effects, and the treatments only work when continuously used for an extended timeframe.

Some people may opt instead to have hair follicle transplants; however, Li explains, the surgery is painful and not always successful because it is highly dependent on the quality of donor hair follicles, which can vary.

Seeking to develop a new nonsurgical option, the scientists led by Jianqing Gao, also from Zhejiang University in China, designed a dissolvable microneedle patch to deliver treatment near hair roots beneath the skin.

Male- or female-pattern baldness can be permanent when there aren’t enough blood vessels surrounding hair follicles to deliver nutrients and other essential molecules. An accumulation of reactive oxygen in the scalp can prompt the death of cells that would otherwise grow new hair.

In a previous investigation, the researchers found that nanoparticles containing cerium, a silvery white metal, can mimic the enzymes inside the body that can help ease oxidative stress.

The scientists coated cerium nanoparticles with a biodegradable compound.

Then they made the microneedle patch by pouring a mixture of hyaluronic acid – a substance that grows naturally in human skin – with cerium-containing nanoparticles into a mold.

The small needles don’t hurt when applied, Li says, as they deliver treatment to a region under the skin with no pain receptors.

The researchers tested control patches and the cerium-containing ones on male mice with bald spots created by a hair removal cream. Both applications stimulated the formation of new blood vessels around the mice hair follicles. However, those treated with the nanoparticle patch showed faster signs of hair recuperation at the root.

The mice also had fewer oxidative stress compounds in their skin. Microneedle patch use resulted in faster hair regrowth compared to a cream-based treatment and could be applied less frequently.

The idea is not yet ready to be tried on people, however, it represents an inventive step forward in addressing a common problem.