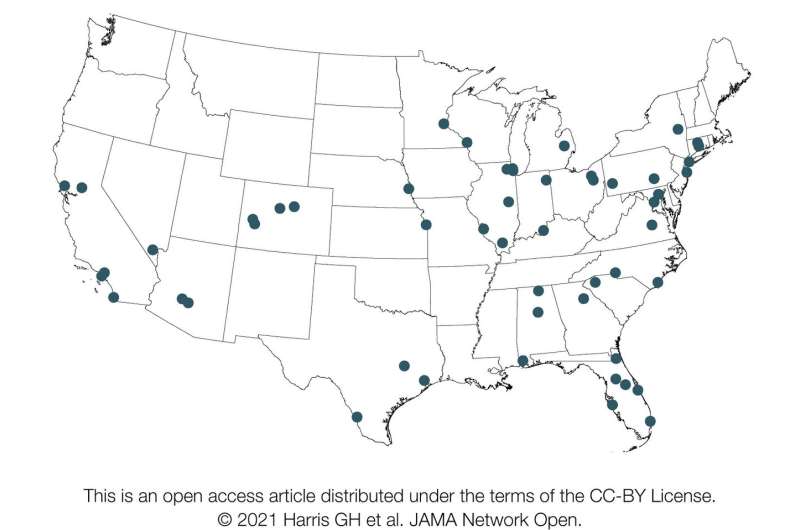 A University of Pittsburgh School of Medicine-led survey of dozens of surge capacity managers at hospitals nationwide captures the U.S. health care system’s pandemic preparedness status in the months before the first COVID-19 cases were identified in China.

Published today in the journal JAMA Network Open, the investigation details the strain experienced by U.S. hospitals during the 2017-18 influenza season, which was marked by severe illness and the highest infectious disease-related hospitalization rates in at least a decade. At the time, pandemic planning within hospitals was not reported as being a high priority.

“The timing for our survey couldn’t have been better—ultimately it serves as a pre-COVID-19 time capsule of our preparedness to accommodate surges in patients needing hospitalization for acute illness,” said senior author David Wallace, M.D., M.P.H., associate professor in Pitt’s departments of Critical Care Medicine and Emergency Medicine. “It was surprising to hear very detailed stories of the strain hospitals were under during the 2017-18 flu season, and yet have no pandemic planning come out of it.”

The 2017-18 flu season was associated with more than 27.7 million medical visits, nearly a million hospitalizations and almost 80,000 deaths, according to the U.S. Centers for Disease Control and Prevention. That is more than double the deaths in a typical flu season and the highest hospitalization rate since seasonal influenza surveillance was instituted in 2005.

Wallace and his team—which included specialists in health policy, medical anthropology and infectious diseases—interviewed surge capacity managers at a random sampling of 53 hospitals across the U.S. starting in April 2018, at the tail end of the flu season. Using a structured survey, they recorded detailed interviews about everything from ICU bed capacity and staffing ratios to the perceived effect of strain on quality of patient care and staff well-being.

All of those surveyed reported experiencing hospital strain during the 2017-18 flu season. Strain was generally described as the result of high patient occupancy causing demand to outstrip the supply of resources—in fact or in perception.

The “4 S’s”—staff, stuff, space and systems—were reported as the widespread challenges that surge capacity managers consistently faced in continuing health care operations during the flu season. Staff was a particular concern, due to fatigue or staff being out sick with flu or caring for ill family.

“This demonstrates that the perceptions of strain on staffing, patient care and capacity that we have seen during the COVID-19 pandemic were already present with prior epidemics,” said lead author Gavin Harris, M.D., an assistant professor in the Emory University School of Medicine, who did this research while at Pitt. “Less than two years before COVID-19 took off in the U.S., we were experiencing a preview of the strain that a fast-spreading, severe respiratory infection places on our health system.”

In fall 2013—four years before this challenging flu season—the U.S. Department of Health and Human Services Office of the Assistant Secretary for Preparedness and Response produced the Interim Healthcare Coalition Checklist for Pandemic Planning report, which identified eight categories hospitals should address when planning for crises, specifically surges in acute care needs. None of the survey participants commented on all eight categories, nor did any specifically report using the checklist.