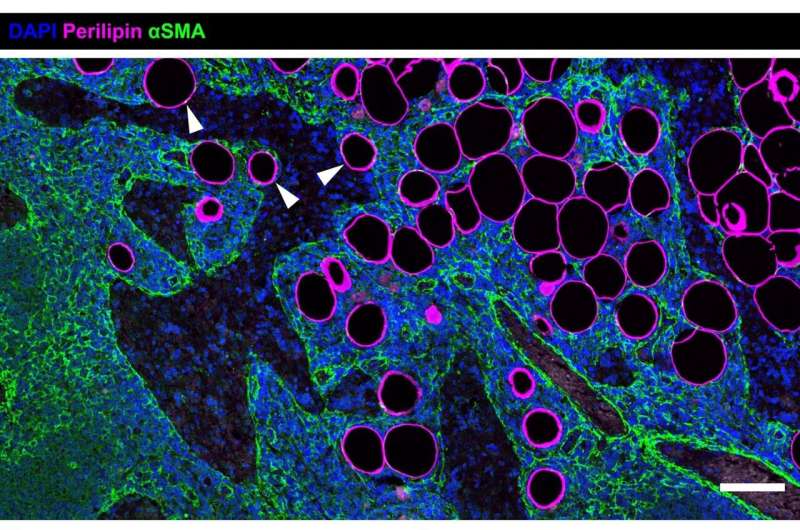 Lymph nodes normally serve as the headquarters of our immune system. When we get an infection or are vaccinated, the lymph nodes are the sites where the immune cells congregate, are activated and proliferate so as to be able to mobilize an effective immune defense. However, as we age, the normal tissue in the lymph nodes (the stroma) is gradually replaced by adipose tissue (fat). The phenomenon is known as lymph node lipomatosis. Although lipomatosis is very common and increases with age, researchers have previously devoted very little discussion and research to it.

By careful analysis of more than 200 lymph nodes, Maria Ulvmar’s group demonstrates that lipomatosis begins in the central part of the lymph node, known as the medulla, and presents evidence linking lipomatosis to the transformation of the supporting cells of lymph nodes (fibroblasts) into adipocytes (fat cells). They also show that specific types of fibroblasts located in the medulla are more prone to become adipocytes.

The study shows that even at early stages of lipomatosis, negative changes arise that impair the ability of the lymph node to provide effective immunity. Among other observations, they note that the specialized blood and lymphatic vessels that normally provide channels for immune cells to enter and leave the lymph node are destroyed in the parts of the node where fat has formed. Lipomatosis of lymph nodes, even at early stages, may therefore be one important factor behind the poorer response to vaccinations observed in elderly people. Ultimately, the fat completely takes over the lymph node and it loses its ability to function.

“Our study is a first step towards understanding why lipomatosis occur, and towards the longer term goal of finding ways to prevent its progression and the destruction of the lymph node,” says Tove Bekkhus, first author of the study.

The researchers are currently unable to mimic the effects they observe in human lymph nodes in the animal models that are often used to study the effects of aging. This underlines the importance of studies based on direct analysis in human subjects of the changes associated with aging.

“I hope our work will spur an interest among other researchers in including lymph nodes lipomatosis as a factor when studying elderly people’s responses to vaccination and infections. The changes we observe are also highly relevant to cancer research, since in several types of cancer, the lymph nodes are the first place cancer cells spread to,” explains Maria H. Ulvmar, researcher at Uppsala University, who led the study.

“Our publication provides the first chapter of a story about fat and loss of function in our lymph nodes when we age. We will now continue to develop this story by designing new studies to learn more about the underlying causes and consequences of these changes,” Ulvmar says.

The work is published in The Journal of Pathology.