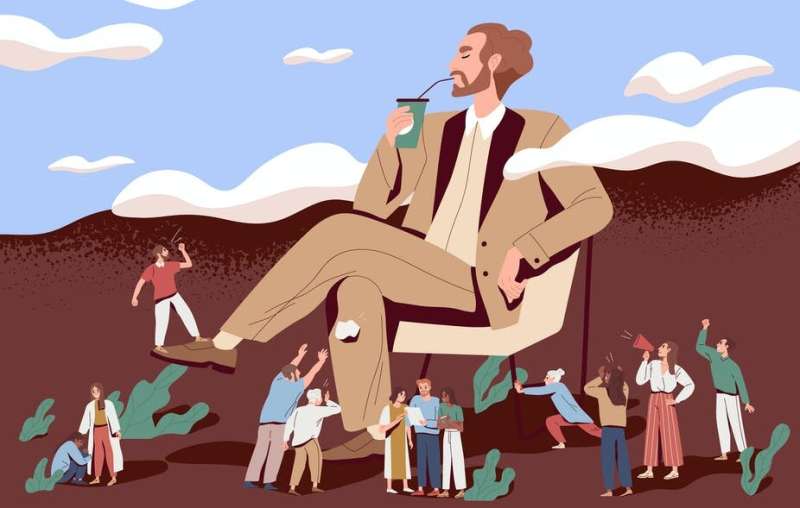 One of the human race’s biggest problems has been that people who occupy positions of power are often incapable of using power in a responsible way. In the past, this was mostly due to hereditary systems which assigned power to kings and lords and others, who often didn’t have the intellectual or moral capacity to use their power well. But in more recent times, it seems as though power attracts ruthless and narcissistic people with a severe lack of empathy and conscience.

In psychology, there is a concept of a “dark triad” of malevolent personality traits: psychopathy, narcissism and Machiavellianism. These traits are studied together because they almost always overlap and combine. If a person has psychopathic traits, then they tend to have narcissistic and Machiavellian traits too.

People with these personalities can’t sense other people’s feelings or see the world from any perspective apart from their own. They don’t have a sense of conscience or guilt to stop them behaving immorally. They feel superior and enjoy manipulating and controlling other people. At the same time, they need to feel respected and admired and like to be the centre of attention.

There’s a great deal of evidence that people with dark triad personalities are attracted to the corporate and political worlds. Research, for example, shows that people with narcissistic and psychopathic traits have a strong desire for dominance and are disproportionately common in leadership positions.

As the psychologists Niklas Steffens and Alexander Haslam put it, “like moths to a flame, narcissists may be drawn naturally to positions of power and influence.” Or as the psychologist Robert Hare writes of psychopaths, they “are social predators and like all predators they are looking for feeding grounds. Wherever you get power, prestige and money, you will find them.”

The most evil leaders of the 20th-century, such as Stalin, Hitler, Mao Zedong, Pol Pot, Saddam Hussein and Colonel Gaddafi, clearly had severe dark triad traits. They didn’t become leaders because of their ability or intelligence, but simply because they had a tremendous desire for power and were incredibly ruthless and cruel in their pursuit of it.

Many present day politicians appear to have psychopathic and narcissistic traits too. It’s easy to spot such leaders, because they are always authoritarian, following hardline policies. They try to subvert democracy, to reduce the freedom of the press and clamp down on dissent. They are obsessed with national prestige, and often persecute minority groups. And they are always corrupt and lacking in moral principles.

In democratic countries such as the UK and the US, one could argue that there is less likelihood of psychopathic people becoming leaders. But there’s still a serious problem with highly narcissistic, ruthless and non-empathic people attaining power. This is clear from Donald Trump’s presidency.

Like many mental health professionals, the president’s niece, Mary Trump—a clinical psychologist—voiced her opinion that Trump suffers from a range of personality disorders. She suggested that his main issue was his severe narcissism, but also that he “meets the criteria for antisocial personality disorder, which in its severe form is generally considered sociopathy.”

Over time, as sensible and responsible people left his administration, Trump attracted others with similar personality traits to himself. In this way, his regime became what the Polish psychologist Andrew Lobacewski called a “pathocracy”—a government consisting of people with personality disorders. In the UK there has also been a trend for leading politicians to display signs of narcissism, ruthlessness and a lack of empathy. This also suggests a movement towards pathocracy.

The essence of the problem is that callous, low-empathy people are drawn to power, whereas empathic and responsible people (who would make ideal leaders) don’t have a desire for dominance. They usually prefer to remain on the ground, interacting with other people. This leaves positions of powers free for the wrong people.

What can be done?

Like others who have studied the problem of “corporate psychopathy,” the Australian psychologist Clive Boddy has suggested that companies should screen leadership candidates for psychopathy. In my view, we should do something similar in politics. Every government (indeed every organization) should employ psychologists to assess potential leaders and determine their suitability for power.

Personality tests might not be much use, because dark triad personalities are manipulative and dishonest. But other assessments could be used. It’s widely accepted there are childhood signs of dark triad traits, such as callousness and cruelty and a lack of empathy, guilt and emotion. So psychologists could examine the candidate’s life history, interviewing previous supervisors and coworkers. They could also speak to past acquaintances, former schoolteachers or university tutors.