For many people, the decision to get a pet is a natural one, because they grew up with pets and a home feels incomplete without one. Some people are looking for company as an antidote to sadness or loneliness, or because they seek unconditional loyalty or motivation to get up in the morning. Some parents want their children to learn the responsibility of caring for a pet.

When I was growing up we always had a dog in our home. Interestingly, I never felt like any of them was “my” dog, and didn’t feel a particularly strong connection. 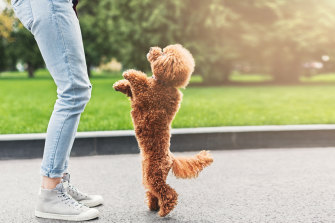 Pets lower the levels of cortisol, the “stress hormone”, and provide relief of depression, anxiety and social isolation. Credit:iStock

Then one day my wife, Jackie, started talking about getting a puppy. I resisted, knowing how much work and attention it would need. But anyone who knows Jackie will also know that she can be very persistent. Eventually I relented, and we welcomed a tiny black toy poodle into our family. We called her Paris. (French poodle, right?) Eight months later, Lulu arrived, another tiny poodle. They changed our lives in ways I could never have anticipated.

The profound psychological effects of having a family pet are well documented. Animal lovers know that having a pet can make you feel calmer, less anxious and more loved.

There is a particular joy to being greeted by an excited dog when you get home from a long day at work, or even just when you come back in from putting the garbage out! 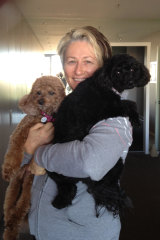 A friend of mine took that a bit further, joking (confessing?) that she secretly liked her dogs more than her children because the dogs gave her less trouble, made her feel better about herself and they loved her unconditionally.

We also have evidence of the positive physical effects of having a dog, such as improved fitness (if you are the one who walks your dog), lower blood pressure, lower cholesterol and triglyceride levels and lower risk of heart attack. The lower blood pressure is not just a result of walking your dog for exercise. The blood-pressure drop is an immediate effect of patting a dog.

In 2013, a group of cardiologists reviewed the evidence on pet ownership and heart disease for the American Heart Association. They concluded that “Pet ownership, particularly dog ownership, is probably associated with decreased cardiovascular disease risk.”

The effect starts in childhood. There is evidence for an association between pet ownership in childhood and a wide range of emotional health benefits. Overall, pet ownership shows benefits to child and adolescent emotional, cognitive, behavioural, educational and social development. These effects are particularly seen in the areas of self-esteem, loneliness and social competence.

In older people, we know that pet ownership can improve a person’s mental health by providing companionship, meaning and purpose, relieving loneliness and encouraging social interaction.

That is the effect of having a pet, but what is the underlying mechanism? What actually happens in the brain to make these positive changes?

Pets lower the levels of cortisol, the “stress hormone”, and provide relief of depression, anxiety and social isolation. Some neurotransmitters, including oxytocin, serotonin and dopamine, have also been studied to identify how they are affected when we interact with our pets.

Let’s have a look at these neurotransmitters more closely.

Oxytocin is one of the body’s “feel good” chemicals. It is produced in the hypothalamus and then transported to and released by the posterior pituitary gland at the base of the brain. It is known as a neurotransmitter and a hormone, and has a number of specific functions in women, including reproduction and orgasm. It also has an integral role in childbirth and breastfeeding. Oxytocin is released when a mother bonds with her child.

Oxytocin has a number of psychological effects, too. It relieves feelings of stress, and enhances a sense of trust and connectedness with others.

When you stroke or pat your dog or cat, your oxytocin levels rise significantly, creating a sense of calm. This is the same reaction a mother has when she holds her child.

There is no doubt that the emotional attachment to a pet can be extremely strong, with many people saying that their pet is as much a member of their family as the human members.

As discussed earlier, dopamine is a type of neurotransmitter, a chemical produced in the body and used to convey messages between brain cells.

Dopamine is involved in positive feelings and bonding. Abnormal levels of dopamine in different parts of the brain are associated with several neurological disorders such as schizophrenia, bipolar disorder, Tourette syndrome, Parkinson’s disease, Alzheimer’s disease and ADHD.

Dopamine has been called the “pleasure hormone” because it is associated with the human experience of pleasure. Being with your dog also releases dopamine. This boosts both your mood and long-term memory.

Serotonin is another type of neurotransmitter with a profound impact on mood. A commonly prescribed type of antidepressant medication, selective serotonin reuptake inhibitors (SSRIs), increases levels of serotonin in the brain by blocking the reuptake of serotonin into nerve cells in the brain.

Researchers have discovered that patting dogs causes a spike in serotonin levels. Elevated serotonin levels can give you a sense of calm, reduce anxiety and promote feelings of happiness.

That makes your pet a type of natural antidepressant.

A word about practicalities

Of course, while all of this evidence is intriguing, the decision to get a dog cannot be made on an emotional basis. That decision needs to take into account many factors, including the time you have to train, exercise and care for a dog, particularly in the puppy stage, and the financial and practical commitments if it becomes sick or elderly. A dog is a considerable commitment, and it is not for everyone. Other practical considerations include upkeep and vet bills, which can cause a lot of financial stress if things go wrong.

You also have to try to look ahead up to 15 years or longer. What will that mean for your personal life plans and the wellbeing of the animal?

Your heart or brain health is a positive benefit, but not a reason to make the significant commitment of getting a pet.

Once you have worked through the practicalities and confirmed that adopting a pet is the right thing for you and your family, you can expect some positive side benefits for your health, particularly for your brain.

Sometimes the value of a relationship is most recognised in its loss. This is true of pets.

At the time I lost Paris, who died aged 11 of cancer, a friend said to me, “That’s what you sign up for when you get a puppy. You just don’t realise it at the time.”

It was worth it.

Edited extract from How to Keep Your Brain Young by Professor Kerryn Phelps AM (Pan Macmillan), $34.99, out on September 28.