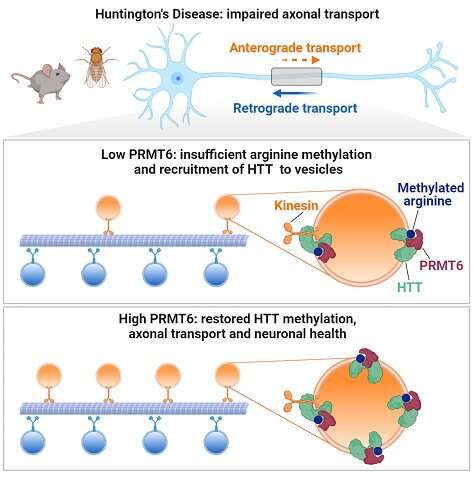 Huntington’s disease is a genetic neurodegenerative disorder caused by mutations in the protein huntingtin and characterized by involuntary dance-like movements, severe behavioral changes and cognitive impairment. That neuronal traffic is impaired in this disease has been very well known for several years. But that this deranged trafficking could be ameliorated by increasing huntingtin methylation was not yet known. The findings emerged from an international research work coordinated by the University of Trento and published in Cell Reports.

The research teams identified the fundamental role of the protein arginine methyltransferase PRMT6 in ensuring transport along axons, the routes that connect nerve cells to each other, and hence the health of neurons. According to the study, neural impairment and degeneration are caused by the loss of methylation of huntingtin, the protein that regulates the traffic. The researchers therefore focused on how to restore huntingtin’s function and observed benefits associated with increased expression of PRMT6.

“We have learned that huntingtin, the protein that causes Huntington’s disease when mutated, is modified by an enzyme (PRMT6) that is capable of adding methyl groups (small flags) to teach other proteins, responsible for axonal transport, to recognize huntingtin. When huntingtin is not recognized, axonal traffic slows down. Imagine axonal transport like a train. Huntingtin works like a driver that checks tickets and opens the doors at the station, that means it loads proteins or various organelles that are transported from one side of the axon to the other. With no functional huntingtin, the traffic is altered. The flags provided by PRMT6 derive from metabolic cycles that depend on vitamins B9 and B12. It will be interesting to measure the level of B9 and B12 in patients with Huntington’s disease and perform both in vitro and in vivo experiments to find out if an increase in vitamin intake in neurons can lead to an increase in huntingtin methylation and therefore restore its function. That is what we will work on in the coming months with Alice, our young investigator,” concluded Manuela Basso (corresponding author for the University of Trento).

“Neurodegenerative diseases are associated with an impairment of neural function. Unfortunately, the mechanisms underlying these pathological processes are still unknown and there are no treatments to stop or delay the progression of these devastating disorders. This research work sheds light on the importance of the interaction of proteins, like huntingtin, with factors that regulate gene expression in cells, like PRMT6. Our study adds a new piece to the puzzle of neurodegenerative disorders. Having established that huntingtin interacts with PRMT6, and understood the functional role of this interaction in normal conditions and in disease, we will now be able to understand what to do to restore this process and improve neural function to the benefit of patients,” explained Maria Pennuto (corresponding author for the University of Padova).

The international research project brought together Italian, French, Spanish and American contributions. The study was inspired by a discovery by Maria Pennuto (University of Padova and Veneto Institute of Molecular Medicine—VIMM) reported in 2015 in the journal Neuron, and was developed mainly by Alice Migazzi and Chiara Scaramuzzino in the laboratories of the Department of Cellular, Computational and Integrative Biology, University of Trento (Laboratory of Transcriptional Neurobiology, led by Manuela Basso), and in the laboratory of Frédéric Saudou at Grenoble Institut des Neurosciences. The research work on Huntington’s disease will continue thanks to the grant awarded by Fondazione Caritro to Alice Migazzi.