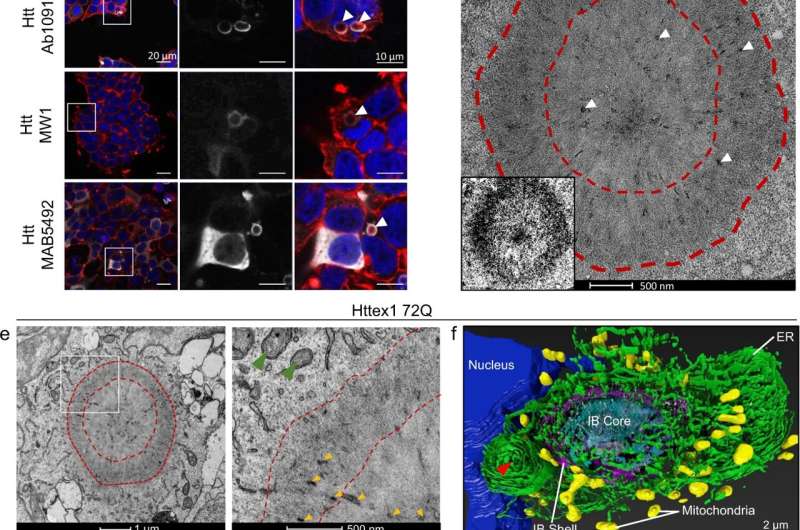 Huntington’s disease is a progressively debilitating brain disease that causes uncontrolled movements, psychological problems, and loss of cognition. Huntington’s is caused by a mutation in the gene that encodes huntingtin, a protein that normally plays important roles in keeping brain cells healthy and active. But the mutation gives huntingtin an abnormally long tail of glutamine amino acids, which cause huntingtin to aggregate inside neurons and eventually kill them.

These aggregates, or inclusion bodies, of huntingtin have been the subject of a lot of research efforts in the attempt to find a way to understand and treat Huntington’s. What has been missing, though, is a deep analysis of the inclusions’ ultrastructure—a term that describes the level of structure that lies beyond the capacity of a conventional microscope to observe.

Using advanced microscopy and proteomics, scientists led by Hilal Lashuel at EPFL, in collaboration with the Biological Electron Microscopy Facility, have now successfully carried out the first study that interrogates both the ultrastructure of huntingtin inclusion bodies and their composition in cells that model the pathological formation of Huntington’s disease. The work is published in Nature Communications.

The researchers used an advanced technique known as correlative light-electron microscopy (CLEM) that can identify inclusions in different cell compartments (cytoplasm or nucleus) and study their structural and organizational features of inside cultured neurons. CLEM essentially combines an electron microscope with a fluorescence microscope. The first provides high-resolution information down to the nano-scale, while the fluorescence microscope can (literally) highlight regions of interest.

The researchers also used electron tomography, which allowed them to visualize individual aggregates within these inclusions. “We wanted to go beyond just painting a detailed picture of how these inclusions form,” says Nathan Riguet, the study’s first author. “This is why we extended our studies to understand how these inclusions form, how they impact their subcellular environment, the function of organelles in their vicinity, and ultimately the viability of neurons.”

The study found that the aggregation of huntingtin and the formation of inclusions in the cytoplasm and nucleus of neurons occurs through different mechanisms, lead to distinct biochemical and ultrastructural properties. What this means is that these two types of inclusions may also be toxic through different ways, meaning that treatments must employ different strategies to address their formation, maturation, and toxicity.

The study also suggests that finding ways to modify the growth of inclusions and their interactions with other proteins and organelles is a valid, alternative or complementary strategy for slowing the progression of Huntington’s, especially after disease onset. This is because this process leads to the sequestration of functional proteins and disrupts the function of important organelles in the cell such as the mitochondria. The authors state: “…[W]e believe that targeting inclusion growth and maturation represents a viable therapeutic strategy.”

“Our findings also caution against the use of large fluorescent protein tags to develop disease models of HD and screen for drugs that modify Huntingtin aggregation and inclusion formation,” says Lashuel. “This has significant implications for Huntington’s disease and other neurodegenerative diseases, where fusion of fluorescent proteins is commonly used to investigate mechanisms of protein aggregation and in drug discovery.”