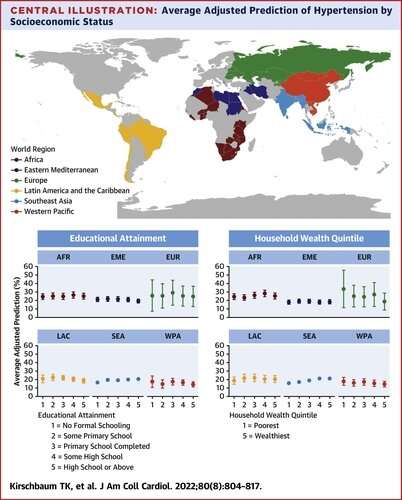 Hypertension is a prevalent condition among the least educated and poorest people in low- and middle-income countries (LMICs), despite often presumed low rates of common risk factors like sedentary lifestyle and obesity, according to a study published today in the Journal of the American College of Cardiology. However, investment in interventions toward reducing hypertension rates and risk in these regions is lacking compared to other global health issues like HIV, tuberculosis and malaria.

“Achieving equity in health requires an understanding of which health conditions are most prevalent among the most socioeconomically disadvantaged segments of society,” said Pascal Geldsetzer, ScD, senior author of the study and assistant professor of medicine in the Division of Primary Care and Population Health at Stanford University in Stanford, California. “This is especially important for hypertension because those with low socioeconomic status are generally least able to access high-quality health care for strokes and heart attacks and are typically most dependent on their full health to earn a living.”

Researchers looked at more than 1.2 million people in 76 LMICs, which were categorized into six regions according to the World Health Organization’s regional groupings: Africa, Eastern Mediterranean, Europe, the Americas, Southeast Asia and the Western Pacific. The median age was 40 years old and 58.5% were female.

They found that the differences in hypertension prevalence between groups divided according to education level and household wealth were small in most countries. Findings that researchers said may be “counterintuitive” because the poorest people in LMICs are often assumed to engage in large amounts of physical activity through manual labor and not be overweight or obese. However, other risk factors like aging and pollution, might be a cause of high hypertension rates. There were some variations in findings, including in Southeast Asia where there was a greater prevalence of hypertension in more educated and wealthier people and in countries with lower gross domestic product versus higher gross domestic product, but absolute differences were still small.

“Policymakers who are concerned with improving health among the most disadvantaged groups may want to invest in improving hypertension prevention and control among these groups,” Geldsetzer said. “This appears particularly justified given that we have found in previous research that adults with the least education and household wealth are least likely to be on treatment for their hypertension and ultimately achieve control of their blood pressure.”

In a related editorial comment, Yashashwi Pokharel, MBBS, MSCR, assistant professor of cardiology and an affiliate in the Office of Global Health at Wake Forest School of Medicine in Winston-Salem, North Carolina, said the global hypertension burden is “dismal,” and there has been little data on the differences in hypertension prevalence by socioeconomic status.