Breast cancer wasn’t ever on my radar. Despite the fact that I’d had two — thankfully benign — breast masses removed in a ten-year span, I wasn’t worried about cancer. The surgeons said I had dense breast tissue, something that wasn’t uncommon. This type of tissue makes masses harder to see on imaging, but not to worry. I was given the all-clear, twice.

I continued to do my self-exams, intermittently. When I found a third mass, I knew what to do. I promptly scheduled an appointment with my gynecologist. She ordered a mammogram (my first) and an ultrasound. Both showed a small, but non-concerning mass. The radiologist told me to have another mammogram and ultrasound in six months and sent me on my way.

Initially, I was relieved. However, for days following the good news, I had a nagging feeling that something wasn’t right. I called my gynecologist’s office. The nurse told me I was always welcome to get a second opinion, offering me the names of a few local breast surgeons. I chose the one closest to my home and scheduled an appointment.

The breast surgeon was brisk but empathetic. She did an ultrasound in-office, frowning at the screen as she rolled the wand across my skin. She recommended we do a needle biopsy to see what we were dealing with. I agreed, and I had the biopsy done a week later. Then my family and I left for vacation. I knew I would get the results when we returned.

The day my world fell apart, I strolled into the surgeon’s office with an iced coffee in my hand. It was a balmy summer day. I dare say that I was almost excited, convinced that I would be given the news I was hoping for. I was wrong. 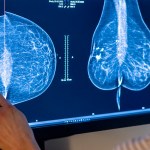 “I walked into her office that day, a mom of four, a writer, and a wife. I left that day adding a new identity to my list: I was a breast cancer patient.”

The doctor knocked on the exam room door, letting herself in before I could say I was already in my mauve, thin medical gown. She pleasantly asked me how my vacation was, but I was quick to say “fine” and get to the reason I was there. Her demeanor shifted. She lowered her voice, looked into my eyes, and told me I had breast cancer.

I walked into her office that day, a mom of four, a writer, and a wife. I left that day adding a new identity to my list: I was a breast cancer patient.

My mind was racing. Was I going to die? Would I need chemotherapy? What kind of surgery was best? Would I need to buy some head scarves? Had I been a good enough person?

The reality is, I thought I was breast cancer’s exception. After all, I’d managed to avoid cancer twice. The joke was on me. Third time’s a charm, or so they say.

It’s been over five years since I was first diagnosed. A lot — and I mean a lot — has transpired since then. I had a mastectomy with direct-to-implant reconstruction. I then had breast implant illness. When I decided to have my implants removed, I waited for over six months for my surgery date due to the pandemic. During that time, I felt a mass in my chest wall. Long story short, I was diagnosed with breast cancer—again. I underwent multiple surgeries, three months of chemotherapy, a year of immunotherapy, and thirty-three rounds of radiation.

I am grateful to be alive, declared as NED — that’s no evidence of disease. Even though I hate cancer, it has taught me some important lessons. One of these lessons is that no person is “too” anything for breast cancer.

I was young (thirty-five), educated (master’s degree), and by-all-standards, quite healthy. I never smoked a cigarette, I rarely consumed alcohol, I exercised every day, and I ate a mostly vegetarian, organic diet. I still got breast cancer. I later learned that one in eight women will be diagnosed with breast cancer in her lifetime. Of those women, about 9 percent of us are younger than forty-five-years-old.

Since I’m commonly asked this, I want to share. I tested negative for the breast cancer genes, nor at the time of my first diagnosis did I have any family members who had the disease. Perhaps this is partly why I wasn’t worried about cancer choosing me. I had none of the common risk factors. However, I have since learned that approximately, a whopping 85 percent of women diagnosed with breast cancer don’t have a family history of the disease.

Before I was diagnosed, I obliviously believed that breast cancer was something that only happened to other women. I am not sure if I was simply ignorant or prideful—maybe both. For whatever reason, breast cancer selected me. For five years, I have been part of the pink ranks, praying for healing, imploring for a cure, and hoping that when others hear my story, they do their self-exams, get their mammograms, and trust their instincts. Because cancer doesn’t play favorites.

Before you go, check out these products patients and survivors of breast cancer can actually use: