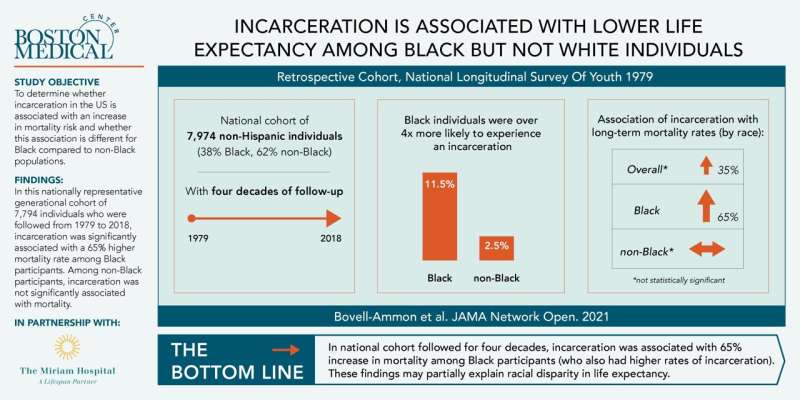 The United States incarcerates a greater number and proportion of people than any other country in the world—with a dramatic increase in incarcerations in the last four decades. This exhibits as a form of structural racism because this increase has disproportionately impacted non-White groups, particularly Black men. Prior research has shown that after incarceration, the initial process of transitioning back into life in the community is a very stressful and dangerous period where the risk of death is extremely high, particularly due to drug overdose, among many other health threats. However, few studies have been able to look at the long-term impacts that incarceration has on health over the years that follow.

“Our study results show that the experience of incarceration can lead to substantial, long-lasting harm to someone’s health, in the form of higher mortality rates in the years following incarceration, and this effect was much greater among Black individuals than others,” said Ben Bovell-Ammon, MD, MPH, a visiting fellow in general internal medicine at Boston Medical Center and a postdoctoral research fellow at The Miriam Hospital in Providence, which supported the research project.

In this retrospective cohort study, researchers analyzed data from the National Longitudinal Survey of Youth, which included non-institutionalized young adults between the ages of 15 and 22 in 1979. These individuals were followed up until 2018. There were 7,794 individuals included in the sample, and 50 percent were male and 38 percent identified as Black.