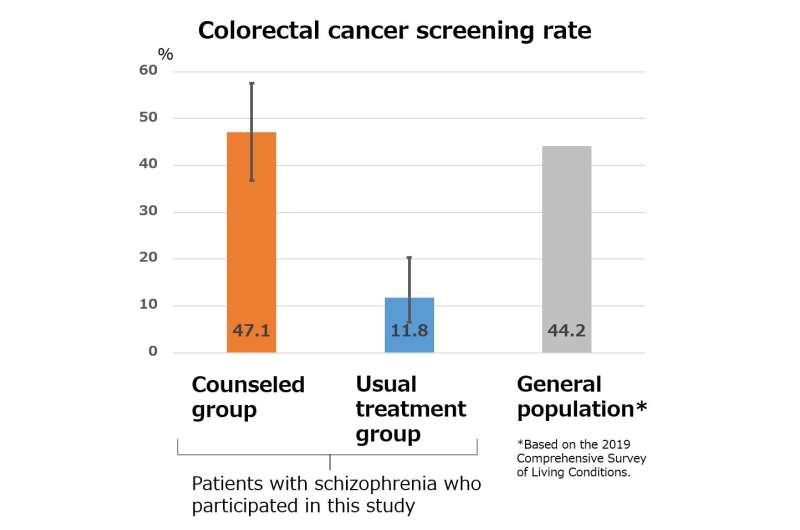 Cancer is a leading cause of mortality in patients with mental illnesses. Although individuals with mental illnesses are equally vulnerable to cancer as the general population, they are at a much higher risk of cancer-related mortality. Owing to a lack of early screening in most cases, such patients are often diagnosed when the cancer has progressed to a much-advanced stage, thereby limiting their treatment options and prognosis.

Schizophrenia is one such mental illness in which rational and coherent thinking in the affected individuals is often adversely affected. This has implications for accurate disease diagnosis in these individuals, including cancer. In fact, the evidence for cancer screening in patients with schizophrenia is scarce, with disparities across different cancers. It is thus imperative to develop programs that encourage such patients to undergo early cancer screening. To this end, in a first-of-its-kind study, researchers from Okayama University, Japan, have conducted a randomized trial to assess the benefits of interventions for early cancer screening in patients with schizophrenia.

One hundred and seventy-two patients with schizophrenia across two psychiatric hospitals in Japan were randomly assigned to receive either assistance for cancer screening in addition to their usual treatment, or only the latter. A case management team was recruited from among the hospital personnel to inform and assist the patients towards the colorectal cancer (CRC) screening procedure. Primary outcome was assessed as participation in colorectal cancer screening involving a fecal occult blood test, while secondary outcomes included screening for other cancers including breast, gastric, lung, and cervical cancers. Three counseling sessions were conducted for the group receiving assistance for cancer screening. Patients were educated about the importance of early cancer screening, assisted to make an appointment, and helped to avail free screening where necessary. Case managers also helped patients navigate ways to resolve problems that they faced during the process through telephonic follow-up counseling sessions.

These findings suggest that patients with schizophrenia can participate in cancer screening to the same extent as the general population, albeit with some assistance. Implementing such support services at psychiatric centers can help improve awareness and participation in early cancer screening among patients with mental illnesses. Moreover, a comprehensive follow-up process can ensure that patients suspected of having cancer from the primary screening are encouraged to undergo colonoscopy and seek further treatment if required. Efforts in this direction can help decrease cancer-related mortality and improve patient outcomes in such populations.

“The dissemination of this intervention into routine clinical practice may help bridge the gap between early detection of cancer and mortality across people with schizophrenia and the general population,” Dr. Fujiwara concludes.