Home » Health News » Is your plant-based BBQ REALLY healthier than a meat one?

Is your plant-based BBQ REALLY healthier than a meat one? Vegetarian and vegan alternatives of sausages, burgers and kebabs can contain up to 10 TIMES more sugar

Vegetarian and vegan equivalents of the country’s favourite BBQ foods can contain up to 10 times more sugar, MailOnline can reveal.

And the worst-offending meat-free alternatives — which are often bandied as healthier compared to traditional staples — are up to six times saltier.

Dietary experts warned meat-replacement items should not automatically be perceived as being ‘healthier’ just because they contain no red meat.

But they admitted that higher sugar and salt levels may not necessarily be worse because many veggie options have fewer calories, less fat and more fibre.

Our analysis delved into the nutritional benefits of a selection of BBQ favourites, including sausages and burgers, as well as kebabs, bacon and meatballs. 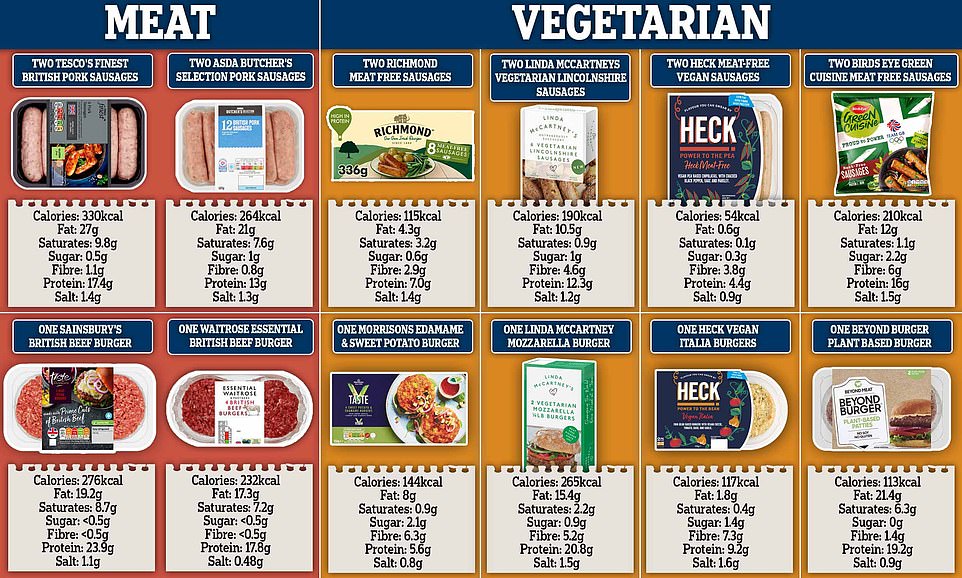 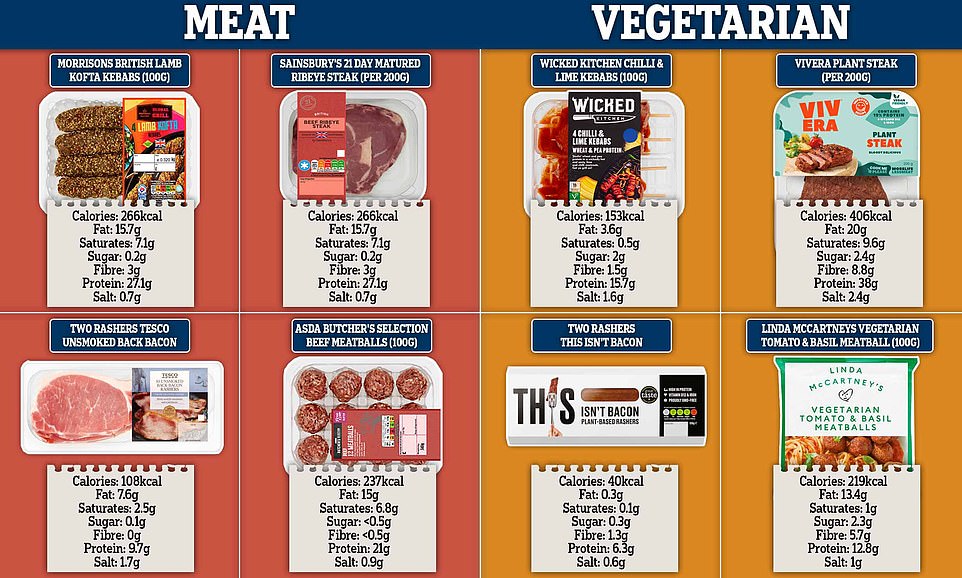 Meat and other animal products do not have to be removed from diets, the British Nutrition Foundation (BNF) said.

The BNF, a charity that advises on health eating, said it is ‘important to consider the essential nutrients’ that animal-derived products can provide.

It examined 29 studies over the last 10 years that examined how diets impacted health and the environment.

Vegetarian and vegan diets ‘can deliver environmental benefits’ but they are ‘unlikely to be widely adopted’ and may reduce intake of some essential nutrients found in meat, fish, milk and eggs, such as iron, zinc, calcium, iodine and vitamin B12, the BNF found.

Meat is a good source of protein, but health chiefs have advised that consumption of it should be moderate, due to links between cancer and red meat, such as beef and lamb, and processed meat, including sausages and bacon.

Cancer UK warns that chemicals found in the meat  — that are added during processing or produced when cooking — damage cells which can increase the risk of cancer.

These include haem, a red pigment naturally found in red meat that causes the body to produce harmful chemicals.

And chemicals produced when meat is cooked a high temperatures, called heterocyclic amines and polycyclic amines, can damage cells in the bowel.

But the findings published by the BNF today said evidence from the studies it looked into did not suggest a need to cut out meat or other products entirely to eat a healthier and more-sustainable diet.

Professor Judy Buttriss, director general of the British Nutrition Foundation and co-author of the review, said: ‘While the evidence-base on sustainable food systems has grown significantly in recent years, all too often nutritional quality and delivery of essential nutrients is not considered in judgements about the environmental impact of foods and diets.

‘It’s vital that nutrition is central in discussions about transformation of food systems so that we don’t risk encouraging dietary changes that might benefit the environment but could be detrimental to people’s health’.

Per 100g of vegetarian chilli and lime kebabs made by Wicked Kitchen, there is 2g of sugar, compared to just 0.2g for the same amount of Morrisons’ lamb kebabs.

For burgers, there is less than 0.5g of sugar in the meat options sold at Sainsbury’s and Waitrose.

But the vegetarian alternatives by Linda McCartney (0.9g), Heck (1.4g) and Morrisons (2.1g) have up to four times as much sugar.

Meanwhile, a plant-based steak by Vivera — which is sold at supermarkets including Sainsbury’s and Asda — has 2.4g of sugar per 200g, while a ribeye steak on offer at Sainsbury’s has less than 0.5g.

And Linda McCartney’s vegetarian meatballs (2.3g) have up to five times more than Asda’s beef meatballs (less than 0.5g).

Meanwhile, the amount of salt in some vegetarian foods was the same or six times higher in some veggie options.

Vivera’s plant steak has 2.4g of salt per 200g, while a ribeye steak of the same size sold at Sainsbury’s contains just 0.4g.

The Birds Eye vegan sausages, as well as Richmond’s vegetarian alternative, also contain just as much, if not more, salt than traditional options.

Two of Tesco’s pork sausages contain 1.4g of salt, while the same product at Asda contains 1.3g. But the Birds Eye option has 1.5g.

None of the BBQ food options alone came close to the NHS recommendations of eating less than 90g of sugar or 6g of salt per day.

Across the board, vegetarian options contained fewer calories and much less fat, including saturates, than meat options.

The exception was Beyond Burger’s plant-based patty, which had 21.4g of fat, compared to 19.2g in a Sainsbury’s beef burger.

And of all the veggie sausages, burgers, steak, bacon and meatballs MailOnline looked at had more fibre than the meat options.

Meat products generally had much more protein, but there were a few exceptions. Birds Eye’s meat-free sausages had 3g of extra protein than Asda’s pork sausages.

And per burger, Beyond Burger’s plant-based patty (19.2g) and Linda McCartney’s mozzarella burger (20.8g) had more protein than in a Waitrose beef burger (17.8g).

A spokesperson for THIS told MailOnline there is natural occurring sugar in their produce which is ‘minimal and from natural ingredients’ soy and pea protein and includes no added sweeteners or sugar.

Professor Gunter Kuhnle, an expert in nutrition and food science at the University of Reading told MailOnline: ‘I think one difficulty for many meat replacement products is that it is difficult to mimic the taste of the original product.

‘I assume this is one reason for introducing more salt or sugar.’

He said from a health point of view, a vegetarian product that has 10 times more sugar than a meat product ‘won’t matter too much for most people’ if the calories in the foods are similar.

‘Higher salt content could have an impact on blood pressure and cardio-vascular diseases risk — but only if it is really high and would get someone easily over the daily recommendation,’ he said.

Professor Kuhnle added: ‘In general, I think there is a problem in the perception of foods being ‘healthier’ just because they contain no meat.

‘Meat is neither healthy nor unhealthy. It’s just a type of food that can provide energy and some essential nutrients (especially vitamin B12 and iron), but more importantly, that’s enjoyed by many people.

‘As with most other foods, consuming too much can have an adverse effect on health — in the case of meat increased risk of cancer and potentially heart diseases.

‘The replacement has apparently more fibre and possibly also a better fat composition, which would make it ‘healthier’, but also more salt and sugar which would make it a bit unhealthier: one could argue that on balance, it probably won’t matter as long as it is consumed as a part of a balanced diet and consumers are aware of it.

‘I don’t think I would be very concerned by this as long as the consumers are aware that the meat alternatives have a different composition.

‘It would be good for producers to reduce salt and sugar content as far as possible — but this is sometimes more difficult than it seems as especially salt has a crucial role in food processing.’

Dr Giles Yeo, a principal research associate at Cambridge University’s Metabolic Research Lab, told the Telegraph: ‘You can be an unhealthy vegan, easily.

‘I think that’s probably true whether you’re having a Chicken McNugget or an [meatless] Impossible Burger.’

Nikki Joule, policy manager at Diabetes UK, told MailOnline: ‘Processed foods – whether vegetarian or not – often contain added salt and sugar, and so it’s important to be aware of the ingredients and read labels.

‘We encourage everyone to limit the amount of processed foods they eat, make meals from scratch as much as possible, and choose foods such as pulses, beans, nuts and plenty of vegetables.

‘In addition, food manufacturers should work with reformulation programmes – where the recipes of food and drink products are adjusted to make them healthier – to significantly reduce the sugar, salt and calorie content of the food we buy.

‘The UK government should consider further measures such as taxes, subsidies and penalties for non-compliance, to encourage reformulation among the food and drink industry.

‘This would help make everyday food and drink healthier and ensure that the healthy choice is the easy choice.’

Researchers at the University of Oxford revealed last month that for every 50g per day of processed red meat eaten each day — such as bacon, ham and sausages — the risk of coronary heart disease goes up by 18 per cent.

The Department of Health advises that we eat no more than 70g (cooked weight) of red and processed meat a day, which is the average daily consumption in the UK.