Home » Health News » Mapping the communications hub of the brain 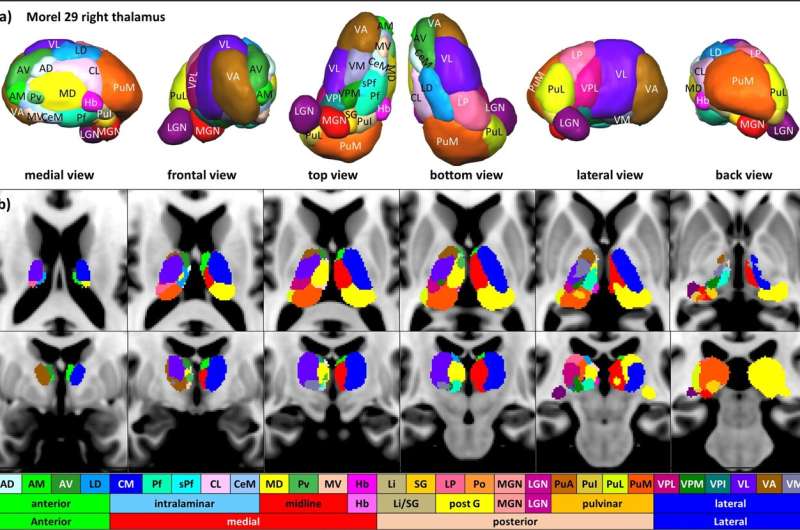 The thalamus acts as central communications hub for the brain, relaying information from the senses and other brain parts. Despite its importance, however, it is far from being fully understood.

Researchers of the Max Planck Institute for Biological Cybernetics in Tübingen have now explored the correlations of the thalamus with other parts of the brain. Their statistical analyses allow them to infer which mental tasks are associated with the different parts of the thalamus. The findings, now published in the journal Communications Biology, may help develop more targeted treatments for conditions such as Parkinson’s disease or epilepsy.

There is a region in the human brain that works like a hub airport: the thalamus, located deep inside our brains. It receives and distributes signals from the senses and from all over the brain. All visual and auditory input, for example, first arrives at the thalamus, which then sends it to the brain areas that process them—similar to passengers traveling to and from different cities who may have a layover at the same large airport. However, our understanding of which part of the thalamus is responsible for which function of the brain has hitherto been severely lacking.

A team of researchers from the Max Planck Institute for Biological Cybernetics has now taken steps to fill these gaps. They mapped the thalamus, determining for each of its subunits which purposes it can serve. Perhaps surprisingly, it turned out that many of the subunits of the thalamus share their tasks.

“We call this phenomenon functional multiplicity, and it can be compared to how a CPU works,” explains Vinod Kumar, lead author of the paper. “Whether you run a game or an office application on your computer, everything needs to be processed in the CPU—and the CPU doesn’t care what type of program you run, it allows computations of whichever application needs it at the moment.”

But there is more to the flexibility of the thalamus: it is also involved in higher brain functions. The bandwidth of these higher functions is quite large: from working memory to decision making and impulse control, the thalamus plays a role. These higher functions are typically associated with the cortex, the large layer of neural tissue that developed rather late in humans and other mammals.

“What we found about the relay nuclei of the visual thalamus, aligns with recent observations in the animal literature,” says Kumar. “However, it was remarkable to observe in humans.”

To get the results, the scientists statistically analyzed a total of 3.5 million brain scans of 730 subjects from the research database Human Connectome Project. These brain images were generated with functional magnetic resonance imaging (fMRI), a noninvasive method that indirectly visualizes neural activity by measuring the levels of oxygenated and deoxygenated blood.

Since active neurons need oxygen supply, this method allows to generate an image on which active brain regions light up while relatively inactive ones remain dark. Even when the scanned subject is at rest, these images allow to discern important connections in the brain show. The researchers complemented their analysis with data from 14,371 fMRI studies in which subjects were asked to carry out a task while their brains were being scanned.

This new understanding of how the thalamus works may in the future be relevant for many clinical applications. After all, damage to the thalamus can result in a variety of disorders such as sensory deficits, memory impairment, Parkinson’s disease, epilepsy, and hand tremor.

Even today, neurosurgeons already use a method called deep brain stimulation to treat such conditions: they electrically stimulate certain parts of the thalamus to alleviate, for example, Parkinson’s disease or drug-resistant epilepsy. Other potential clinical applications include transcranial direct-current stimulation and transcranial magnetic stimulation, non-invasive procedures used in the treatment of a variety of neurological and mental health disorders.

“Our new knowledge of the functional multiplicity in the thalamus nuclei gives an interpretation to such clinical disorders,” says Kumar. “We could better understand, for example, why a patient with Parkinson’s disease who is being treated with deep brain stimulation in the thalamus experiences certain side effects.” He hopes that this knowledge will help develop a more targeted approach for these interventions, making them more effective and reducing their side effects.