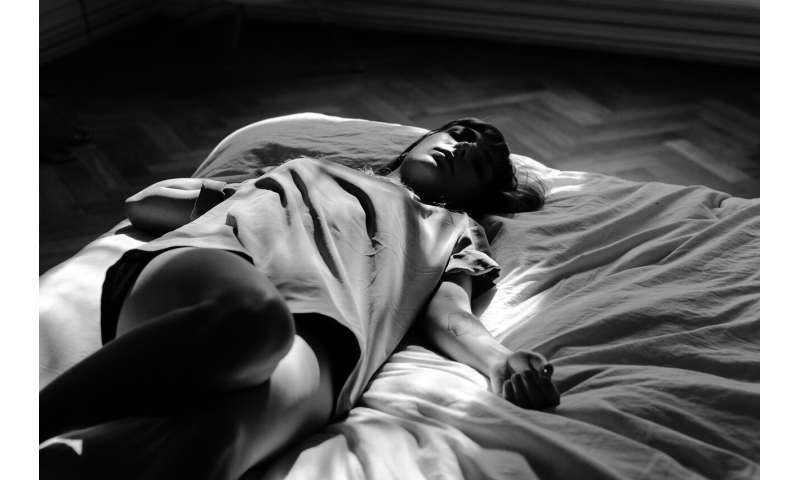 Sleep paralysis is a state involving paralysis of the skeletal muscles that occurs at the onset of sleep or just before waking. While temporarily immobilised, the individual is acutely aware of their surroundings. People who experience the phenomenon often report being terrorised by dangerous bedroom intruders, often reaching for supernatural explanations such as ghosts, demons and even alien abduction. Unsurprisingly, it can be a terrifying experience.

As many as one in five people experiences sleep paralysis, which may be triggered by sleep deprivation, and is more frequent in psychiatric conditions like post-traumatic stress disorder. It is also common in narcolepsy, a sleep disorder involving excessive daytime sleepiness and sudden loss of muscle control.

Despite the condition being known about for some time, to date there are no empirically-based treatments or published clinical trials for the condition.

Today, in the journal Frontiers in Neurology, a team of researchers report a pilot study of meditation-relaxation therapy involving 10 patients with narcolepsy, all of whom experience sleep paralysis.

The therapy teaches patients to follow four steps during an episode:

1.Reappraisal of the meaning of the attack—reminding themselves that the experience is common, benign, and temporary, and that the hallucinations are a typical by-product of dreaming

2.Psychological and emotional distancing—reminding themselves that there is no reason to be afraid or worried and that fear and worry will only make the episode worse

3.Inward focused-attention meditation—focusing their attention inward on an emotionally-involving, positive object (such as a memory of a loved one or event, a hymn/prayer, God)

4.Muscle relaxation—relaxing their muscles, avoiding controlling their breathing and under no circumstances attempting to move

Participants were instructed to keep a daily journal for four weeks to assess sleep paralysis occurrence, duration and emotions. Overall, among the 10 patients, two-thirds of cases (66%) reported hallucinations, often upon awakening from sleep (51%), and less frequently upon falling asleep (14%) as rated during the first four weeks.

After the four weeks, six participants completed mood/anxiety questionnaires and were taught the therapy techniques and instructed to rehearse these during ordinary wakefulness, twice a week for 15 min. The treatment lasted eight weeks.

In the first four weeks of the study, participants in the meditation-relaxation group experienced sleep paralysis on average 14 times over 11 days. The reported disturbance caused by their sleep paralysis hallucinations was 7.3 (rated on a ten-point scale with higher scores indicating greater severity).

In the final month of the therapy, the number of days with sleep paralysis fell to 5.5 (down 50%) and the total number of episodes fell to 6.5 (down 54%). There was also a notable tendency towards reductions in the disturbance caused by hallucinations with ratings dropping from 7.3 to 4.8.

A control group of four participants followed the same procedure, except participants engaged in deep breathing instead of the therapy—taking slow deep breaths, while repeatedly counting from one to ten.

In the control group, the number of days with sleep paralysis (4.3 per month at the start) was unchanged, as well as their total number of episodes (4.5 per month initially). The disturbance caused by hallucinations was likewise unchanged (rated 4 during the first four weeks).

“Although our study only involved a small number of patients, we can be cautiously optimistic of its success,” said Dr. Jalal. “Meditation-relaxation therapy led to a dramatic fall in the number of times patients experienced sleep paralysis, and when they did, they tended to find the notoriously terrorising hallucinations less disturbing. Experiencing less of something as disturbing as sleep paralysis is a step in the right direction.”

If the researchers are able to replicate their findings in a larger number of people—including those from the general population, not affected by narcolepsy—then this could offer a relatively simple treatment that could be delivered online or via a smartphone to help patients cope with the condition.