Home » Health News » MICHAEL MOSLEY: Why I went a bit wild after my Covid jab

Why I went a bit wild after my Covid jab: DR MICHAEL MOSLEY says he forgot the rules in his excitement… but whatever you do, don’t be put off by the vaccine myths – they’re not true

One of the advantages of being over 60 is that I recently got a Covid jab (AstraZeneca, as it happens).

It was all incredibly easy and apart from the brief sting of the injection, I had no side-effects — except cockiness.

The morning after my vaccine, feeling bright and cheerful, I went along to the supermarket and reached across a fellow shopper to grab a can of tomatoes. 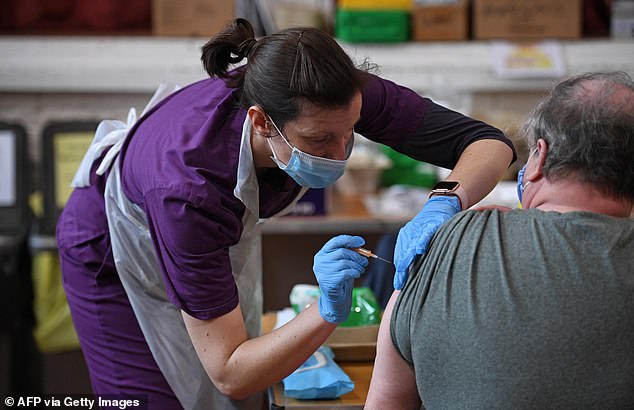 It’s vital we get transmission rates down and achieve ‘herd immunity’ quickly, not just to return to normal life, but because this gives new mutations less chance to take hold. Pictured: A vaccine being given

I was wearing a mask, but not surprisingly he angrily shouted, ‘Oi! Two metres’, before recognising me from the TV and saying sternly, ‘You should know better’.

He was right, I was too close and I hadn’t even noticed what I was doing. Perhaps I did it because, unconsciously, I was now convinced I was immune.

This is called risk compensation behaviour — you become more careless when you feel better protected. Another example is cyclists who ride their bikes less cautiously when wearing helmets because they feel safer.

This could become quite a common problem as the vaccine programme rolls out. In a survey last December, 40 per cent of people said they’d be less likely to follow lockdown rules after being vaccinated and many thought they’d be protected immediately after the first jab.

Indeed, new figures show that four in ten of the over-80s met indoors with someone outside their bubble within three weeks of their first jab. 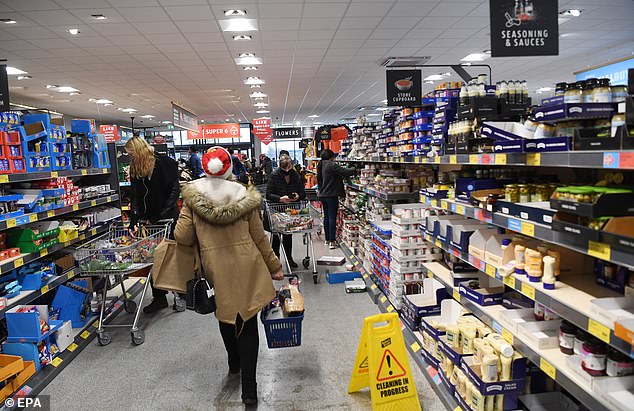 The good news is that we Brits are now among the world’s most enthusiastic embracers of the Covid vaccine; a survey by Imperial College London and YouGov found that almost 80 per cent say we’ll have it

But in fact it can take at least a week to start ramping up an adequate antibody response and you don’t get full protection until after your second jab.

I don’t get my second jab until late May, by which time, hopefully, we’ll be just weeks away from the end of lockdown. Though that depends, among other things, on enough of us being vaccinated to keep the virus at bay.

It’s vital we get transmission rates down and achieve ‘herd immunity’ quickly, not just to return to normal life, but because this gives new mutations less chance to take hold.

The good news is that we Brits are now among the world’s most enthusiastic embracers of the Covid vaccine; a survey by Imperial College London and YouGov found that almost 80 per cent say we’ll have it — far higher than countries such as France, where just 40 per cent say they’ll get it, with 33 per cent indicating they definitely won’t.

For the 20 per cent in the UK who aren’t sure, here are some of the common myths I’ve come across — and why I think you shouldn’t be worried . . .

Myth 1: The vaccine will give you Covid

Some vaccines, such as the one for chickenpox, use live but weakened viruses to stimulate your immune system.

But neither the Pfizer nor AstraZeneca vaccines use whole viruses — instead they use genetic material which, once it gets into your cells, makes them churn out versions of the virus’s spikes. Feeling a bit ropey after your jab is a sign your immune system is ramping up, but there’s no chance the vaccine will give you Covid.

Myth 2: The vaccine will alter your DNA

Although the two vaccines being used in the UK are based on injecting genetic material, none of this genetic material goes into the heart of the cell, the nucleus, where your DNA sits.

It’s a bit like a factory, where the precious blueprints are kept in a safe, but where the owners are happy to let visitors into the factory to borrow some equipment.

Myth 3: The vaccine will make you sterile

This fear, which has no basis in science, seems to have been fanned by a recent mini-series called Utopia, where a mad scientist creates a flu-like illness as an excuse to give people a vaccine that then will make them sterile.

In a recent Pfizer trial, involving more than 37,000 people, the women taking part were advised not to get pregnant. Nonetheless, 23 women conceived, probably by accident — 12 of them were in the vaccine group, 11 were in the placebo group.

Covid vaccines will not affect your ability to reproduce. 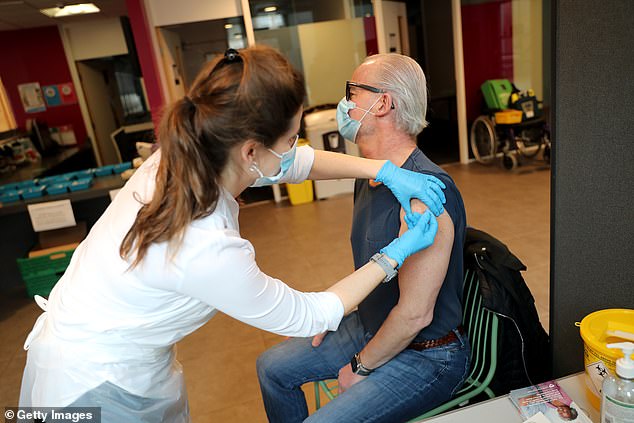 Although the two vaccines being used in the UK are based on injecting genetic material, none of this genetic material goes into the heart of the cell, the nucleus, where your DNA sits

It’s true that if you’re under 60 and don’t have pre-existing diseases then you’re very unlikely to die from Covid if you get it.

But you can still then infect others, who might be far more vulnerable. And if you get infected, there is a risk of organ damage — a study by researchers from University College London, who tracked 200 middle-aged Covid patients, found that four months after being infected, a third still had signs of damage to their heart or lungs — despite only 18 per cent of the group being ill enough to be hospitalised. There’s also the risk of long Covid and symptoms such as fatigue, brain fog and depression.

Myth 5: The jabs were developed too quickly

I’ve been following the race to develop a Covid vaccine for over a year, and what the scientists did in that time is incredible.

But the reason they produced the vaccines so rapidly is not because they cut corners, but because of earlier work done on vaccines against other coronaviruses such as SARS.

It’s also been a huge international effort. Once the vaccines had been tested in animals, and declared safe, tens of thousands of people around the world agreed to take part in early trials, overseen by independent experts.

So far more than 300 million doses have been given worldwide, with remarkably few side-effects.

That’s why I think the vaccines are safe and effective. But do remember that it takes two jabs to be properly protected — and try to maintain social distance rules, particularly in supermarkets!

Hit the dancefloor to keep body AND brain in shape!

One of the things I plan to do when the restrictions are eased is to sign up for Zumba classes with my wife, Clare. I’m not a great dancer but it looks fun and you can burn quite a few calories (around 340 per half hour).

There’s also mounting evidence that vigorous dancing is a great way to keep your brain in shape.

A few years ago I teamed up with researchers from Coventry University to look at the impact of salsa (the Latin dance, not the sauce) on the brain. 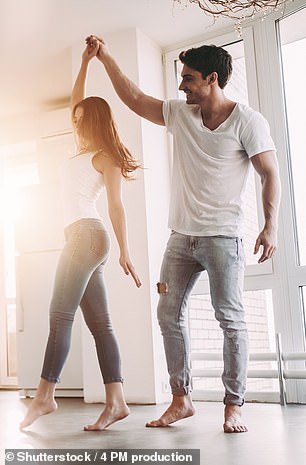 We put 27 amateur dancers through a range of cognitive tests before a vigorous salsa session. When they were tested again afterwards we saw improvements in many areas of brain function, including visual spatial working memory

We put 27 amateur dancers through a range of cognitive tests before a vigorous salsa session.

When they were tested again afterwards we saw improvements in many areas of brain function, including visual spatial working memory (which you use for navigating familiar locations, for instance).

In a more recent long-term study, researchers from the Centre for Neurodegenerative Diseases in Magdeburg, Germany, asked volunteers in their 60s to take up dancing, once a week, for 18 months, or do a more traditional workout.

Brain scans showed that both groups experienced an increase in the size of the hippocampus, an area that plays a key role in memory and learning — but this change was more pronounced in the dancing group.

The researchers suggested this is not only because they were getting their hearts pumping, but they were also having to learn new dance routines, which is challenging for the brain, in a good way.

If you’re ever asked, ‘would you like your sandwich heated up’, you should answer, ‘hell, yeah’, particularly if you’re watching your weight.

That was the conclusion of a study in the journal Appetite by researchers from Rutgers University-Camden. For two weeks they hung around a New York café, noting people who bought cold sandwiches were twice as likely to also buy potato chips or cookies than those buying hot sandwiches.

This is probably because people expect cold food to be less enjoyable, so they stock up on something else.

Or as Maureen Morrin, a professor of marketing at Rutgers, put it, ‘serving temperature of food and beverages impacts aroma and flavour intensity’.

She adds that if you’re concerned about calorie intake, ‘choose hot foods and beverages rather than cold’.