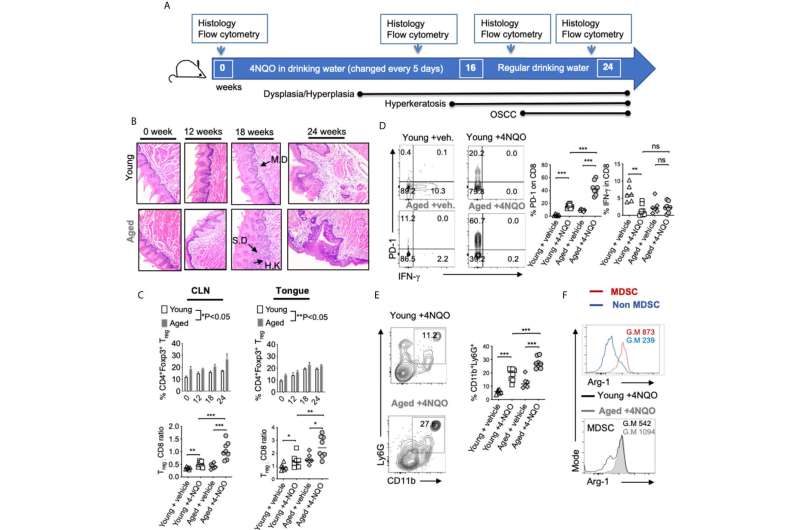 Microscopic fungus may have more to do with oral cancer and aging than first thought, according to new research from Case Western Reserve University.

Researchers from the School of Dental Medicine, Case Comprehensive Cancer Center and School of Medicine are hoping a new study could lead to a medical breakthrough in understanding certain types of oral cancer.

Pushpa Pandiyan, an associate professor of biological sciences at the dental school, led a team of local researchers studying the function of specific T cells, known as Tregs, during the development of oral cancer in aging mucosa, the moist inner lining of some organs and body cavities, such as the nose, mouth and lungs.

“We think this is the beginning of something important and monumental,” she said.

Their findings recently appeared in Frontiers in Oncology.

Pandiyan and the researchers examined the role of dectin-1—a cell’s pattern-recognition and immune receptor—and its ability to trigger an inflammatory response that resists fungal infection. Dectin-1 is among the fungi receptors that expresses on a host cell.

“What we’re finding now is that the dectin-1 receptor, usually responsible for anti-fungal immunity, is now responsible for accumulation of these cells at excessive levels in tumors,” she said.

Researchers point out that the culprit is likely the result of immune cells somehow overreacting to fungal microbiota. Although dectin in normal levels serves as a protective measure, Pushpa said excessive amounts can promote tumor growth “because of its ability to recruit immunosuppressive cells.”

“Accumulation of these cells were much worse during aging,” Pandiyan said, adding that the findings may relate to aging. “Our bodies produce more dectin-1 the older that we get. In other words, anti-tumor defense mechanisms are weakened with age.”

While the research was limited to studying aging oral mucosa, Pandiyan said the findings may have broader implications for additional cancer research.