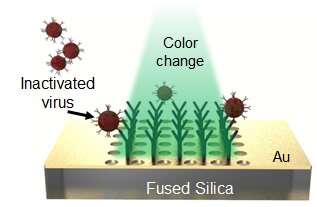 GW’s Technology Commercialization Office (TCO) awarded a $50,000 COVID-19 Technology Maturation Grant to the team, led by Mona Zaghloul and Yangyang Zhao of the School of Engineering and Applied Science and Jeanne Jordan of the Milken Institute School of Public Health.

Dr. Zaghloul, a professor of electrical and computer engineering, and Dr. Zhao, her former postdoctoral student, originally developed the device with the National Institute of Standards and Technology to detect and distinguish different species of gas. The device, to which GW holds the patent, is as small as a strand of hair and covered in a thin layer of gold. Once the gold surface binds with other molecules, like those of a gas, the wavelength of light bouncing off the surface changes, creating a different-colored light. Different gasses should therefore cause different shifts in light, which artificial intelligence programs could track and learn from.

Dr. Jordan joined Drs. Zaghloul and Zhao as the pandemic developed and the potential public health applications of their device became clear. She recommended that the sensor be calibrated directly to test viral infection, rather than the antibodies that may be present in a person’s bloodstream after infection.

The device’s surface could be coated with a reagent, or a solution containing proteins that bind specifically to the SARS-CoV-2 virus that causes COVID-19. When an infected person’s sample is applied, the virus would bind to the surface, causing an optical change that could immediately be sensed by phone cameras.

“These are devices that a public health professional could go out with into the field to administer point-of-care testing, either at a walk-up center or directly in the community,” Dr. Jordan said. “They’re extremely rapid—the turnaround time to having test results is within minutes, and you do the testing right there instead of sending your sample to a large commercial laboratory with a massive backlog. That would allow these professionals to say immediately if someone needs to be quarantined, and to get the names of their contacts so they can start contact tracing.”

The grant from the TCO will allow the researchers to purchase a commercially available reagent and samples of the non-infectious inactivated virus. But their path to the marketplace could still be arduous.

First, the team will need to make sure that binding between the reagents applied to the device and the virus actually occurs and is detectable. Then they’ll have to determine how few virus particles can be detected using the device. They also need to determine whether the device binds other common human coronaviruses that causes mild colds in infected individuals, for instance—and if it does, will the change in reflected light be distinguishable from the change that occurs when sensing SARS-CoV-2 binding?

The questions are complicated by the fact that the laboratory team will consist not only of virologists but of engineers and engineering postdoctoral students, all of whom have to be trained to handle deactivated pathogens.

Still, Dr. Zaghloul and her team are excited about the possibilities, particularly as another example of impactful collaboration across the schools of engineering and public health.