Cancer survival rates could reverse because a lack of ‘serious effort’ to deal with the NHS workforce crisis, a scathing report warned today.

Cancers are harder to cure or treat when they are spotted late.

The committee’s report on cancer services warned that there is no detailed plan to address shortages of clinical oncologists, consultant pathologists, radiologists and specialist cancer nurses.

And delayed treatments and a reluctance to have symptoms checked because of the pandemic will mean many lives will now end ‘prematurely’, they said.

‘Vital’ cancer surgeries were cancelled during the latest wave, suggesting the NHS is still unable to access ‘sufficient’ Covid-free capacity to both safeguard and fight the backlog, the report added.

It comes just over a month after Sajid Javid declared a ‘national war on cancer’, in an attempt to improve Britain’s survival rate for the disease.

His disease-fighting proposals include a series of ‘walk-in’ MRI screening services in places like shopping centres and football grounds to speed up diagnoses.

At the time of his pledge, the Health Secretary refused to promise any new cash to tackle workforce shortages. 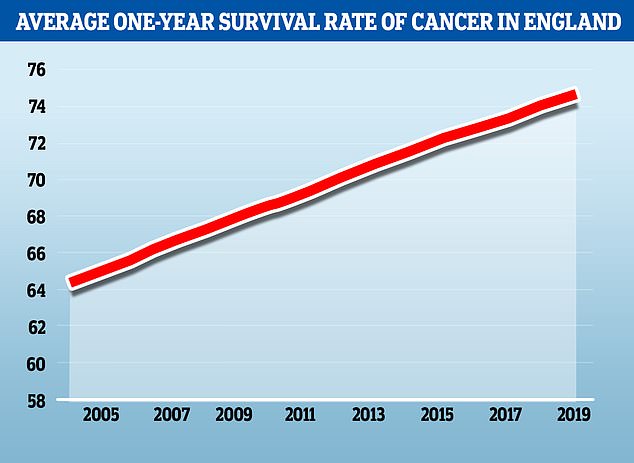 Cancer survival rates could go into reverse because a lack of ‘serious effort’ to deal with the NHS workforce, a scathing MP report warned today. NHS Digital data released last Thursday shows survival rates for cancer have been increasing in England significantly from 2004 to 2019. The average one-year survival for all cancers jumped from 64.4 per cent to 74.6 per cent within that 15-year time frame 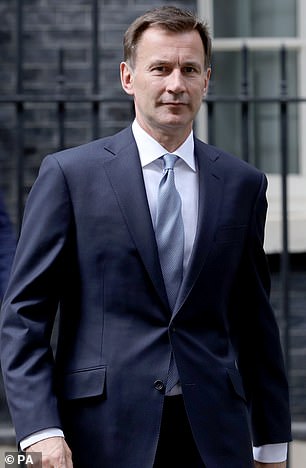 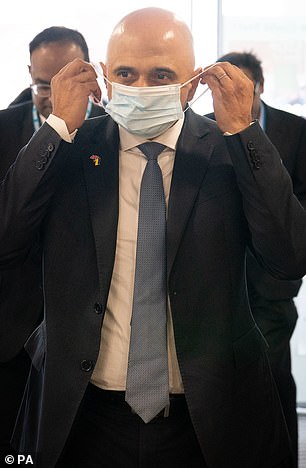 A report by the Health and Social Care Committee, chaired by former health secretary Jeremy Hunt (left) warned that NHS staffing shortfalls are ‘jeopardising’ progress on diagnosing more cancers earlier — making them harder to cure or treat. Its findings come just over a month after Sajid Javid (right) declared a ‘national war on cancer’ in a bid to improve Britain’s survival rate for the disease

Britain is making ‘inadequate’ progress towards its fight to improve cancer services, a damning report by MPs concluded.

Experts advising the Health and Social Care Committee examined pledges that the Government had made to improve cancer outcomes for patients.

They ruled the Government is failing to meet its targets to boost the NHS workforce, speed up diagnoses and give all patients access to personalised care.

Staffing issues were underpinning a lack of progress towards the vital goals, which include diagnosing patients who have been referred within 28 days.

NHS Digital figures released last Thursday shows cancer survival rates have been on the rise in England from 2004 to 2019.

The average one-year survival for all cancers jumped from 64.4 per cent to 74.6 per cent within that 15-year time frame.

The MP-led report says these consistent increases could reverse course because of the crisis in staffing.

It estimated the NHS is currently short of 189 clinical oncologists, 390 consultant pathologists and 1,939 radiologists, and will be short of 3,371 specialist cancer nurses by 2030.

‘However, progress is being jeopardised by staff shortages which threaten both diagnosis and treatment.

‘We do not believe that the NHS is on track to meet the Government’s target on early cancer diagnosis by 2028.

‘We are further concerned at the damaging and prolonged impact of the pandemic on cancer services with a real risk that gains made in cancer survival will go into reverse.’

He added: ‘A mother told us of her 27-year-old daughter’s five-month struggle to get a diagnosis of cancer — tragically she died three weeks after it came.

‘That is why we are calling on the Government and the NHS to act now to address gaps in the cancer workforce upon which success depends. To date we have found little evidence of a serious effort to do so.’

The report states that despite NHS efforts to protect cancer services during Covid, 36,000 fewer people in England began treatment compared to previous years.

And 3million fewer people in the UK were invited for screening between March and September 2020.

‘The effect of reluctance to come forward, late diagnosis and delayed treatment will almost certainly mean that many lives will end prematurely,’ the MPs warned.

Witnesses told MPs that they had to ‘ration treatment’ and likened working in cancer services during the pandemic to ‘working 25 years ago’. 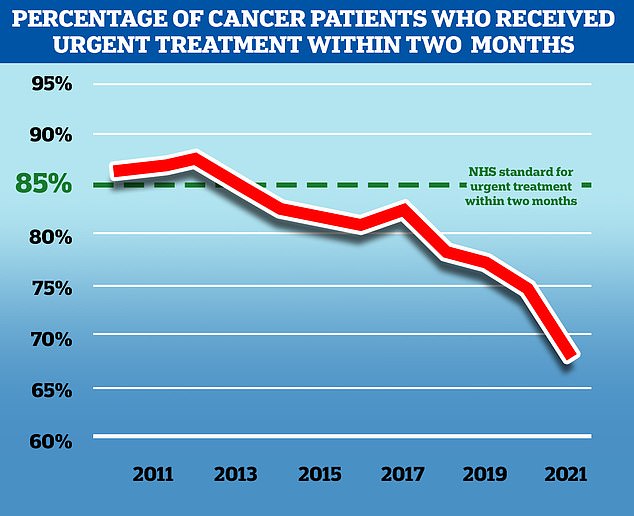 The performance of the NHS’s current cancer referral targets have declined in the past decade with the number of cancer patients who received urgent treatment within two months falling to 67 per cent last year, the target is 85 per cent

MPs also highlighted that thanks to pressures on GPs, family doctors may not spot as many potential cancer cases.

They said that urgent cancer referrals have begun to recover but key waiting time targets are being missed which risk ‘greater numbers of late diagnoses’.

They add: ‘Disappointingly, even the recent Omicron wave of Covid has seen more cancellations of vital cancer treatments indicating the NHS is still not able to access sufficient Covid-free treatment capacity to safeguard treatments and address the backlog.

‘Without significant additional efforts, we conclude there is a real risk that the gains in cancer survival will reverse.’

The MPs said that the single best way to improve cancer survival rates would be to diagnose more cancers at an earlier stage but achieving ambitions to improve early detection rates will be difficult without sufficient staffing.

‘Neither earlier diagnosis nor additional prompt cancer treatment will be possible without addressing gaps in the cancer workforce and we found little evidence of a serious effort to do this,’ they wrote.

They warned that without proper workforce planning, the NHS will not achieve its ambition of diagnosing 75 per cent of cancers at an early stage by 2028.

A report by the same group last week ruled Britain is making inadequate progress on its cancer targets.

They said the Government is failing to meet its targets to boost the NHS workforce, speed up diagnoses and give all patients access to personalised care.

Staffing issues were underpinning a lack of progress towards the vital goals, which include diagnosing patients who have been referred within 28 days.

The Government aims to diagnose 75 per cent of all cancers at Stage one or two by 2028.