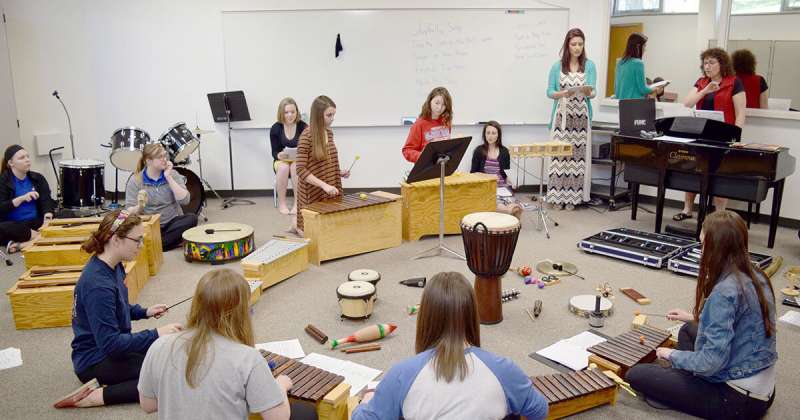 The principles of a music education approach for children show promise when used as the basis for music therapy with adult cancer patients.

That is the conclusion of a feasibility study co-written by Cindy Colwell, University of Kansas professor of music, and Jennifer Fiore, a KU alumna and current faculty member at Western Michigan University, and published online this fall in the Journal of Music Therapy.

It’s one of two papers Colwell published online in 2020 that focus on adapting for therapeutic settings the music education system developed by German composer Carl Orff. It’s known today as Orff Schulwerk (schooling), or simply the Orff approach. Among other things, it involves playing borduns and repeated patterns (ostinato) on simple barred percussion (such as xylophones) or other classroom percussion instruments and improvising on top of those musical beds.

The first paper Colwell wrote in 2020 laid out the results of a survey of music therapy students, clinicians and educators, gauging their level of knowledge of and training in the Orff approach. Orff Schulwerk may be less familiar to some than the music education methods promulgated by Orff’s fellow 20th century European composer Zoltan Kodaly, but it is widely used in elementary general music classrooms in many schools across the country. That article was published in Approaches: An Interdisciplinary Journal of Music Therapy.

Colwell said she began as a Kodalyist but became “really enamored of the Orff approach” and its focus on creativity and improvisation while pursuing her doctorate.

Colwell, who holds the three levels of Orff certification and recently completed her Orff Master Class, said the chant that formed the basis of the intervention used in this feasibility study was envisioned while discussing creative options with one of her graduate students, Elisha Madsen, who was enrolled in an advanced practicum at the time. It was while Madsen and Colwell were driving from Lawrence to the University of Kansas Cancer Center in suburban Kansas City one day that Colwell conceived the chant that she and Fiore used in the study.

“Elisha was just a phenomenal musician and was very successful at what she was doing, but we kind of hit a ceiling,” Colwell said. “So we started talking about how to think differently with this population. … I said, “Let’s go for it.” I pulled over to the side of the road, she got into the driver’s seat, I got into the passenger seat, and I wrote a music-based Orff intervention on the way over, and that’s what’s in the paper. We tried it clinically for a while—not as part of any research—to see if this is something … that the patients are engaged enough to participate in it for us to address their treatment outcomes.”

The intervention was further developed and refined by Colwell and Fiore, who used it clinically for two years. It falls under the recreative and creative methods of music therapy and is supported by some initial research using Orff in diverse settings and based on initial work of Gertrud Orff, who developed Orff Music Therapy in Germany.

Once Colwell and Fiore got approval to conduct the research study, they asked 45 cancer patients to take part in either a “traditional” music therapy session—typically selecting a song of their choice from a list provided (and accompanied on guitar) by the therapist and being encouraged to sing or just listen—or in a session (see related video, below right) based on the Orff approach. In the latter, the therapists provided prompts in the form of simple sentences with blanks left for the patient to fill in feelings related to their own cancer experience to create their chant. The patients then accompanied themselves using simple instruments, together with the therapist. The two forms of therapy included verbal processing of emotions that were elicited by the music-based interventions, and both were compared to a control group that got neither type and instead participated in standard care for someone in outpatient oncology.

“Basically,” Colwell said of the chant, “it goes, “A cancer diagnosis made me feel – (blank).” … And then “The greatest fear I had was … (blank).” So part of our job as a clinician is to take what they’ve said and make it fit musically, rhythmically, to keep the beat going. … And once we have that sort of core, we then layer parts on it, and we can make it as complex as we need to. So, for example, if I’m working with somebody with cognitive challenges, I can make it very simplistic to where they’re able to be successful. And then I can challenge them and push them … but you don’t want to constantly be frustrating your clients. Whereas if I’m working at the Douglas County Juvenile Detention Center with Orff, there I am going to push them and challenge them. Because part of what we do with those kids is help them learn how to solve problems, how to communicate more appropriately and more effectively.”

The goal of music therapy in cancer care, Colwell said, is to help the patient express their feelings and perhaps achieve some sense of well-being.

“A huge part of this is helping them process the emotions that were expressed in the chant. Music stimulates the emotions,” Colwell said. “This opportunity to express and process emotions may have an effect on various cancer-related symptoms.”

Colwell and Fiore examined patients’ self-report of four cancer-related symptoms—pain, fatigue, anxiety and mood—before and after the sessions, and they found at least enough evidence of feasibility of the interventions and differential improvement in fatigue and anxiety to justify a further study informed by the outcomes and limitations of the first.