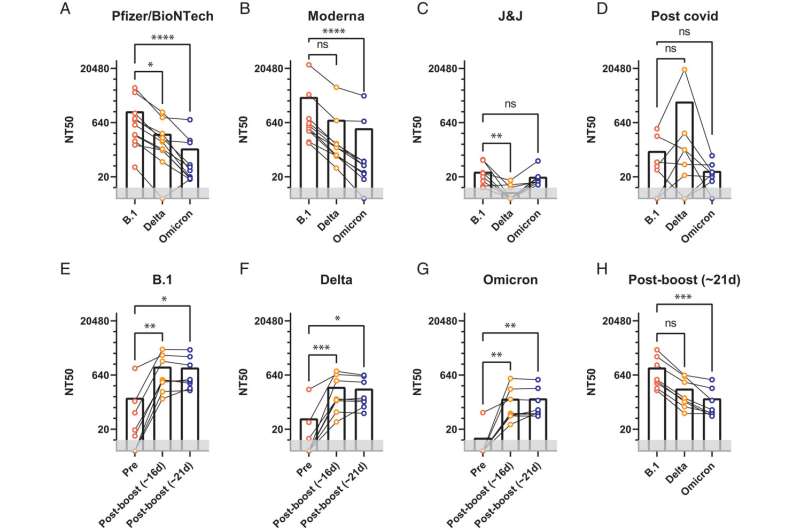 A team of researchers with members from the Gladstone Institute and Curative Inc. has uncovered new attributes of the SARS-CoV-2 omicron variant that could explain why it is so much more transmissible than other variants of the virus. In their study, published in Proceedings of the National Academy of Sciences, the group used virus-like particles (VLPs) to study the assembly and neutralization capabilities of the omicron variant.

As the pandemic has worn on, scientists discovered that, as expected, the SARS-CoV-2 virus has mutated into several variants. Prior research has suggested that some of the variants make people sicker than others and also that some of the variants are more transmissible—they infect people more easily, allowing more people to become infected in a shorter amount of time. One such variant, omicron, was found to be particularly transmissible, and in this new effort the researchers aim to know why.

To learn more about the unique transmissibility features of the omicron variant, the researchers studied VLPs instead of the virus itself due to safety concerns. In their study, they analyzed attributes of four VLP models of four notable SARS-CoV-2 variants: omicron, delta, B.1.1 and B.1. All were tested against antisera samples obtained from infected patients. They found that antisera from patients was approximately 15 times less effective against omicron as B.1, the original strain, even though the neutralizing effect of two vaccines increased. And in taking a closer look at the N mutation that makes omicron different from other strains, the researchers found it allowed the virus to enter host cells more easily and also gave it a four-and-a-half-fold higher assembly. They suggest that omicron is more transmissible due to several factors—its efficient assembly, its cell entry efficiency and its antibody-neutralizing abilities.