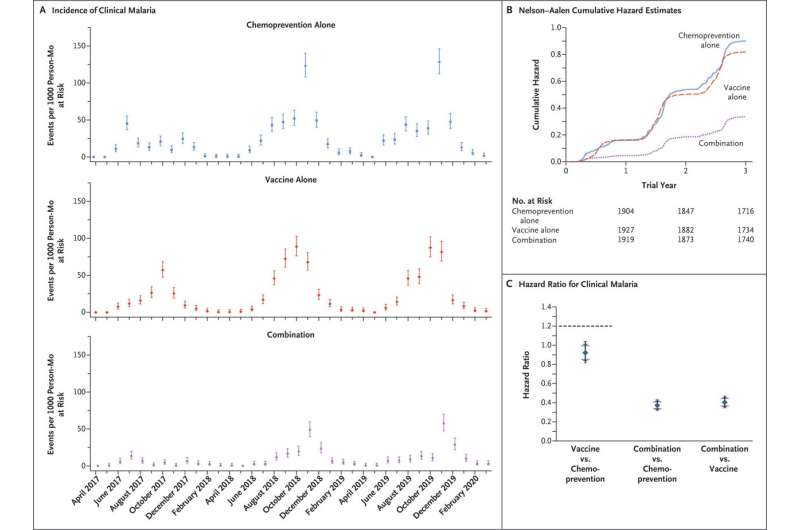 In early October, the World Health Organization endorsed widespread use of the first-ever vaccine against malaria, a parasitic disease transmitted by the bite of an infective female Anopheles mosquito and a major cause of illness and death in sub-Saharan Africa. While rare in the developed world, malaria kills more than 400,000 people annually, the majority of them children in sub-Saharan Africa. The new vaccine, RTS,S—or Mosquirix—manufactured by GlaxoSmithKline, targets the infective stage of Plasmodium falciparum, the deadliest of five malaria strains, and the one responsible for the vast majority of deaths due to malaria. This achievement is the product of 30 years of research and development, and is not only the first against malaria, but the first for any human parasitic disease.

WHO recommends that children 5 months and older receive the vaccine in a four-dose schedule. The vaccine has about a 50% efficacy rate during the first year, falling to almost zero by the fourth year after vaccination. Nevertheless, public health officials see it as an advance that will have an impact in curbing the hundreds of thousands of childhood illnesses and deaths caused by this parasite. To learn more about the global implications of this new, first-generation malaria vaccine, the Hub spoke to Photini Sinnis, professor of molecular microbiology and immunology at the Johns Hopkins University School of Medicine, and of biochemistry and molecular biology at the Johns Hopkins Bloomberg School of Public Health. She also is a deputy director of the Johns Hopkins Malaria Research Institute.

How dangerous is malaria?

If you are not immune, which includes children in endemic areas, travelers, and the military, malaria can cause severe disease, resulting in death about 10% to 20% of the time if not quickly identified and treated. Importantly, immunity requires sustained, multiple exposures meaning that you can get it again. Children often get it two or three times during a transmission season over the course of many years until they’ve built sufficient immunity to protect them from clinical disease.

Why did it take so long to develop a malaria vaccine?

Many drugs and vaccines take a long time to come to market, but this took even longer for a few reasons. There were some safety concerns after the Phase III trial due to a very small increase in the incidence of bacterial meningitis in vaccinated children, and there was concern about the feasibility of rolling out the vaccine in sub-Saharan Africa while still preserving other important approaches, such as the use of insecticide-treated bed nets and rapid diagnostic tests followed by treatment. For these reasons, additional pilot studies were conducted in Ghana, Kenya, and Malawi, where the vaccine was studied in large geographic areas. Data from these pilot studies demonstrated the safety of the vaccine and the feasibility of administering it as part of the routine childhood immunization schedule.

This isn’t just a first for malaria, but for any human parasitic disease. What does it mean for the development of vaccines for other illnesses caused by parasites?

Parasites are complex organisms, and the majority have had a long history with humans, meaning that they are highly adapted to living in us. Each specific parasite is unique in this way and their interaction with the human immune system needs to be understood in order to make an effective vaccine. With viruses, you can sometimes use similar platforms, but parasitic diseases are more complicated, and each may require an individualized approach.

How does the vaccine work?

It induces antibodies to the major surface protein of the sporozoite—that is, the infectious stage of the malaria parasite transmitted by the mosquito’s bite—using a piece of that protein made into a particle by fusing it to the surface antigen of the hepatitis B virus. The particles are created because they are better than the protein alone at provoking an immune response. This is administered in combination with an adjuvant—or immune booster—which is key, and which enhances the production of antibodies.

The vaccine’s efficacy rate was 50% the first year, dropping to nearly zero by the fourth year. Will that mean the need for repeated boosters? Is 50% good enough?

What it means is that it’s as good as we’ve ever done for a parasitic infection—but it’s not good enough. We need to continue working. The current schedule calls for three doses before the transmission season, then a booster before the next one. It wouldn’t surprise me if we will need a booster before every transmission season. When you have 400,000 kids dying every year, then 50% is meaningful. But we can do better.

A trial of the vaccine given with preventive drugs was much more effective than just the vaccine alone. Should this be the preferred strategy?

Yes. The researchers gave a course of vaccine before the rainy season and then three spaced doses of two drugs—sulphadoxine-pyrimethamine plus amodiaquine—during the rainy season. They had between 60% and 70% lower incidence of uncomplicated malaria, severe malaria, and death compared to either intervention alone, which is clearly the approach we need to be taking.

Does it require refrigeration—that is, will it be easily distributed? How much does it cost? Who will be funding the costs?

The adjuvant requires refrigeration, which is doable. The vaccine costs about $5 a dose, which can be expensive in low-income countries, but with support from the vaccine alliance Gavi, and the Bill & Melinda Gates Foundation, hopefully cost won’t be a problem.

How soon will it be available?

By the end of 2022 or the beginning of 2023, it should be rolled out in a meaningful way in sub-Saharan Africa.

Does this advance give us hope that the disease will be eradicated at some point in the near future? To be sure, its efficacy is modest; nevertheless it is a major first step. Will this make subsequent steps easier and faster?

I don’t think we will eradicate malaria with this vaccine, but it will make a difference in childhood morbidity and mortality, which is important. It’s possible that the combination of the vaccine and intermittent drug therapy, as outlined above, could decrease transmission significantly in certain areas. However, additional modalities, such as vaccines targeting other parasite stages or novel mosquito interventions, could combine with this vaccine to have much greater impact.

How will this change day-day-day life for people living in areas where the disease is prevalent/endemic?

People should not stop using other transmission–blocking modalities. They should still sleep under bed nets, for example. But fewer children will become seriously ill and fewer children will die and that is important. It also means more children will survive childhood and fewer of them will suffer the long-term consequences of malaria, such as neurological complications and severe anemia, which can increase death from other causes.

Why should Americans, who probably don’t think about the dangers of malaria since it is so rare here, care about this development? And what will it mean in the global fight against the disease?