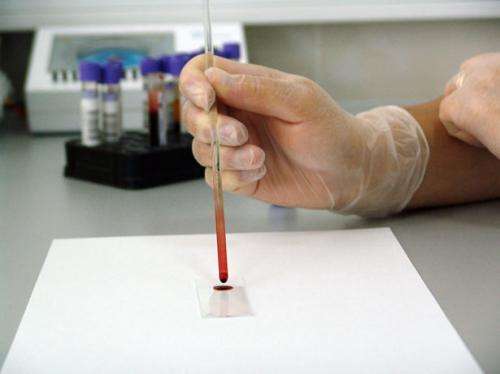 A new mutation was identified in 9 percent of relapsed cases of pediatric acute myeloid leukemia (AML) that may define a new subtype of the disease. While the researchers identified the mutation in samples of relapsed AML, they found that, in many cases, the mutation was present in primary samples as well, and it was mutually exclusive with other subtype-defining AML mutations.

The mutation is a tandem duplication (a series of adjacent repeats of a DNA sequence) of exon 13 of the gene UBTF, which normally promotes expression of the cell’s protein translation machinery.

AML is a relatively rare form of blood cancer that affects both children and adults. While researchers have identified several AML driver mutations that physicians use to stratify patients’ risk and help guide treatment decisions, much of this research has been performed on primary cancers. Klco and colleagues wanted to instead investigate relapsed AML to identify mutations that may drive recurrence.

“It started as a simple goal of trying to understand how mutations that we saw in relapsed cases differed from known mutations at initial diagnosis,” Klco said. “That was something that had not been extensively done for pediatric AML.”

How the study was conducted:

Klco and colleagues performed whole-genome sequencing, whole-exome sequencing, target capture sequencing, and RNA sequencing on a cohort of 136 samples of relapsed AML. They validated their results using an expansion cohort of transcriptional data from an additional 417 cases.

They identified known drivers of AML, such as fusions involving KMT2A and NUP98, as well as several rare mutations enriched in relapsed cases. The researchers were particularly interested in UBTF tandem duplications because they had only rarely been observed in myeloid cancers and because they were found in 9 percent of patients—a relatively high proportion.

“Many classical cancer driver genes have hotspot mutations,” Ma said. “Because the duplication we observed is in almost exactly the same spot in UBTF with such a high recurrence, we thought it has to be functional in some way.”

In their expansion cohort, the researchers found that UBTF tandem duplications are not found alongside mutations that define common or rare AML subtypes. They do, however, frequently coincide with mutations in FLT3 and WT1, two commonly mutated genes in AML that are sometimes found in the absence of subtype-defining drivers, but that aren’t believed to drive oncogenic transformation themselves. UBTF tandem duplications were found in all samples with WT1 and FLT3 mutations that had no other driver mutation identified.

These data suggested that UBTF tandem duplications may be the driver event in such cases, but for that to be true, the duplications must be present at the onset of cancer development and should therefore be observed in primary cancers. The researchers identified four patients in the expansion cohort with matched primary and recurrent samples, and whose recurrent samples had a UBTF duplication. In all four cases, the UBTF tandem duplication was present in the primary sample.

“Proving it’s a functional driver will definitely take some time,” Ma said, “but we really think that will be the case.”

In the meantime, Klco and Ma believe UBTF tandem duplications can still be useful for risk stratification. Using data from the COG AAML1031 trial, they found that patients with UBTF tandem duplications had a 20 percent lower five-year overall survival, a 15 percent lower five-year event-free survival, and a higher likelihood of minimal residual disease positivity following therapy. These characteristics were independent of co-occurring FLT3 and WT1 mutations.

“Once kids with AML experience a relapse, their likelihood of long-term survival really plummets,” Klco said. “Recognizing at diagnosis that a child has an AML with the UBTF tandem duplication could indicate that they’re at a high risk of relapse, and their leukemia should be treated more aggressively.”

“We suspected that we were missing something in the pediatric AMLs where we could only find a FLT3 or WT1 mutation. We think UBTF tandem duplications are that thing,” he continued. “As we work toward proving that UBTF tandem duplications are really a driver of AML, that will open up opportunities for identifying targeted therapies that could work for this subtype of AML.”

In a Spotlight commentary published in conjunction with this study, Robert Hasserjian, MD, and Valentina Nardi, MD, pathologists at Massachusetts General Hospital, summarized the potential of this work to provide clarity for some cases of AML that previously defied classification. “This study advances our understanding of AML by disclosing a novel genetic subtype with unique biology and poor outcome, until now hidden among the ‘black-box’ group of AML with no specified driver. Therapeutic approaches can be better adapted to the individual patient, with the potential to more effectively eradicate the disease while avoiding undesirable effects of excessively aggressive therapy when not warranted.”