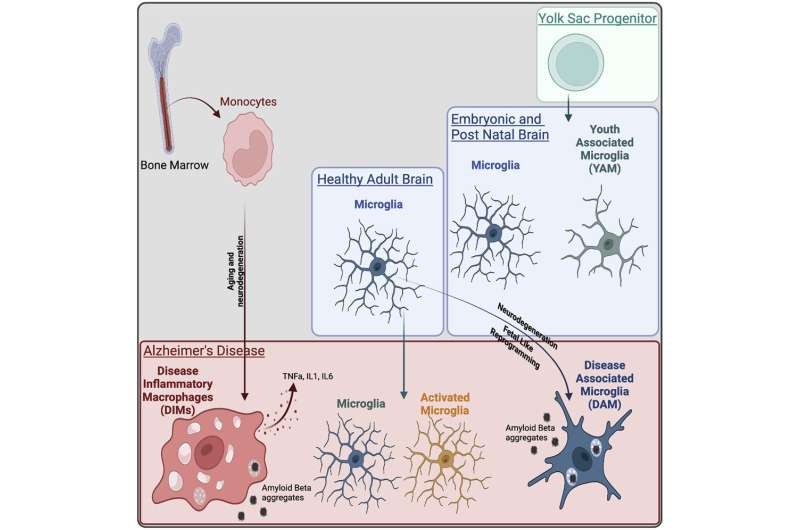 Previously perceived as one population, this discovery of two different cell populations will allow for a better targeting—whether to mobilize the beneficial cell population or block the detrimental one—of relevant macrophage populations in the treatment of neurodegeneration.

In order to determine the two distinct cell populations, the team collected published single cell RNA-seq data sets on the brain in homeostasis, brain development and brain disease, and integrated these with their own data to generate a single cell universe from development to disease. This refined mapping of cell types was focused on the macrophages of the brain, which led to the discovery of the two regions.

They found that the DAM population emerges during neurodegenerative diseases in a TREM2 dependent manner and appear to be beneficial in clearing of amyloid beta and tissue repair, using a gene program identified during normal brain development.

On the other hand, the DIM population emerges during aging and neurodegenerative diseases in a TREM2 independent manner. They derive from monocytes infiltrating the brain through aging and diseases and express an inflammatory program, suggesting a detrimental functions.

These cell populations have been proven to exist in the human brain as well.

Lastly, the study highlights the potential opposite roles of macrophage populations in the brain, and could lead to the redefining of future strategies that will propose innovative treatment for neurodegenerative diseases, specifically targeting DIMs to reduce their inflammatory responses as well as promoting DAM to repair brain damages.

Dr. Florent Ginhoux, senior principal investigator at A*STAR’s SIgN and lead author of the study, said, “Our approach sheds light on brain macrophage heterogeneity and identified a cell population accumulating during aging and neurodegeneration with proinflammatory features. Targeting this population may offer new therapeutic opportunities for Alzheimer’s Disease as well as other brain inflammatory diseases.”