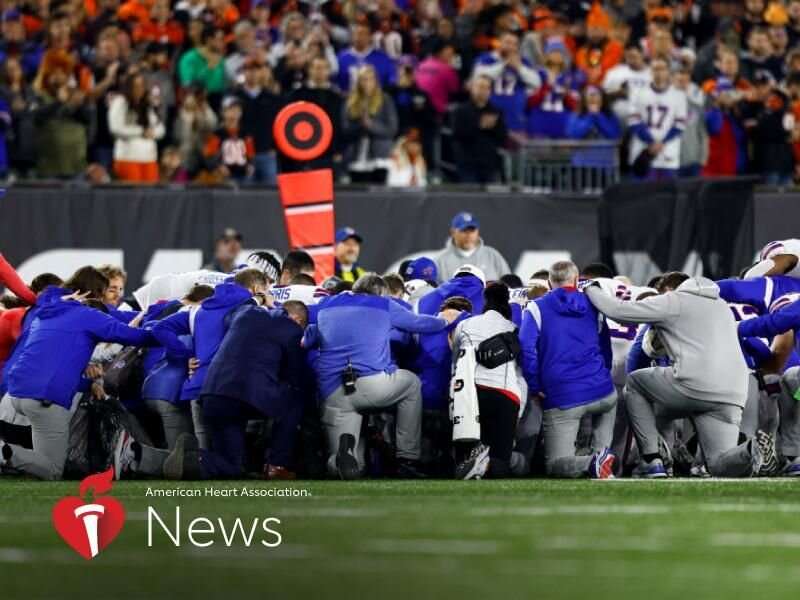 Monday night in Cincinnati, the 24-year-old football player for the Buffalo Bills had a cardiac arrest after making a tackle. In the packed stadium, thousands watched as medical workers performed CPR and used an automated external defibrillator to restore his heartbeat. Players and coaches hugged, wept and prayed as he was taken away in an ambulance.

As of Wednesday morning, he remained in intensive care at a Cincinnati hospital.

“Obviously we saw the coaches, players, and those who tuned into the game all traumatized,” said NFL executive Troy Vincent during a call with reporters Monday night. Vincent, a former cornerback, was among the veteran players who said they’d never seen anything like it.

But cardiac arrest itself, and the trauma it inflicts on witnesses, is not rare.

Each year in the United States, more than 350,000 people experience sudden cardiac arrest outside of a hospital, according to the American Heart Association. The effect on witnesses is “not only tremendous, but far-reaching,” whether a cardiac arrest happens on national television or not, said Dr. Kelly Sawyer, an assistant professor of emergency medicine at the University of Pittsburgh School of Medicine.

“It doesn’t just happen to an individual,” said Sawyer, who led the writing panel of a 2020 AHA scientific statement on cardiac arrest survivorship. “It happens to their family, their friends, lay rescuers who may be just in the area.” It affects those who take action, those who don’t, and those who worry that they could have done more, she said.

For all of them, the “spectrum of feelings, emotions and consequences can be long-lasting,” Sawyer said.

One study, published in 2021 in the Scandinavian Journal of Trauma, Resuscitation and Emergency Medicine, found that of 89 people who witnessed an out-of-hospital cardiac arrest, a third experienced psychological distress.

“We tend to refer to them as the forgotten patient,” said Dainty, who led the writing committee for a 2022 AHA scientific statement on the experience of ordinary people who witness or respond to cardiac arrests.

At the moment of crisis, Dainty said, attention is rightly focused on the person whose life is at stake. But often, as the ambulance drives them away, “what we call bystanders or lay rescuers are left still at the scene thinking, ‘Oh, my goodness, what just happened?’ If they responded and did CPR, they may be fretting over whether they did the right thing, or if they only saw it happen, they may be very confused about what happened.”

A lack of information about the patient can feed anxiety. For those who saw Hamlin collapse, she said, “it would have been quite a traumatic evening,” waiting to learn what had happened, which was not announced until early Tuesday.

In typical cardiac arrest situations, though, it can be worse. Unless a witness is a family member, bystanders might never be told what happened. “That definitely compounds the trauma of it,” Dainty said.

Monday’s event also was triggering for people who have experienced or witnessed a cardiac arrest in the past, she said. “Some of the social media groups that I’m on with survivors and families have been quite, quite emotional.”

Sawyer said the experience of those who witness a cardiac arrest varies depending on their situation. Those who are closely involved might have feelings of guilt as they second-guess their actions.

Jennifer Sumner, a clinical psychologist and assistant professor of psychology at the University of California, Los Angeles who has done extensive research on stress, trauma and heart health, said that after a traumatic event, people may find themselves avoiding others or places that remind them of the event. They might avoid talking or thinking about it but find that the thoughts persist.

They may also experience nightmares, have trouble concentrating or sleeping, or feel disconnected from others or disinterested in things they used to enjoy.

“These symptoms can actually be quite common shortly after experiencing a trauma,” Sumner said.

Some people have physical manifestations, such as headaches, Dainty said. Others might experience sadness. “Everyone didn’t know the player personally, but they can certainly feel for him as a human being.”

Sumner said most people “are quite resilient with respect to their psychological response to these types of experiences.” Even for those who experience symptoms afterward, they frequently resolve on their own with time.

Staying connected with others and remaining engaged in meaningful activities can help, she said, but “there is no one-size-fits-all response to trauma.” People who experience symptoms over the long term that interfere with daily life should consider seeking help from a mental health professional.

Few resources cater specifically to cardiac arrest witnesses, Dainty said. But, she emphasized, worries about trauma or other fears should never dissuade anybody from attempting CPR.

“Anybody, trained or not trained, can help save a life,” Dainty said. According to the AHA, you can perform CPR on a teen or adult by pushing hard and fast in the center of the chest for 100 to 120 compressions per minute. 911 operators also can guide rescuers through CPR.

“We know the power of lay rescuer CPR and response in terms of cardiac arrest outcomes,” Sawyer said. “Our goal is always to try and have more people trained and more prepared to act.”