Britain’s autumn vaccine rollout with the new Omicron-targeting jab is set to start in the first full week of September.

NHS England said care home residents and people who are housebound will be among the first to be vaccinated again from September 5.

All over-75s and the clinically vulnerable will be invited for their fifth shot from September 12, before moving down the age groups as with previous rollouts.

The UK became the first country in the world to approve Moderna’s bivalent vaccine, which targets both the original strain of the virus and the Omicron variant.

Ministers said the 26million people across England who are eligible for an autumn booster will have access to one of the next-generation jabs.

But not everyone will be able to get a dose of the new vaccine, with the original Pfizer, Moderna and Novavax jabs offered at GPs and pharmacies that have run out.

An updated Pfizer jab is also expected to be approved by the medicines regulator ‘in the next few weeks’.

It comes after GPs on Tuesday warned the rollout may be ‘unviable’ because they don’t have enough money or staff.

They are calling for the return of a £10 bonus that was offered to family doctors last year for every jab administered in care homes. 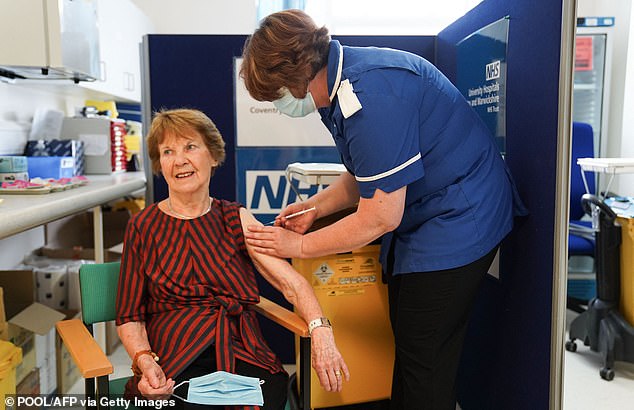 Britain’s autumn vaccine rollout with the new Omicron-targeting jab is set to start in the first full week of September. Pictured: Margaret Keenan, 91, who was the first patient in the world to receive a vaccine, receives her spring booster at University Hospital Coventry on April 22 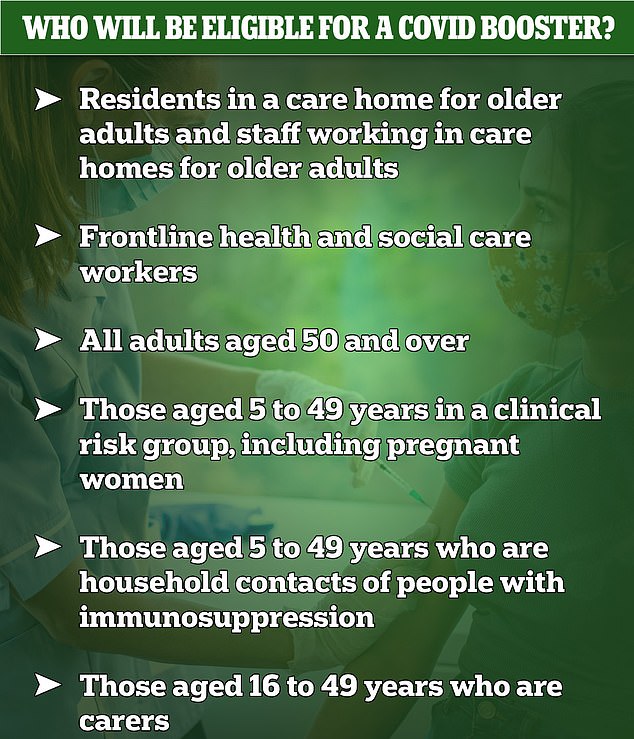 Over-50s, residents and staff at care homes for older adults and frontline health and social care workers will be offered a Covid autumn booster. On top of these groups, five to 49-year-olds who are a clinical risk group, live with an immunosuppressed person or are carers will also be eligible

GPs have warned the autumn Covid booster vaccine rollout may be ‘unviable’ because they don’t have enough money or staff.

They are calling for the return of a £10 bonus that was offered to family doctors last year for every jab administered in care homes.

GPs are being asked to lead the coronavirus jab scheme, a massive national flu immunisation programme and a booster polio jab drive in London this autumn.

Dr Preeti Shukla, of the British Medical Association GP Committee, said: ‘With the current well-documented pressures on GP practices and the reduction in the funding for delivery of these vaccines, we have serious concerns about the rollout.’

She called for returning GP payments to the same levels as last year ‘rather than trying to deliver a booster programme on the cheap’.

Some 29million Britons over 50, and patients with comorbidities, are in line to get Moderna’s new Omicron-specific jab in weeks in a bid to keep pressure off the NHS.

The ‘bivalent’ vaccine — which targets the original Wuhan strain and the new variant — was approved in the UK yesterday, and an update Pfizer jab is expected ‘in the next few weeks’.

But the vaccines have to be kept refrigerated until they are used, like the original mRNA vaccine, which will be more expensive with rising energy costs this year, GPs claim.

People eligible for a booster will be able to book online or through 119 as long as it has been three months since their last dose.

Up to 3,000 sites are expected to be part of the rollout, including GP practices and community pharmacies, and new venues may be added to the scheme.

NHS chief executive Amanda Pritchard said: ‘The NHS was the first healthcare system in the world to deliver a Covid vaccine outside of clinical trials, and will now be the first to deliver the new, variant-busting vaccine when the rollout begins at the start of September.’

More than 126m Covid vaccines have been administered by NHS staff and volunteers since the first jab was delivered, outside of clinical trials, to Maggie Keenan in Coventry in December 2020.

Ms Pritchard said: ‘Our fantastic NHS staff have worked incredibly hard to deliver 126m doses to date and behind the scenes they have once again been preparing to deliver the latest phase with the same speed and precision as we have had throughout the rollout.’

She urged anyone who is invited to take up both an autumn booster and flu jab, ‘to do so as quickly as possible — it will give you maximum protection this winter’.

The NHS will also be rolling out the flu vaccine and encouraging eligible people to take up the offer from the first of the month where possible.

It means that some people may be offered approved doses of the flu and Covid jab which can be given at the same time.

NHS director for vaccinations and screening Steve Russell said: ‘This winter will be the first time we see the real effects of both Covid and flu in full circulation as we go about life as normal — and so it is vital that those most susceptible to serious illness from these viruses come forward for the latest jab in order to protect themselves.

‘We know that our GPs and community pharmacies have been integral to the success of the NHS Vaccination Programme due to their locations and relationships with local communities, and so it is fantastic that so many have opted to be part of the latest phase of the campaign.’

The National Booking Service is set to open during the week of September 5.

It will see the NHS invite those who are most susceptible to serious illness from Covid and those aged 75 and over to book an appointment from that week.

Mr Russell said the NHS will contact people when it is their turn to get an autumn booster and will be inviting the first people outside of care homes to book in ahead of the formal rollout in early September.

The NHS will continue to advise local sites to allow immunosuppressed patients to self-declare and attend walk-ins to make getting the extra protection as easy as possible.

Health and social care staff will also be able to get the autumn booster. 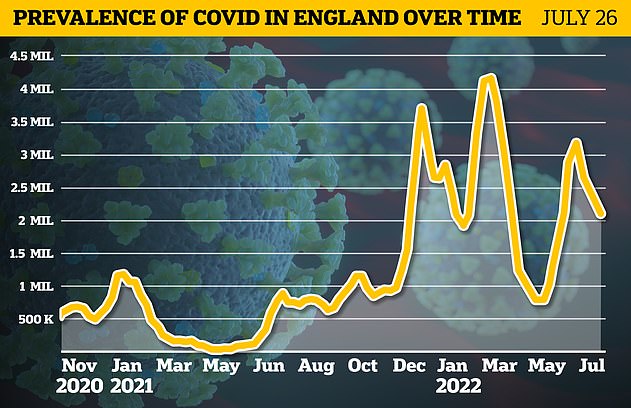 All providers are being asked to ensure their staff are offered the autumn jab, potentially alongside the flu jab.

The JCVI and the Medicines and Healthcare products Regulatory Agency (MHRA) have said the original vaccines continue to provide good protection and people should come forward regardless of the vaccine offered.

Moderna’s new Covid jab is a half and half vaccine, made from the genetic material of the original Wuhan Covid strain and Omicron.

This differs from the current generation of jabs that are based solely on the first strain and are less effective against newer variants.

Health bosses are bracing for one of the harshest winters on record for the NHS, with a triple-whammy of Covid, flu and the cost of living crisis expected to cause a sharp rise in excess admissions.

The booster campaign is among a package of measures to prepare for it, including ramping up bed capacity and increasing the number of 999 and NHS 111 staff to deal with any additional pressure.

While designed to target original Omicron variant BA.1, which ripped through the country at the end of 2021, Modern’s jab is also effective against BA.4 and BA.5.

These newer subvariants were behind a recent meteoric spike in Covid cases, which is now in retreat.

What is Moderna’s Omicron-specific jab and how does it work?

What is it and how it is different?

Moderna’s new jab is based on their current Covid booster jab which has already been rolled out to 9.4million Britons as of July 26.

The new jab is ‘bivalent’, meaning that it contains genetic information from two strains of the Covid virus.

One is the original Wuhan strain, which the current jabs are based on.

The new part is material specifically related to Omicron with aim of boosting protection from newer versions of the virus.

Why is it needed?

This increases the chances of people becoming ill with the virus and needing hospital care.

How does it work?

Like other mRNA Covid vaccines, the shot contains genetic code from the virus which is injected into the body.

This code triggers cells to produce the spike protein found on the outside of the Covid virus.

The body’s immune system then learns to recognise this part of the virus and better fight it off later.

For the new jab, this includes the spike protein of the original Covid strain and that of the Omicron variant.

Omicron had more than 30 mutations which makes its spike protein different than the original Wuhan strain.

How much more effective is the new jab against Omicron?

A Moderna study of the new jab on 800 people found it boosted antibody levels against original Omicron eight-fold.

And in a separate study the jab was found to also be more effective against the currently-dominant BA.5 strain, outperforming the older version 5.4-fold.

Who will get it and when?

The jab will be included in the autumn booster campaign due to start early next month.

This drive will see Britons over the age of 50 younger people who are vulnerable to the virus start to be called for a booster next month.

Other groups included in this rollout  include care home and NHS staff and the household contacts of people who are immunosuppressed, like cancer patients.

The jab isn’t going to be offered to any particular group but will be included alongside other already approved boosters.