They may be associated with decaying, dead bodies.

Yet NHS doctors are increasingly resorting to using maggots to treat wounds and prevent infections.

The last-resort treatment — famously relied on during WWI — sees fly larvae placed on bodies in teabag-style pouches, where they eat any dead tissue and supposedly secrete antimicrobial molecules.

Medics hope the therapy can help counter the global threat of superbugs, a crisis likened to terrorism and climate change.

Sticking maggots on infected wounds gets rid of the need to use antibiotics, which can encourage bacteria to mutate and become resistant to the life-saving drugs.

NHS Digital data show the number of maggot treatments dished out in England has surged by nearly 50 per cent in the last decade.

Yet experts fear nurses’ ‘squeamishness’ may put them off dishing out the treatment more widely. 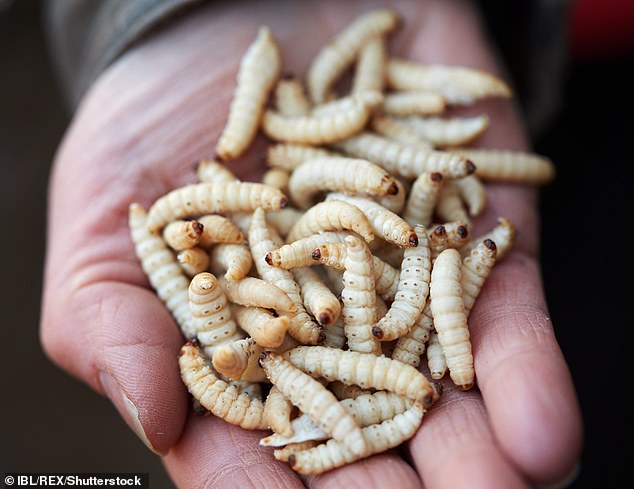 Antibiotics have been doled out unnecessarily by GPs and hospital staff for decades, fueling once harmless bacteria to become superbugs.

The World Health Organization (WHO) has previously warned if nothing is done the world is heading for a ‘post-antibiotic’ era.

It claimed common infections, such as chlamydia, will become killers without immediate solutions to the growing crisis.

Bacteria can become drug resistant when people take incorrect doses of antibiotics or if they are given out unnecessarily.

Former chief medical officer Dame Sally Davies claimed in 2016 that the threat of antibiotic resistance is as severe as terrorism.

Figures estimate that superbugs will kill 10 million people each year by 2050, with patients succumbing to once harmless bugs.

Around 700,000 people already die yearly due to drug-resistant infections including tuberculosis (TB), HIV and malaria across the world.

Concerns have repeatedly been raised that medicine will be taken back to the ‘dark ages’ if antibiotics are rendered ineffective in the coming years.

In addition to existing drugs becoming less effective, there have only been one or two new antibiotics developed in the last 30 years.

In September, the WHO warned antibiotics are ‘running out’ as a report found a ‘serious lack’ of new drugs in the development pipeline.

Without antibiotics, C-sections, cancer treatments and hip replacements will become incredibly ‘risky’, it was said at the time.

Using maggots to clean wounds was first popularised in WWI, when field surgeons discovered soldiers who had been infested with the larvae healed quicker.

The advent of medical antibiotics in the 1940s largely consigned the treatment to history.

Research shows it is effective in treating hard-to-heal wounds and is cost-effective, and the NHS accepted it as a treatment in 2004.

The 1mm bags are placed on top of open tissue, covered with a dressing and left for up to four days as a ‘last resort’ for patients who won’t heal with antibiotics.

But a survey published in the Journal of Wound Care found the ‘yuck factor’ meant health professionals were more likely to be disgusted by maggots than their patients.

Professor Yamni Nigam, an entomologist at Swansea University, said the ‘squeamishness’ will have to be overcome to make the therapy more popular.

She told BBC Radio 4’s Today programme: ‘Nurses that are specialists in wound care tend to have seen maggot therapy and are on board with the idea of using it.

‘Then we have this issue where staff nurses are reluctant to join in.

‘Certainly everybody, I think, has a natural aversion to creepy crawlies and most people tend to have an inherent disgust as far as maggots are concerned.’

She added: ‘Maggots are so efficient and cost-effective.

‘They can turn a stagnant wound that has been refusing to heal for months — within four days they can transform the wound.

‘One of the key things that maggots can do is disinfect a wound. If you’ve got a chronically infected wound, putting maggots [will clear the dead tissue].

‘Then they drink all that slurry through the bag and you remove the bag.’

It claimed common infections, such as chlamydia, will become killers without immediate solutions to the growing crisis.

Bacteria can become drug resistant when people take incorrect doses of antibiotics or if they are given out unnecessarily.

Britain’s former chief medical officer Dame Sally Davies claimed in 2016 that the threat of antibiotic resistance is as severe as terrorism.

Experts estimate superbugs will kill 10million people each year by 2050, with patients succumbing to once harmless bugs.

HOW DO MAGGOTS TREAT INFECTED TISSUE?

Maggots can be applied to infected tissue to feast on the bacteria and dead cells in chronic wounds. As well as cleaning the injury, the larvae also boost its chances of healing.

Although it may make you feel a little queasy, this ancient therapy has actually been used since Biblical times but fell out of favour when antibiotics were discovered.

Maggots were also used during the American Civil War to prevent gangrene.

And in the French trenches of WW1, doctors noticed how wounds with maggots in them were less likely to become infected and healed faster, with soldiers therefore being less at risk of dying from their injuries.

Due to the antibiotic-resistance crisis, interest in the creepy-crawlies has resurfaced.

Maggots do not directly eat damaged tissue but instead release saliva that contains enzymes that break down bacteria and dead cells.

These enzymes also increase the production of chemicals in the immune system that help to kill bacteria.

The FDA approved medical-grade maggots as a ‘medical device’ in 2004 for chronic or non-healing wounds. The NHS also offers maggot therapy for gangrene.

These larvae are specially bred in a lab using eggs that have been treated to remove bacteria. Without this treatment, the maggots may actually introduce infections to the wound.

The maggots are then placed on the injured site and covered with gauze.

Although the larvae are just as effective when loose, covering them with a dressing reduces a patient’s anxiety that the worm-like creatures may be crawling all over them.

The maggots are typically left on for between two and four days, or until they stop eating or become adult flies.