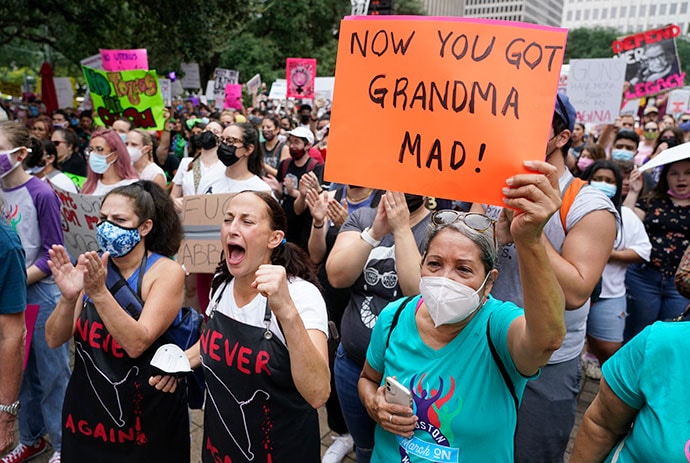 People participating in the Houston Women’s March against Texas abortion ban listen to speakers at City Hall in Houston.

CHICAGO (AP) — Opponents of a new Texas ban on most abortions filed a lawsuit in Illinois on Tuesday after weeks of being thwarted by courts elsewhere in their efforts to block the nation’s most restrictive abortion law.

The latest legal challenge came as the Biden administration waited for a federal judge in Austin, Texas, to rule on a request to halt the law known as Senate Bill 8, which bans abortions in Texas once cardiac activity is detected, usually around six weeks. A hearing was held Friday but there was no timetable on a decision.

Although courts have blocked similar measures elsewhere in U.S., the Texas law has remained in place since early September because it uniquely leaves enforcement solely up to private citizens, who are entitled to at least $10,000 in damages if they prevail in a lawsuit against abortion providers.

A San Antonio doctor who admitted defying the law in a Washington Post opinion column last month was quickly sued — but not by anti-abortion advocates. He was instead sued by former attorneys in Illinois and Arkansas who oppose the law and are trying to force a court to weigh in.

The Center for Reproductive Rights is now asking a federal court in Illinois to consolidate the lawsuits against Dr. Alan Braid and declare the law unconstitutional.

Last month, the U.S. Supreme Court did not rule on the constitutionality of the Texas law, but allowed it to remain in place.