Adoptive transfer of these cells is an emerging area of oncology therapeutics with promising results. Currently, this immunotherapy technique is in late phase clinical testing, and has great potential to treat cancers – mainly blood cancers in humans.

T cells are separated from other cells from the patient’s own peripheral blood, and are genetically modified using a disarmed virus to produce surface receptors called CARs. These receptors are synthetic, and do not exist naturally. These CAR-T cells are then cultured in vitro into hundreds of millions of cells and finally infused back into the body of the patient.

For genetic modifications, retroviral vectors, transposons (DNA sequences capable of changing their positions within a genome), lentiviral vectors, or most recently, homologous recombination following gene editing are used. After adoptive transfer, flow cytometry and quantitative polymerase chain reaction (qPCR) techniques are commonly employed to track these cells. These cells further multiply in the patient’s body. The receptors on their surface guide these cells to recognize and kill cancer cells. 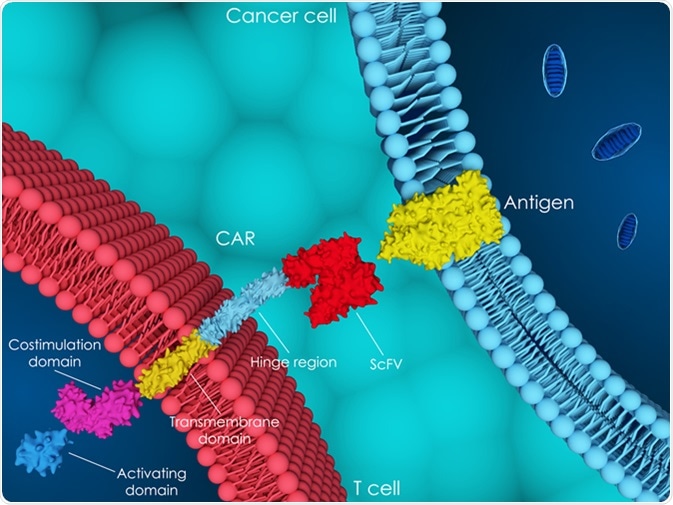 Understanding of their pharmacology is the most important aspect of using these cells effectively for treatment of cancer.

Pharmacokinetics of these cells is not determined by conventional ADME (absorption, distribution, metabolism, and excretion) criteria; rather, it is evaluated by observing the interaction between CAR-T cells and cancer targets. The blood concentration of CAR-T cells rapidly declines within hours after infusion, and this initial decline represents cellular redistribution into the body tissues. Engineered T cells then rise to a maximum concentration (Cmax) in blood, typically within the second week following infusion. This rise is followed by a second, slower fall in concentration over a variable duration of days to several months. T cell engraftment pharmacokinetics varies considerably from patient to patient, and there are many factors which may contribute to these variations. The main factors are prior therapy, disease type, genetics, pre-conditioning regimen, post-infusion therapy, conditions while carrying out expansion of culture, synthetic antigen receptor design, and tumor burden.

To know the anticancer effects of these cells, their structure and interaction with cancer cells need to be understood first. Generally, CAR-T cells target an antigen found on B cells called CD19. However, some patients do not respond to CD19‑targeted therapy. So CAR-T cells targeting CD22 protein are also under development. T cells which target both CD19 and CD22 are also being studied in some early phase clinical studies.

Results from previous clinical trials demonstrate that with the use of CAR-T cells in hematological malignancies, treated patients who were refractory to other forms of treatment effectively achieved a complete response (CR). These cells are also effective in patients with blood cancers which have relapsed or are refractory to existing therapies. Clinical studies are ongoing to evaluate the efficacy of these cells in solid tumors. Migration of these cells into the cancer environment is one of the key factors relevant to the efficacy. To improve the efficacy of these T cell therapies, several strategies are being investigated.

Side effects and their management

The most common side effect of therapy with CAR-T cells is cytokine release syndrome (CRS). CAR-T cells can lead to the massive and rapid release of cytokines into the blood, which may cause a sudden drop in the blood pressure, and dangerously high fever. In many patients, standard supportive therapies are helpful to manage CRS.

The second most common side effect is an “off-target effect”, namely, the mass death of B cells (B cell aplasia). Normal B cells also express CD19 on their surfaces, which help to activate the antibody response so that pathogens are killed.

These normal B cells are also killed by infusion of CAR-T cells. To overcome this side effect, patients must be treated with immunoglobulin therapy concomitantly to provide necessary antibodies for fighting the infections. Another fatal and serious side effect observed recently is swelling of the brain (cerebral edema), but this event seems to be relatively rare. Other side effects related to neurotoxicity have also been observed in clinical studies, but they are all reversible and short-lived.